You are here: Home / Redeeming Theology / The 100 Top Christian Blogs 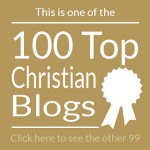 Below is a list of the 100 Top Christian Blogs. If you made it onto this list of top Christian blogs … congratulations! Please let others know with the sharing buttons above.

I will update this list occasionally, so if you want your blog to be considered for future ranking, and your blog is not listed below the list of 100 Top Christian blogs, please include a link to your blog in the comment section. Thanks!

I guess so… sigh…

Disclaimer: I do not necessarily endorse all the views or perspectives of the bloggers on this list. The list contains many Christian bloggers who write from theological perspectives with which I have some disagreement.

Like who? (Let’s see who I can offend…) Calvinists, Charismatics, Conservative Baptists, and Catholics, just to name a few. Remember, I, Jeremy Myers, am the ONLY correct blogger in the world. (I’m KIDDING!)

Anyway, if someone is on the list of Top Christian blogs and you think they are a heretic, don’t burn me for it! Go be a troll on their site… (I’m kidding again!)

How I Created the List of 100 Top Christian Blogs

Below is an explanation of how I went about ranking these 100 Top Christian Blogs.

First, I gathered the list of Christian blogs using these sites:

Second, I removed all “Community Blogs” which had multiple authors. This caused all blogs from Patheos, the Gospel Coalition, and other similar blogs to be dropped from the list. The reason I did this twofold. Many of these community blogs are not accurately ranked by Alexa and SimilarWeb, which are two of the ranking factors I used (see below). But more than this, I wanted this list to honor the individual blogger who started his or her blog from scratch, and has labored away at it for years, slowly building an audience and faithfully writing quality posts which get read and shared. Those huge mega community blogs often overshadow the quality writing and hard work of individual bloggers. So if a blogger was writing on a community blog, I kept them off my list.

Finally, once I had my list of individual bloggers, I ranked them using a variety of factors. These factors include:

The ranking number in the list below is a compilation of these ranking signals. The lower the number, the better the blog ranks.

How to get on this list of Top Christian Blogs

If you are not on this list and you want to work toward getting on it, or if you are on it and want to know what you can do to rise in the ranks of these top Christian blogs, here are six recommendations:

Here then, are the 100 Top Christian Blogs

How to get on this list of Top Christian Blogs

I mentioned these above, but let me reiterate it here:

If you are not on this list and you want to work toward getting on it, or if you are on it and want to know what you can do to rise in the ranks of these top Christian blogs, here are six recommendations: