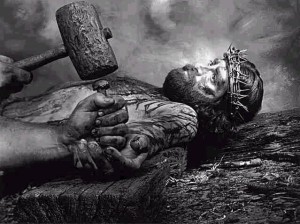 In response to a great question from Chuck McKnight on my post Why God Never Punishes Sin, I decided I had better write a short post about the Greek words kolazo and kolasis, specifically in reference to some of the New Testament uses of the word “punishment.” This post is not exactly a word study of those words, but a general theological clarification for how to deal with some of these tough texts in the Bible that deal with the topic of punishment.

Instead of punishing sin, I suggested that God disciplines and judges instead. Most of the words in the Old and New Testaments which are frequently translated as “punish” can be translated as “discipline” or “judge” instead. Maybe it is splitting hairs, but for me, the concept of punishment seems to imply the inflicting of pain upon someone else for something bad they did to you. I just don’t see that Jesus reveals this kind of God, a God that is vindictive toward His enemies, who inflicts pain and punishment on people because they go against His will.

Although … I suppose their can be painful consequences of discipline. I have been disciplined a lot in life, and as I look back, many of those times were quite painful.

So maybe I should be even more precise…. When I think of “punishment” I am thinking of floods, earthquakes, famines, hurricanes, asteroids, pestilence, and other natural disasters. It is quite common in some Christian circles to say that when a city is flattened by a hurricane, or when an earthquake strikes, or when a tsunami kills thousands, that this is “divine punishment” upon that area and those people.

The same goes for when a house burns down, a child dies, a person gets a terminal disease, or any other such disaster that can happen in life. None of these should ever be understood as God’s punishment. He doesn’t do these things.

These sorts of things happen in the kind of world God has created, especially in the one that has been skewed so terribly by sin. So in a way, these bad things that happen are a result of sin, but not because God is reaching down with his finger and squashing people like bugs because they took His name in vain, or broke one of His other commandments. This is not the kind of God we serve, or the kind of God revealed to us in Jesus Christ.

So my basic argument is this:

Many people say that since God created a world in which sin was possible, God Himself is responsible for the sin that is committed. In a way, God agrees, which is partly why He took the sin of the world upon Himself in Jesus Christ.  But I am getting way off subject here, and into dangerous waters, so let me back up to the real point of this post.

I said in the previous posts that God does not punish. So what then do I do with passages like Matthew 25:46?

And these will go away into everlasting punishment, but the righteous into eternal life.

The Lord knows how to deliver the godly out of temptations and to reserve the unjust under punishment for the day of judgment.

Understand that much of this is still theoretical, but I think of these sorts of passages this way: 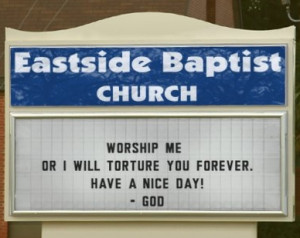 First, note that both texts seem to refer to something that happens to people after they die. I don’t know what sorts of “punishment” God might have in store for people after death, but again, using Jesus as the guiding principle, I highly doubt that God is going to torture people for all eternity by burning them in fire. I do not believe in annihilationism, nor do I believe in universalism, but I also do not believe in eternal conscious torment.

The punishment that happens to unbelievers after they die will involve eternal separation from God, and this in itself is punishment enough. No person on this earth has ever fully experienced full separation from God since He is always fully present everywhere. But those who want nothing to do with God will be granted their desire. Punishment is not something God inflicts upon people, but is a natural consequence of choosing to serve sin and self rather than God.

That is the way I understand these sorts of texts.

God has given humans genuine freedom, so much so that if they choose to reject Him, He honors their choice, including the painful consequences (for them AND for Him) that their choice entails. Punishment is not something God inflicts upon others when He is slighted. No, it is something that happens as a result of choosing our own way rather than God’s. And in a sense, as we see in Jesus on the cross, God Himself gets punished as a result of our poor choices as well. In a sense, when humans get punished for their own sin, God gets punished as well.

One other verse bears mentioning here. It is one of the key verses in my “theology” and I mentioned it a few weeks ago in a post about assurance. Interestingly, this verse also mentions punishment. The verse is 1 John 4:18:

There is no fear in love; but perfect love casts out fear, because fear involves punishment, and the one who fears is not perfected in love. (NAS)

The Greek is a little ambiguous in the phrase “fear involves punishment” which is why you will see some different translations in our various English Bibles. It literally says, “fear has punishment” which doesn’t make much sense, and so translators try to clarify the meaning. Aside from the NAS above, some say “fear has to do with punishment” (ESV, NIV, NRSV, NET), or “fear involves torment” (NKJV), and a  few others. However it is translated, the basic idea is this:

Fear contains the punishment itself. This means that the man who lives in fear (before God) is already punished by this fear. His fear is his punishment. This thoughts may be linked with the express statement in John 3:18 that the unbeliever is judged already. The opposite of fear is love. Perfect love is free from every fear, because perfect love for God drives out fear before Him (TDNT, III:817).

This once again shows that any punishment that results from sin is the natural consequence of sin itself, and is not divine punishment at all. When we know how much God loves us, this not only frees us from fear of punishment, but it also frees us from the desire to sin, because we know that God only wants what is best for us, and His instructions are not to destroy our joy or ruin our lives, but to increase our enjoyment of life, and help us live better, longer, healthier, happier lives. This doesn’t always happen, because we live in a twisted world (cf. the book of Job), but when we experience pain and suffering, it is never because God is punishing us for some real (or imagined) sin against Him.

God doesn’t punish. He restores. He loves. He heals.

And of course, as we see in Jesus Christ, He suffers right along with us, bearing the Lion’s share of the pain in this world.

Hopefully, this email has helped you see that God is not angry with you about your sin, nor is He looking for ways to keep from forgiving you. No, God loves you and forgives you. He is looking for ways to work with you in helping you gain freedom from the power of sin in your life and deliverance from the destructive consequences of sin. If you have areas of sin you are struggling with, know that God wants to work with you in these areas; He is not out to punish you for them.