If you look on the front cover of your Bible, you are likely to see this: 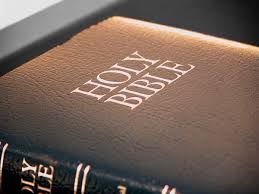 Such wording is so commonplace, we hardly think anything of it.

But are you aware that the concept of the Bible being holy is not found at all in the Old Testament and is rarely applied to the Bible in the New Testament, and even then, in places where the usage is debatable.

Let me put it another way: God is Holy; the Bible is not.

Thinking and speaking about the Bible as “holy” is one reason the Bible has come to be viewed as the fourth member of the Trinity in the minds of many  Christians.

The Holy Bible in Jewish Literature

It is true that Jewish Rabbinic writers often wrote about “the Holy Scriptures,” but it is also true that many Rabbinic writers could be accused of almost deifying the Bible. A Torah scroll, for example, often costs tens of thousands of dollars, and is kept in an expensive container, and if it is ever dropped on the ground or touched with something (or by someone) unclean, it has to be cleansed or buried (but not burned or thrown out).

But this is not how Christians view the Bible (some do, actually, but that is a side topic).

But this Rabbinic reverence for the Scriptures comes not from the Hebrew Scripture itself, but from Jewish tradition that is built up around the Scripture.

The Holy Bible in the New Testament

The same argument could be made for the New Testament.

There are only three places in the New Testament that seem to indicate that the Bible is “holy.” 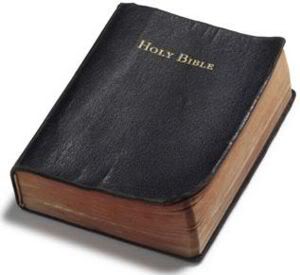 The first is Romans 1:2, but there the word Paul uses for “holy” is hagiais instead of the normal word for divine holiness, hierais. The same usage applies to Romans 7:12 where Paul speaks of the “holy law.”

There is only one place in the New Testament that uses the normal term “holy” (hieros) in connection to Scripture, and that is 2 Timothy 3:15.

But curiously, the word Paul uses there for Scripture is grammata, not the more typical words for Scripture, biblos or graphe. Why does it  matter? Because elsewhere in Paul’s writings, he usually contrasts grammata with pneuma. In other words, the writings of the Law are set in contrast to life in the Spirit (cf. Rom 2:27).

So it appears that in Paul’s thinking, gramma does not refer to the Bible or the Scriptures, but to the prescriptions and commands of the Law (see TDNT I:765).  The gramma is the Law which does not rule in the heart (Rom 7:6; 2 Cor 3:6ff.; TDNT I:766).

It seems then, that the only place in the Bible which speaks about the “Holy Writings,” Paul is writing somewhat about the Jewish religious view of the Law, a view in which he was taught and trained (as was Timothy), but which is proved to be untrue in light of the revelation in Jesus Christ.

As a curious side note, Paul uses a different word for Scripture in 2 Timothy 3:16 (graphe), and a third word in 2 Timothy 4:2 (logos). My personal belief is that Paul was not simply using synonyms to refer to the Bible, but was using three different terms to make a specific point about what Timothy should focus on in ministry (Answer: Jesus – The Logos).

Jesus and the Holy Spirit Transcend the Bible

So regarding the Bible, I agree with what Schrenk writes in TDNT:

“We may thus conclude that the phrase [the holy writings] perpetuates in the church a Jewish and Hellenistic rather than a specifically early Christian usage” (TDNT I:751). “For Paul, the [law] and [writings] are transcended by Christ and the Spirit, and are thus given their true validity” (TDNT I: 761).

and for a statement that really blows me away:

“For early Christianity Scripture is no longer just what is written, nor is it just tradition; it is the dynamic and divinely determined declaration of God which speaks of His whole rule and therefore of His destroying and new creating, and which reaches its climax in the revelation of Christ and the revelation of the Spirit by the risen Lord … The full revelation in Christ and the Spirit is more than what is written” (TDNT I:761).

A few days after I originally wrote this article, I saw that Brandon Chase was thinking and writing about something similar. At one point, Brandon writes this:

So much effort is spent on driving Christians to be in the Word more, to read their Bible’s more, to study the Bible… You know what? Some of you… Some of you need to put your Bible down. You need to walk away. Take a break. Look for and find God’s Word (Jesus Christ) in nature, people, rest, quiet. Learn to hear His Voice apart from the words in your Bible.

You really need to go read his post, and while you are at it, subscribe to his blog. His posts are fantastic!