I often get Bible and Theology questions sent in from readers of this blog. I recently decided to start posting some of my answers to these questions so that if others have similar questions, they can be helped, and so that you, the readers of this blog, can help answer them as well. This question relates to the meaning of the the phrase “Son of God.”

I found your invitation of having a cup of tea with you thank you very much, but alas I live in Pakistan. you asked me to tell you about me. I am 27 years old. I am an Ahmadi Muslim. I am student of comparative study of religions. I am married. And devoted my life for God.

You said I can ask you questions. So I want to know that when Jesus is said to be the son of God or God himself what is the source of this in Bible?

Secondly many people in Bible are called son of God but aren’t taken literally and Jesus himself said to Jews that because revelations of God come to me only in that sense I am a son of God as early Godly people were called. This is mentioned in John 10:34.

I would love to join you for that cup of tea sometime, though I doubt I will ever make it to Pakistan! But who knows….

Please forgive me for not fully understanding the second half of your question…. the part about the Jews and revelation. I seem to understand the first part as a question about Jesus being the Son of God. You also reference John 10:34-36 where Jesus argues that it is not wrong for Him to call Himself the Son of God when in the Law it is written, “You are gods.”

So, regarding the title “Son of God,” many Christians believe that this is a reference to the divinity of Jesus, that is, that this title proves that Jesus was God in the flesh.

While I personally think that such an idea can be read into this title, I don’t think that the title “Son of God” meant “God” to people in the first century. Of course, nobody (back then or today) believes that “son of God” means that God gave birth to a son or had a son after intercourse with a human female. Such an idea is foreign to reason, tradition, and Scripture. Some people accuse Christians of believing this, but I have never heard or read of any Christian who does.

So what does it mean when Jesus is called the “Son of God”?

To find the answer, we actually have to ask is what would it mean for any human to be called the “son of God”? Why do I say this? Because Jesus didn’t make up this title out of thin air.

As you have pointed out, others in history bore this title. The term “Son of God” was used occasionally for angels (Genesis 6; Job 1:6), for Israel (e.g., Exod 4:22), and sometimes for the king (such as 2 Sam 7:14, Ps 2:7 and Ps 89:27). Many in the Qumran community used the title to refer to the coming Messiah, even though none of them believed that the Messiah would be anything other than a specially-anointed human. All of these uses show that the term “Son of God” is not equivalent to “God” but is closer to meaning “of God’s family” or “having divine authority and purpose.”

However, it is also critical to point out that there was one person alive at the time of Christ who was famous for having taken the title “Son of God” for himself, and it wasn’t Jesus.

Who? The Roman Emperor Caesar Augustus. He had taken for himself the title “son of god” (Latin: imperator Caesar divi filius). Not only that, the title “Augustas” is a religious title meaning “Majesty” or “Illustrious One.” He also claimed to be “the firstborn head” of the Senate gathering (Latin: primum caput). During his reign, he began requiring Roman citizens to pay homage to him, not only through taxation, but also through pledging their allegiance with the phrase “Caesar is Lord.”

Anyone who has read the New Testament should recognize the parallel claims of Jesus. The New Testament everywhere portrays Jesus to be the son of God, the firstborn head of the church, and those who follow Jesus are called to proclaim “Jesus is Lord.”

In this way, when using terms like the “son of God” about Jesus, the New Testament writers were certainly making theological claims about Jesus, but more than that, were making political claims about Jesus. In using titles like “the Son of God” for Jesus, the early church was saying that everything Caesar claimed for himself was actually only true in Jesus Christ. In taking these titles from Caesar and giving them to Jesus, the early church (and Jesus Himself) was subversively mocking the power claims of Caesar and the Roman Empire.

So does this mean Jesus Wasn’t God?

Now, does any of this mean that the term “son of God” does not imply that Jesus is God? No. To the contrary, the phrase “son of God” came to be understood by Paul and later New Testament writers as referring to the divinity of Jesus.

But I don’t think it necessarily meant this initially. No Jewish person would think that an angel was God, or that Israel was God, or that a king was god, but the term is used of them all. But through the ministry, life, teaching, death, and resurrection of Jesus, people came to see that Jesus was more than just a man. He was God in the flesh. He was Immanuel, God with us. As such, they added additional meaning to the term “Son of God” so that it now refers to Jesus being God incarnate. 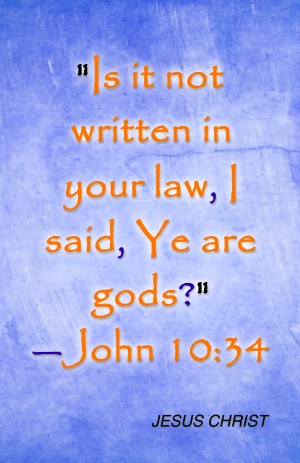 Essentially, Psalm 82 is where God, the judge of all, sits in judgment on corrupt human judges. Human judges have authority to judge, but their authority comes from God. In that sense, they can be called “sons of God.” They are sent with His authority.

So anyway, in Psalm 82, God, the de facto authority, shows up to condemn and judge the human judges, who have been using their de jure authority to make unjust judgments. They have not been helping the poor and fatherless, or the afflicted and needy. So God judges them, and says that although they are “sons of God,” that is, although He has given some of His authority to them to make judgments, they will still die like mere men (82:7).

This helps us understand what Jesus is saying in John 10:34-36. The religious leaders of His day also had de jure authority. Their authority derived from God. But they were misusing it and abusing their position of authority to make unjust judgments.

So Jesus challenged them on their judgments, and when they God upset, and asked Him by what authority He was doing and saying these things, He said that He had authority as a “Son of God.” What authority is that? Interestingly, it is the de jure authority! I believe He could have claimed de facto authority, but in this case He does not. Why not? For many reasons, but one is that Jesus knew His opponents were trying to bait Him, and He refused to take the bait. Instead, He claimed to have the same de jure authority that they had, but insisted that they were misusing and abusing their authority. He still made His point, but without falling into their trap.

This answer is probably more than you thought you would get, and I apologize for that.

I just feel that there are lots of Christians going about teaching sloppy ideas and careless theology, which then gets us in trouble when thinking people of other religions challenge us on our beliefs. For this reason, I try (but am not always successful) to be extremely careful in how I word things. But that usually leads to long and wordy answers like this one…

How do you understand the title “Son of God”?

So have you studied or read much about the title “Son of God”? What do you think it means? How do you understand it? How would you answer the questions posed above? Weigh in below!