You are here: Home / Choosing My Religion

Have you ever wondered how you came to hold the beliefs that you do about God, eternal life, sin, and salvation?

Though I have not done an official survey, it seems to me that the number one determining factor for what “religion” a person belongs to is where they were born.

I thank God all the time that I was born in the United States and to a Christian family so that I am now a follower of Jesus.

Which religion would I choose?

But I sometimes wonder “What if…?”  What if I had been born elsewhere? What if I could choose a religion other than Christianity? (Okay, okay, I know that Christianity is not exactly a “religion,” but for the sake of argument, let’s just call it one.) Which one would I choose? 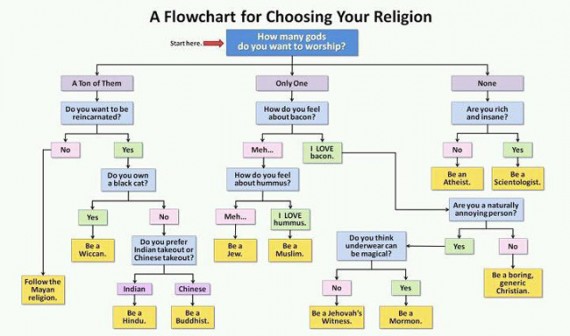 As part of my job, I get to work with and observe people from all different religions, and I have to say that I understand why people argue that “all religions are the same.” From the outside, they all do look pretty similar. Sure, there are differences, such as which hats the religious leaders wear, what day they light candles on, and in what posture they pray.

Christianity, when properly understood and practiced, is unique in its approach to God, sin, salvation. We are the only “religion” that has a true concept of grace. (Though most Christians, I would argue, do not properly understand or practice grace.)

So if I wasn’t a Christian, what would I be? The truth is that none of the other religions hold any appeal for me. So I suppose I would be an atheist.

But is atheism a “religion”? Not really. It is certainly a belief system, but is not really a religion. It is the absence or rejection of religion.

Whatever religion I chose, it would have to appreciate study. I love to study, read, write, and think, and that would be important for me.

Also, I would want it to be a joyful religion, which understands the value of laughter, and the importance of sharing meals with others. It needs to enjoy life.

It needs to value the lives of other people, and see that all humans are worthy of dignity and respect, regardless of beliefs and behavior.

This religion would need to view men and women as equal partners in life, and treat children as precious gifts from God. There could be no tolerance for the subjection of women or the mistreatment of children.

There are other things that are important as well, but these are some of the top things I would look for in any religion.

There aren’t many religions that value these things. Even Christianity (as a religion) often fails in these areas. 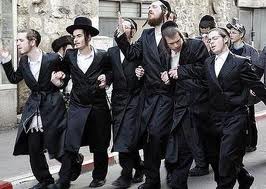 But if I was forced to choose a religion other than Christianity, I think the religion that comes closest to having many of these values and traits is Judaism. They view Scripture study as an act of worship, and center life around a cycle of feasts and celebrations. Many strands of Judaism love to dance, sing, laugh, and enjoy life with others. Jewish people do tend to understand the sanctity of life for all people, but it does not seem (from my observation) that women and children are always shown the same respect as men.

In the end, I don’t think I would make a good Jew. I like pork and cheeseburgers and often like to take a daytrip or mow my lawn on Saturday. But if Christianity didn’t exist, and atheism wasn’t an option, I suppose I would be a reluctant Jew.

This post is part of the September Synchroblog. Here is a list of other bloggers who wrote on a similar topic for this month. Go read them all!

Are you a blogger? Make sure you join us in future synchroblogs. It’s a great way to meet other bloggers, as well as get backlinks and readers for your blog.