You are here: Home / Redeeming Theology / The Date Jesus Will Return is Finally Revealed!

I know the date that Jesus will return!

I figured it out! The math was always there for people to see, but in these last days, God has seen fit to reveal the truth to me, His chosen prophet, of the exact day that Jesus will return! It is privilege to be the first person on earth who knows when Jesus will return.

Here is how the Holy Spirit helped me figure it out:

When Jesus will Return According to Daniel 12

Later in Daniel 12, he writes about a similar period of time, but this one is 1290 days. Many people have speculated about why this period of time is 30 days longer than the 3 1/2 years mentioned earlier in the chapter, but the reason will be obvious in a moment. But for now, we should also recognize this second period of 1290 days as another 3 1/2 years, though this time is is 43 months.

So you take the 1260 days and the 1290 days and add them together, and you get 2550 days. As all prophecy experts know, this is not referring to days only, which would be about 7 years, but also to a period of time in years. So Daniel is making a prophecy of something that will happen 2550 years in the future. But when did the countdown begin?

Well, thankfully, Daniel tells us. In Daniel 9:25, we are told to begin counting the years until the Messiah comes when the decree goes forth to rebuild Jerusalem. So if we want to know when Jesus will return, we begin counting when the Jewish people were told they could begin rebuilding Jerusalem. When did this happen? This decree first went out under Cyrus in 536 BC.

But we can do better than that, for Daniel is not done. He mentions one other number that must also be considered.

As all Bible students and prophecy experts know, Daniel goes on with some other number in Daniel 12. He does not just mention the 1260 days and the 1290 days, but he ends his book by referring to 1335 days (Daniel 12:12). Now what is this? 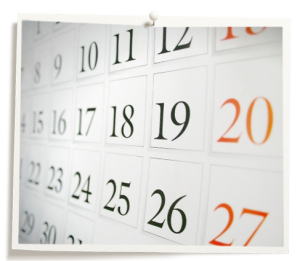 Again, scholars have tried to determine what the significance is of this last set of numbers in the book,  but to no avail. Why did they have trouble? Because the words of this book had been sealed up until the end of time (Daniel 12:4, 9). But now that the end of time is upon us, the meaning and significance of these words have been revealed to me. I now know not just the year that Jesus will return, but also the very day! And the 1335 in Daniel 12:12 is the key.

Now, there are two other things that must be recognized about the Jewish calendar. First, all their months are only 30 days long. So although their years have twelve months, their years only have 360 days, not 365 like our Gregorian years. To make up for the difference, they have leap years where every so often (7 times in 19 years), they add an entire month to their calendar! The Gregorian leap year simply adds one day to the end of February every four years, but the Jewish calendar adds an entire month on to the end of their leap year. This month is called “Adar 2” and is considered to be a lucky month.

Well, guess what month the Jewish leap month of Adar 2 falls on? That’s right, March! March is, of course, the 3rd month in our calendars! God, in His infinite wisdom, knew not only to include the Jewish year and month, but also the Gregorian year and month. Why? Because Jesus will return not just in fulfillment of Jewish prophecies, but for Christian prophecies as well, and to bring peace to the whole world.

But we still have one number left, the 5 in 1335. By now, it should be obvious what the 5 refers to. It is tell us the exact day that Jesus will return – the 5th day of March.

So all of these numbers show this:

You might be wondering why I know this is correct and why God chose to reveal this to me instead of to you. We’ll I’ll tell you why. I have three daughters. Two of them, the first and the third, were born on March 5. Is it coincidence that the date on which Jesus will return is the very day on which He chose to have two of my daughters be born? How rare is it to have two children (who are not twins) born on the same exact day! It is extremely rare, but in God’s providence, it now makes sense why He did that, because He wanted to use it as a sign to show me the day that Jesus will return.

And just one final confirmation. I decided to see if there was any evidence online that Jesus will return on March 5, 2014. So I punched that date into Google, and I clicked on the very first search result. Where did it take me? To a page that had almost nothing on it, but this:

[THERE USED TO BE A COUNTDOWN TIMER HERE….]

Wow! Can you believe it?

…No, you probably can’t.

Yeah, I don’t either.

THIS IS ALL A JOKE!

Well, not the part about me having two daughters born on March 5. That part is true. But the rest is completely false and fabricated….

I wrote this post because the July 2013 synchroblog theme was to share a story about the best prank you have ever done. I have pulled a few pranks growing up, but rather than share them, decided to pull a little prank right here on my blog. Usually the synchroblog topics are pretty heavy, but since it is summer, we decided to lighten things up a bit. This is my attempt.

I hope you enjoyed reading it as much I enjoyed writing it! If you want a few other laughs, try some of the other contributors to this month’s synchroblog:

March 6, 2014 Update: Obviously, Jesus did not return on March 5, 2014. I never thought He would, of course. As I stated above, this entire post was just a prank for the summer synchroblog. A little light-hearted fun.

But be warned: There are many out there who will want to set dates and declare that they know when Jesus will return. Don’t believe them! They don’t know! Not even the angels know. People who set dates are usually trying to manipulate you into following their ministry, supporting them financially, or accepting them as some sort of authority in your life. Don’t get sucked in!

I am reminded of something one of my seminary professors told me: “We must live each day as if Jesus is coming tomorrow, but plan as if He will not return in our lifetime.” Good advice.