You are here: Home / The Heresy of Christianity 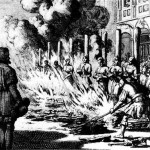 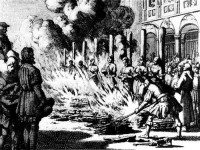 Call me a heretic if you want, but I no longer believe in heretics. I do not think heretics exist. I do not believe there is such a thing as heresy.

No, I am not trying to be cute like when people say “God doesn’t believe in Atheists.” I’m being serious. I’ve been mulling this over for a while, and while I may have missed something in my research, I cannot find any reason to justify the Christian belief in heresy.

Let me tell you why.

The word heresy comes from the Greek word airesis. Do you see that? The word “heresy” is not a translation of a Greek word, but a transliteration, just like baptism (baptizo) and evangelism (euangelizo). Translators will often transliterate a Greek word when they are not fully sure how to translate it. They just take the Greek letters and change them into English letters, and call it good.

But it’s not so good for English readers who don’t know what’s going on behind the text. In the case of airesis, the translators knew what it meant, and most of the time, in most translations, it appears as “sect,” “division,” or “faction.” Like where? Most prominently in Acts, for example.

Yes, that’s right. The Christians were “heretics.” They were a sect within Judaism. This isn’t necessarily a negative thing. It just means they were a group that had some different beliefs and practices than other groups within the same big tent of Judaism.

Outside of Acts, there are only three more uses of the word. The first two, 1 Corinthians 11:19 and Galatians 5:20 both indicate that “divisions” and “factions” within Christianity will happen, but are not desirable or helpful. We are to be unified in the Spirit.

I’m sure people have different perspectives on these verses, but a quick perusal of the various translations show that there is a wide diversity of opinion on how to translate these words of Paul. The best and most contextually consistent translations indicate that Paul is talking about how genuine Christians can become divided, and we must protect ourselves from this.

So denominations are probably not God’s ideal pattern…

The final passage is the closest we come to a designation of “heresy” as someone condemned by God to eternal damnation in the Bible. It is 2 Peter 2:1. In this verse, Peter equates false prophets and false teachers with the destructive heresies they bring, and says that the end of these teachers will be destruction.

In the context, it seems best to understand the “destructive heresies” as “destructive divisions” that false teachers and false prophets create in a fellowship of believers. The havoc they wreak on a Christian body of believers will be returned on their own body. Therefore, the “heresies” are not their false teachings, but the divisions the teachings cause. The distinction is small, but it is there.

So in light of all this, we see that a heretic is not a who, but a what. A heretic is a division, a faction, a sect, a different group.

Where did heresy come from?

So ultimately, where did heresy and the charge of “YOU HERETIC!” come from? It came from early church leaders who wanted to exert their power, authority, and control over other people.

A church leader would have a good following of people in a particular town or city, and some other teacher would arrive in town, and begin to teach Scripture in a different way or with a different emphasis. Confusion would rise in the students, with the end result being that both teachers condemn the other teacher and all of his followers to the everlasting pit of fiery doom. Why? To maintain his own power, control, and authority.

Eventually, people started killing each other, small wars broke out, and finally, government officials had to step in, take sides, and in order to maintain peace, declare one faction the “winner.” And that, in super-simplified fashion, is how we have developed “heresy” and “orthodoxy.”

So does this mean it’s a theological free-for-all? Is everything okay? Can you believe anything you want? Not exactly. Beliefs still matter.

This last passage we looked at above (2 Peter 2:1) clearly indicates that there are false teachers and false prophets. While we do not have any exegetical basis for calling them “heretics,” we nevertheless can see their teachings as dangerous for Christian unity without condemning them to hell (They might end up there, but it’s not our job to send them).

So how can we disagree with others, but remain unified? By remembering four things.

1. We must teach the Bible as accurately as we know how. The Bible is still our guide for Christian belief and practice. It is our authority. It is not a doctrinal statement, but it is a history of what God has done and what those who have gone before us have believed and practiced. It can help us as we try to follow the teachings and examples of Jesus today.

2. False teachers will come – and they may be us. We must recognize that if someone comes into our group who teaches differently than we do, one of us is a false teacher – and it might not be the other guy. None of us are 100% correct in our doctrine. Every single one of us holds to false teachings and false ideas.

So maybe, just maybe, the person who sees things a bit differently than us, is sent not by Satan, but by God. It might be worth considering their ideas.

However, the simple act of even considering the ideas of others will often result in division among a group of believers. At some point, a group probably needs to put their foot down and say, “This is what we believe. This is what we will die for. We will not consider anything contrary to this.”

But we do not condemn the other person as a heretic, to burn forever in the lake of fire. No, we treat them with firm respect and love. Why? Because of the third thing to remember.

3. Jesus is the center of our galaxy. No, Jesus is not at the physical center of the galaxy. When many people think of “church” and the relationship of all people to Jesus, they think of some sort of a club, where some people are “in” and some people are “out.” There is some sort of imaginary line that is drawn, and everybody on one side of the line is “good with God,” and everybody on the other side needs to “get right with God.”

But when I imagine all people everywhere and our relation to Christ, I think of a galaxy. There are no boundaries. There is no perimeter. There is just the center, Jesus, and everything else swirls around him. We measure ourselves, not by who is in and who is out, but by proximity to Jesus. None of us are in the center, therefore, none of us have arrived. We are all, hopefully, drawing closer to his gravitational pull each and every day.

Viewing people this way keeps us from creating clubs of our own imagination, and allows us to view all people with dignity and respect. We are not trying to determine if the other person is “saved” or “unsaved,” a “heretic” or “orthodox.” Instead, we look for ways that we can draw that other person closer to Jesus, and how we ourselves can be drawn closer to Jesus through the other person.

In this way, we begin to view our beliefs differently.

4. Beliefs are truths we hold firmly with an open hand.

Beliefs are no longer litmus tests to help us judge people. Beliefs are ideas or convictions that help draw us and others closer to Jesus. Beliefs guide the way we live, the way we think, and the way we act. So we hold our beliefs firmly.

But we also hold beliefs with an open hand. Since we also want to be drawn closer to Jesus, we recognize that we do not yet have all the truth, and anyone — absolutely anyone, even our worst enemy — can be used by Jesus to draw us closer to Him.

So how do we hold our beliefs firmly with an open hand. Imagine it is like carrying a paper plate full of food in a brisk wind. When the winds of doctrine try to blow our beliefs to the ground, we turn our open hand into them, using their ideas to force our beliefs more firmly against the hand.

In this way, the genuine but gentle consideration of other ideas either shows us where we were wrong, or reinforce what we already believe.

There is so much more I want to say on this, but it will have to wait. This post is already way too long.

The bottom line is that the charge of heresy is a charge that people use to strike fear into the hearts of their followers. Therefore, is it not done to defend the truth, for truth must be spoken in love, and there is no fear in love.

I do not believe in heretics. But if you want to disagree, that’s okay. I’m turning my hand into the wind. Let me hear what you think.