You are here: Home / The Impossibility of Properly Understanding Scripture 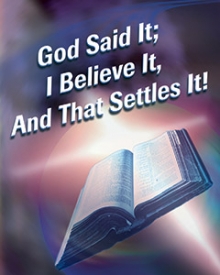 I love to study Scripture, but I sometimes wonder if the effort is worth it. Some days I become more and more convinced of the impossibility of understanding Scripture.

This was impressed upon me even more so yesterday when I sorted through my stack of mail and found a newsletter from a church in Duluth, MN which has devoted several pages in the last four issues to refuting a journal article I published in 2006.

I am not trying to pick a fight with them, so I will not name the church or the publication. If you want to know what article they are attempting to refute, it is this: “The Gospel is More than ‘Faith Alone in Christ Alone‘.”

With every issue this church sends out, I am amazed at how fully and completely they misunderstood what I was saying, and as a result, misrepresent what I actually believe. To their credit, they did contact me before they ran these articles to give me the opportunity to respond, but I soon found that they were not too interested in my response, and were only fishing for more ammunition to use against me. They had made up their mind about what I believed, and nothing I could say would convince them otherwise. At one point, they told me that  since what I wrote contradicted what I was telling them on the phone, I was lying in one of the two places, and so they were going to go with what was written.

I tried to explain that what was written was in full agreement with what I was saying, but that the article had been misunderstood. Maybe it was my fault for a poorly-written article. If so, I accept full blame for being unclear, but at least they could honor my desire for them to understand and properly present my position.

But they went to press anyway with a series of articles that includes numerous quotes ripped out of context and many faulty and illogical accusations about me and my theology.

But it recently occurred to me: I wonder if we often do the same thing to the Bible?

Actually, I don’t wonder. I am certain.

I often think that as God listens to us as teach and explain the Bible, He is shaking His head and muttering to Himself, “Where the heck did they get that from? I said nothing of the sort! Talk about ripping my words out of context!”

Of course, some might say the analogy is flawed because we have the Holy Spirit to help us understand Scripture, whereas I cannot send my spirit to Duluth to help them understand my ideas.

This is true enough… until we consider all the conflicting reports that the “Holy Spirit” supposedly tells Christians from all over the world. I have literally had two Christians in my office yelling and screaming at each other about whose revelation from the Spirit was correct since He “revealed” the opposite thing to both men.

In the end, we are right back where we started. Understanding Scripture is not as straightforward as reading what it says. No book in history is like that; let alone the Bible.

So next time someone tells, “God said it. I believe it. That settles it” the best response is, “Yes, but what is it that God really said?” 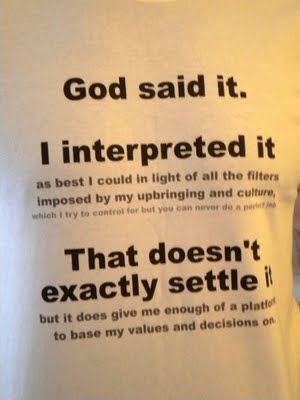