You are here: Home / Sermons / Sermons on Matthew / Matthew 5:1-2 – The Discipleship Manual

A man was once talking to a great scholar about a younger man named Chris. He said, “Chris tells me that he was one of your students.” The professor’s answer was devastating, “He may have attended my lectures, but he was not one of my students.” Are you a student of Jesus, or did you just sit through the class?

Matthew 5-7 – The Sermon on the Mount

This study begins a verse-by-verse exposition of Matthew 5–7, which is the Discipleship Manual for Christians. Matthew 5-7 does not tell us how to receive eternal life; it tells us how to follow Jesus after we already received eternal life.

While there are truths in Matthew 5-7 for non-Christians to glean, this sermon of Jesus is primarily for believers who are following Jesus on the path of discipleship.

One of the supreme handicaps of modern Christianity is that there are so many believers in Christ, but so few disciples (students). Many don’t even know there is a difference. A believer is someone who has believed in Jesus Christ alone for eternal life. A disciple, on the other hand, is someone who is a devoted student and follower of Christ. As such, it is possible to be a believer, but not be a disciple (cf. Luke 19:11-27). It is equally possible to be a disciple but not a believer (Judas).

The goal is to be both. All believers should immediately begin down the path of discipleship (Matt 28:19-20). Traveling this path begins with understanding that there is a difference between believing in Christ for eternal life and following Christ for the abundant life (John 10:10). If we do not realize the distinctions between becoming a believer and living like a disciple, most of the New Testament will not make sense.

If, on the other hand, the Sermon is intended to be a Discipleship Manual, then the high standard of living presented by Christ makes much more sense. 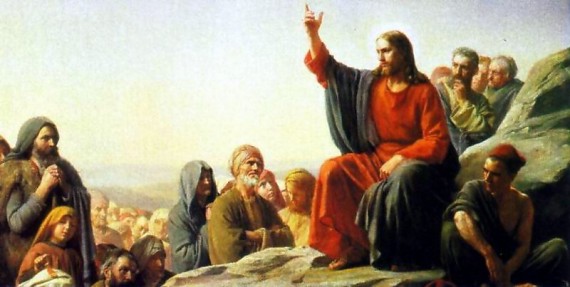 Matthew 5:1-2 – The Setting for the Sermon on the Mount

Matthew 5:1-2 provides the setting for the Sermon on the Mount. These verses clearly state that Christ’s words are intended for His disciples. Many crowds of followers (another synonym for a disciple) were coming to him (cf. 4:25), so Christ went up on a hill, sat down, opened His mouth and began to teach. The phrase opened His mouth is not simply a picture of Jesus speaking. The phrase is used only of prophets when they were about to teach or speak an oracle from God (cf. Ezek 3:27).

As a good student (disciple) of the Word, you might remember that in the parallel account in Luke 6, Jesus is said to have gone down and stood at a level place. How can Matthew say Jesus went up and sat, when Luke says He went down and stood? Assuming that these are the same events, there are three possible explanations.

First, it is possible that Luke’s description occurs prior to all the healing, whereas Matthew’s describes what Jesus did after the miracles.

Second, it is possible that Jesus actually preached two different sermons at two different occasions, though in the same location. Most preachers recycle sermons; why couldn’t Jesus have done the same thing?

The preferred possibility, however, is that the mountain in Matthew 5 only refers to a general area where everyone was, while the level place in Luke 6 denotes a particular spot on the mountain from which Jesus spoke—sometimes sitting, sometimes standing. I have been told that if you visit the site in Israel where Jesus preached this famous sermon, the mountain slopes up, then levels off, then slopes up again. It is easy, when comparing these two texts, to see Jesus performing miracles near the peak of the mountain, then coming down to the level place to preach. Such a position up on the mountain would make a natural amphitheater so that all could hear Him clearly.

The reason I begin our study of the Sermon on the Mount with such an issue is because a true disciple of Christ seeks to know and understand God’s Word. There is no such thing as a disciple who does not carefully study the Bible. Difficulties and questions do arise, but the thoughtful and prayerful student will always discover an answer.

Don’t just attend the lecture, become one of Christ’s students.