You are here: Home / Why I Joined the NRA

This post is part of the March Synchroblog, which is on the topic of God and Guns. Check back tomorrow to get a list of other contributors to this hotly debated topic.

Would Jesus own a gun? Probably not.

On the one hand, Jesus ate meat (lamb and fish at least) and probably had no qualms about killing animals for food.

But on the other hand, I doubt Jesus would ever hunt purely for the sport of it, and I definitely don’t think Jesus would own a gun for self-protection. When He says that if someone wants to take your cloak, give him your tunic as well, or when someone strikes you on one cheek, turn to them the other also, it stretches the imagination to think that He would be fine with killing someone when they try to do more than slap you on the cheek or take your cloak.

So as a follower of Jesus, why did I recently join the NRA? 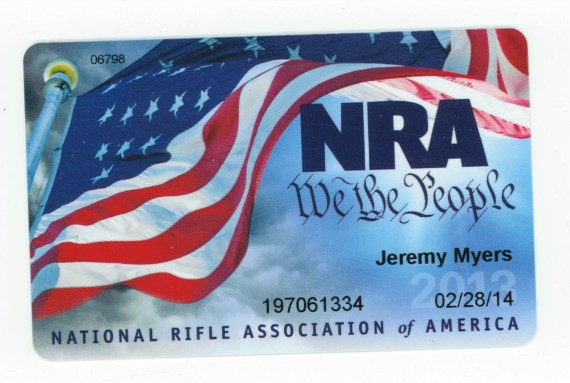 Well, it is not because I am a true fan of the National Rifle Association or because I own guns.

Nor am I in favor of every citizen in American owning a gun. I’m not. For example, the guy in this news story probably should not own a gun: 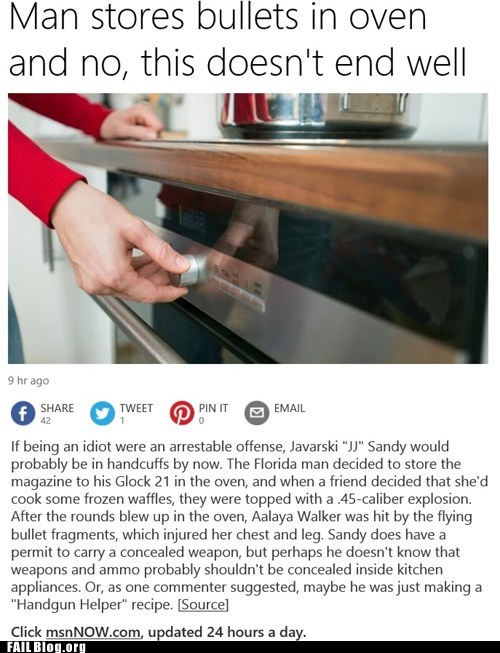 Yeah, some people should not own guns…

So do you want to know why I joined the NRA?

I am tired of the simplistic, knee-jerk reactions coming out of the mouths of politicians every time there is a national crisis involving guns.

Both sides are terribly wrong.

Under some political leaders, when a violent catastrophe happens, the rallying cry is, “Let’s go kill them all!”

But under other political leaders, whenever there is a national disaster, the rallying cry is, “Let’s take all the guns away!”

Both reactions are akin to sticking our heads in the sand.

Do I think that we should have a national conversation about increasing violence in our cities and schools? Absolutely.

But do I think that we can decrease violence in our cities and schools by banning guns altogether (or certain types of guns)? Absolutely not.

Look, even more safety courses, background checks, and negligence penalties would not stop the violence.

If you look at almost any mass shooting from the past ten years, almost any situation of workplace violence, and most of the murders and homicides that takes place in our cities, relatively few of them would have been stopped if we had better gun control, background checks, or more safety courses. In almost every case where guns are used to kill other people, either the people who do the shooting were using illegally-obtained guns anyway, and so better gun control wouldn’t have stopped them from getting the guns in the first place, OR the people shooting the guns would have qualified to own guns by any proposed gun control standard.

In other words, even if we passed any of the current gun control regulations that are currently being proposed, none of these regulations would have kept guns out of the crazy maniacs who shouldn’t have them in the first place, nor would they have kept the sane (and seemingly safe) maniacs from doing what they did with the guns they had legally obtained.

Some people who recognize this say, “That’s why we shouldn’t have any guns at all!” Okay, let’s consider that idea. We don’t have to look far. When you look at modern cultures that have strict gun control laws, the crazy maniacs who are set on killing people just use other tools to kill people, like bombs, machetes, and cars.

The problem isn’t guns. It never has been. People who want to kill people don’t need guns to do it.

And that is why I joined the NRA. I don’t agree with most of what they stand for or how they spread their message, but one thing I do agree with, which is something they have said over and over again: “Guns are not the problem. Let’s have a discussion about violence.”

Of course, I don’t think their solutions would be my solutions, but still, I don’t want to blame guns, or a lack of gun control, when these are not the problems at all.

The Problem is People

So when people say, “We need to have stricter gun control to stop the violence!” what they are really saying is, “We don’t want to admit the true problem in our society, and so we are going to invent a culprit and then ban it so that people will think we are fixing the problem.”

But it won’t work. It has never worked and never will.

I hate to sound hyper-spiritual, but the only real solution is Jesus.

Of course, I don’t expect (or want) the NRA to push Jesus on people. Jesus and guns don’t mix so well. But I also don’t want people to blame guns for our problems. Guns should not be a scapegoat, but maybe if we keep guns around, we can shoot the scapegoat and deal with the real issues that cause violence, issues such as broken families, class warfare, racism, drug and alcohol addictions, violence in movies and video games, and moral issues such as envy, jealousy, greed, and rage.

Other than Jesus, there are no long-term solutions to any of these problems, so let us not think that getting rid of guns will fix (or even improve) any of these issues.

That’s why I joined the NRA. It is not because they are the solution. They aren’t. But at least they seem to recognize that guns are not the problem.

As some of the comments started coming in below, I decided to post some infographs and statistics about gun violence. Below are a few. And note that these are from FactCheck.org and the FBI. Note that although gun ownership is going up, gun murders, aggravated assault, and gun robbery are all going down. In fact, gun murders are nearly at a 100 year low. 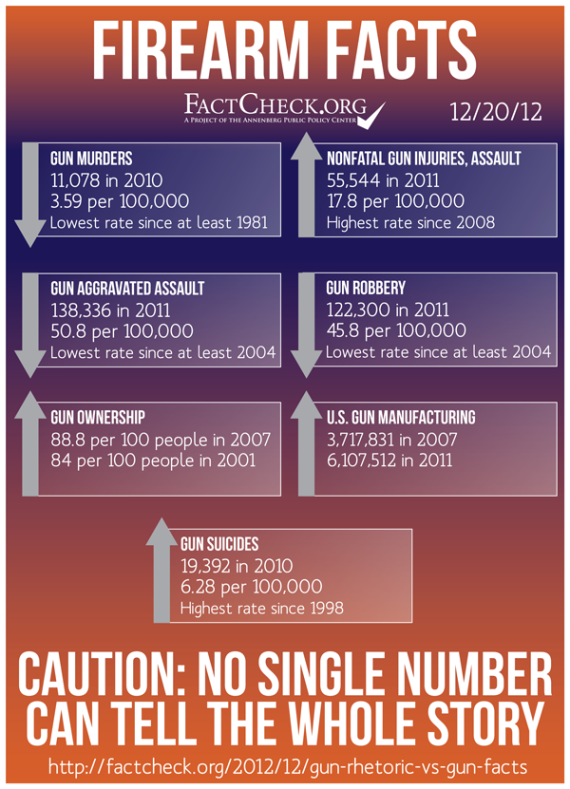 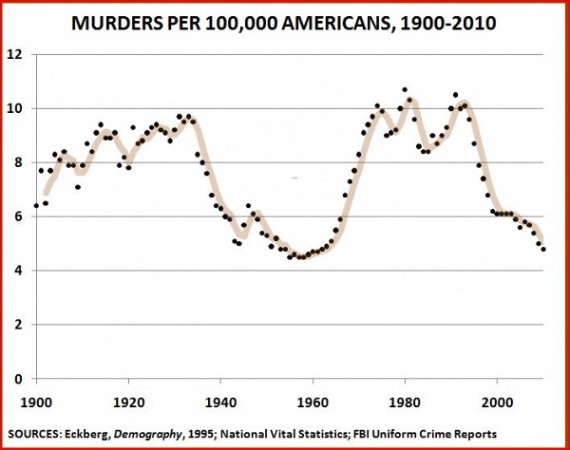 Here is a list of other contributors to the March Synchroblog. Go read all the posts!