You are here: Home / Would Jesus Vote? 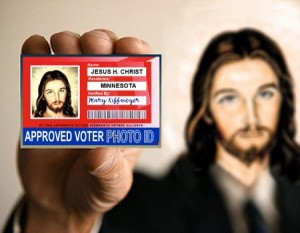 I am not asking, “Who would Jesus vote for?” That question has been beat to death.

Instead, I am asking the more basic question: “Would Jesus even vote?”

I believe He would. But before I explain why, let us look at two of the arguments some Christians give for NOT voting.

I know most of the arguments for why some Christians say that we should not vote (see, for example, this book: Electing Not to Vote

), and I understand their concerns, but I think that most of these arguments are invalid. Here are two examples:

Some say that a vote for “the lesser of two evils” is still a vote for evil.

Well, of course. But unless the candidate is Jesus Christ, you will always be voting for the lesser of two evils.

But note that even when we do not vote, we still vote in other ways. Voting is one way of supporting your chosen candidate, but so is paying taxes, using government services, attending school, and supporting our military. Anything that the government does for you, and which you make use of, is a form of affirming and supporting the governmental system that we have. If you do not like the governmental system that we have, then it is your responsibility to help change it. And even if you are successful in changing it, it will still not be perfect, but will be the “lesser of two evils.”

Voting is a Cop-Out

Some Christians say that rather than try to change the world by voting in a flawed candidate, what Jesus really wants is for us to get out into the world and be the change we want to see.

Such an argument is a straw man. I agree that voting is not enough, but I also doubt that there are any Christians who seriously think that they can change the world for the better simply by casting a ballot. But although voting by itself will not change the world, it does not follow that we should not vote. Voting is one of the many available methods by which we can share our opinion and have some small influence on the world.

There are numerous other reasons some Christians give for not voting, but I think that these two examples reveal my basic framework and perspective on voting.

Why Would Jesus Vote?

Paying taxes, of course, provides way more support to the government than casting a ballot ever will. Since no government is perfect, some of the tax money will always go to support some sort of evil. But Jesus said to pay it anyway.

Furthermore, much like John the Baptist, Jesus was critical of some of King Herod, and I believe that if Jesus has been given the opportunity to vote for a new king, Jesus would have voted for someone who would do a better job of obeying God’s law, upholding biblical values, and protecting the innocent and weak. No candidate will do these things perfectly, but some candidates will definitely do such things better than others.

Voting isn’t going to change the world. Only people can do that. But voting is one of the available means by which we can do the good we know we ought to do.

This post is part of the October Synchroblog, a group of bloggers who write every month about various topics. This month we are all writing about “Faith and Politics.” Below is a list of the other contributors to this topic. Go check them all out and interact with them in the comment sections of their posts.