You are here: Home / Keep Your Greek 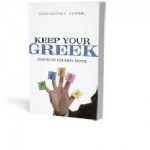 I have taken first year Greek three times. I had to retake the class, not because I failed, but because I forgot everything I learned the first time, and the second time, and almost the third time.

The first time I took first-year Greek was at Moody Bible Institute. Then, when I entered the Master of Divinity Program at Denver Seminary, I barely missed the required 70% on the entrance exam, and so had to retake first year Greek again. A few years later, I decided to do a refresher course on Greek, and took first-year Greek from the Grace Evangelical School of Theology. Later, upon entering Dallas Theological Seminary, I studied first-year Greek for six months on my own so I could pass the entrance exam, which I did by the slimmest possible of margins. I needed a 70%, and got a 69.5%, which the professor graciously rounded up to 70%. 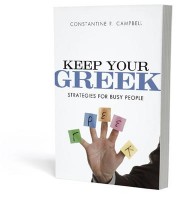 So it was with great excitement that I recently read Keep Your Greek by Constantine Campbell. If I ever want to enter a Ph.D. program, I will have to know Greek, and I do not want to take first-year Greek again.

Keep Your Greek provides ten short chapters on simple tips and daily exercises for maintaining your knowledge of Greek. Ultimately, it comes down to simply using Greek every day, and not relying on crutches like interlinears and Bible Software.

One of the things I found most fascinating about this book, is the connection it made with the author’s blog. Professor Campbell writes at ReadBetterPreachBetter.com. The chapters are based on blog posts he wrote there, and every chapter includes a selection of comments that readers made on the posts. I love this idea, and think that as eBooks gain popularity, we will see more and more of such interaction between books and blogs.

If you want to maintain your Greek, I highly recommend this book. I, for one, will be implementing several of Campbell’s suggestions.