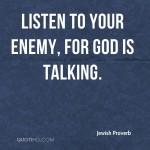 In His Sermon on the Mount, Jesus tells us to love our enemies (Matt 5:44).

Since love for enemies is one of the most unnatural things for a human to do, I believe that enemy-love is one of the clearest and most defining characteristics of a true follower of Jesus. Show me someone who truly understands the heart of God, and I will show you someone who loves his or her enemies.

In recent months, I have discovered that one reason we can love our enemies is because they, above all others, might tell us the truth about our actions and behavior.

Normally, we humans tend to gather around us the people who will affirm our beliefs and behavior, and tell us that everything we think, do, and say is correct and loving and godly.

Of course, it is true what Proverbs 27:6 says, that “Wounds from a friend can be trusted, but an enemy multiples kisses,” but this principle can often be reversed as well, in that friends often overlook our faults and failures because they love us (and maybe because they have the same issues), whereas enemies see through our self-righteous attitudes and hypocritical charades and are more willing to criticize and call us out for our many failures.

Yet when they do this, we tend to ignore what they say, because we believe they are only saying such things from spite and anger. And maybe they are.

But might there also be truth to what they are saying? If so, could it be that the criticism from our enemy is actually the voice of God to us?

I am reminded of the prophet Micaiah in 1 Kings 22. King Ahab and King Jehoshaphat were planning on going to war against Ramoth in Gilead. So they call all the prophets together to tell them whether their war will be successful or not. They have a parade of prophets — 400 of them — who tell the two kings to go to war against Ramoth, “for the Lord will deliver it into the hand of the king” (1 Kings 22:6).

King Jehoshaphat finds this a little strange that all 400 prophets say the same thing (or maybe they were not all prophesying in the name of Yahweh), so he asks if there is not a prophet of Yahweh around to ask what they should do (1 Kings 22:7).

And I love what King Ahab says. He tells King Jehoshaphat, “Oh sure… there’s Micaiah. But I hate him because he never tells me anything good.”

In other words, King Ahab viewed Micaiah as his enemy. He hated Micaiah.

Nevertheless, they had Micaiah come in, and initially, he agreed with the other 400 prophets in telling the two kings to go to war, for they would be victorious. But King Ahab knows Micaiah better than this (and I imagine that Micaiah’s tone of voice of flippant and sarcastic), so King Ahab says, “Stop lying to me. Tell the truth!” (1 Kings 22:16).

And Micaiah does. And he is the only one who prophesied correctly.

The King’s enemy was the only one who prophesied truth to the King.

I think the same thing is happening today within Christianity.

Our enemy is our prophet, but we ignore what he says because he is our enemy.

Who is our prophetic enemy?

Christians love to hate atheists. We feel we do not have to listen to them, because “They don’t believe in God.” They live “secular” lives. They “live in sin.” They “don’t believe the Bible.”

Atheists are prophets for Christianity.

Atheists often point out real problems with Christian theology, Christian practice, and Christian hypocrisy. They often show us how our portrait of a loving God is not very loving, how a God who accepts everybody really doesn’t, and how the values and priorities of many Christian churches and organizations do nothing to help with the real problems in this world.

In my opinion, we Christians fail to listen to the prophetic word from atheists at our own peril.

How about Muslims? Especially Muslim terrorists.

I watch the angry Muslims on TV calling for the death of America and waving signs about “the Great Satan.”

I believe they are flat-out wrong, but at the same time, I have to ask myself, “Why are they saying these things? What have we done to make them think such things about us?”

It is too “easy” of an answer to say that they are just delusional or that they have been lied to about Americans. Certainly they hear lies about us, just as we hear lies about them. But at the same time, we must listen to the complaints they have about American values, American greed, American morality, and American intervention in foreign affairs and recognize that our Muslim “enemies” might be making some good points.

This is especially true when the Christians in American offer full and complete blessings on everything the United States does overseas, including the killing of Muslims and the bombing of cities. Why is it okay for Christian leaders to call for God to bless us in killing our “Muslim enemies” but it is not okay for Muslim leaders to call for Allah to bless them in killing their Christian enemies?

Whatever happened to Jesus instruction for us to “Do unto others as you would have them do unto you”?

How about the LGBTQ community?

When they tell us that we Christians have treated them with hate and contempt, our response is, “No, we haven’t! We’re just warning you about your sin! It is loving to do so. If you don’t repent and change, God will judge you and our nation!”

Their response is, “See? That right there was hurtful. We think our lifestyle is loving, not sinful. Furthermore, it is not right to blame us for all the ill that happens to our country.”

“Well, you’re trying to put Christians out of business!”

“That’s true. Some people are doing that. Just like you Christians have done to us for hundreds of years. Are you saying it’s wrong?”

“Well, it’s wrong when you do it, but not when we do it, because God is on our side. You’re on the side of the devil.”

“That right there was hateful also.”

And the conversation goes on from there. Or more likely it stops.

But I believe that in these sorts of situations, Christians need to stop and listen to the LGBTQ community and what they say about Christian hatred. In this case, they are prophets, bringing to us a revelation from God.

Listening to Our Enemies is One Way to Love Them

In his excellent book, Engaging the Powers (I HIGHLY recommend it!), Walter Wink talks bout the gift of our enemy. He says that our enemies bring us revelations of ourselves that we cannot get from any other source:

These “revelations” (and they are precisely that) need to be treasured, because that is the gift our enemy may be able to bring us: to see aspects of ourselves that we cannot discover any other way than through our enemies. Our friends seldom tell us these things; they are our friends precisely because they are able to overlook or ignore this part of us. The enemy is thus not merely a hurdle to be leaped on the way to God. The enemy can be the way to God (Engaging the Powers, 273).

Do you have someone you consider to be your enemy? Do you know of a group of people that are considered the “enemies” of Christianity? If so, do not seek to harm, discredit, or ignore them. Instead, listen to what they have to say, for their words may in fact be the very voice of God to you and to me.

If you want to hear the voice of God, start by listening to your enemies. 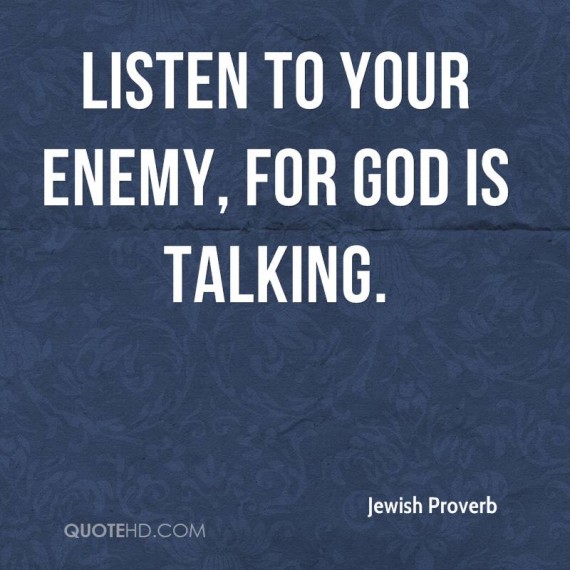