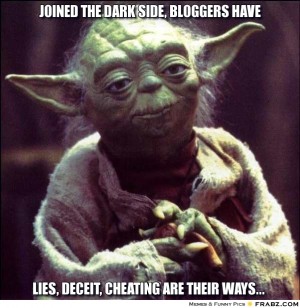 I don’t know why, but I am always surprised when I come across blatant lies in Christian blogs.

You know… blogging dishonesty of this sort: “How I went from 2 readers to 20,000 in three weeks, and how you can too!”

Sure, it happens. But it is not normal, and there are no “secret rules to becoming a full-time A-list blogger.”

But one thing is for sure: Anybody who tells you there are secret tips and tricks to blogging is probably trying to sell you something.  Such bloggers are not being honest with you about blogging so that they can make a quick buck off of you. And sadly, there are many Christian bloggers who prey on other Christian bloggers for this very reason.

I followed one Christian blogger for about three years. He wrote a blog about blogging…. How to set up your blog, and the best blog settings, and how to get readers for your blog, and so on. It was good information, but sometimes, I felt like I was being sold. Then, as I learned more about blogging, and some of the “behind the scenes” tips and tricks of blogging, I noticed he was doing several of these things, but never, ever blogged about them. When I asked him why, he denied that he ever did them, and got very upset when I pointed out to him that it he obviously did do these things.

I do some of these blogging tips and tricks too, and they are not wrong or illegal, but if you have a blog about blogging tips, why not share these tips with other bloggers, and when asked about them, why deny that you do them, when you obviously do? It was strange…

Later, I watched him build a blog from scratch, and boast online about how much traffic it was going to get. It got hardly any traffic for three months. Then he did something to the blog which is… well, “illegal” in the blogging world. It’s not “prison” illegal, but it is an activity that can get you banned from search engines like Google and Bing. He, of course, didn’t announce to anyone what he was doing, but I know enough about blogging to notice what he did. I was shocked that he would do such a thing on his blog, and wondered why he would do it. Sure, it was going to generate him hundreds of thousands of pageviews for a month or two, but then Google would catch on to what he was doing, and would ban him permanently, and the site would then be worthless.

But guess what? As soon as his traffic spiked, he sold lots of expensive ads on his site. He pulled in about $3000 in one month for ads. I thought, “Well, now he is cheating all these advertisers out of their money. They don’t know what all his traffic is fake, but after one month of nobody clicking on their ads, they will figure it out, and he won’t sell any ads next month.”

But after one month, the blogger shut the blog down and called it a “Success!” He then launched a blogging program for $299, so you too can learn to launch a blog which, after only 4 months of operation, pulls in $3000 a month. …Sigh. I now saw his entire plan: 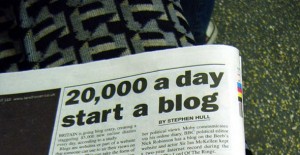 A lot of this, I guess, is intended to cash in on all the new bloggers that start a blog every single day.

Another time I followed a Christian blogger for a while who claimed to have finally found the “secret” to blogging. He also launched a blogging course for aspiring authors and bloggers. It was $297, and promises to show you all the secrets and tricks to blogging.

Now look, I truly think he knows a lot about blogging, and there truly are some tips and ideas which most bloggers overlook. But the truth is that this popular blogger isn’t telling people one super important fact about his blog. One of the things that really launched his blog was that he had a good friend who owns a blog that gets millions of pageviews a month, and this popular blogger spent a few months mentioning and recommending this new blog by his friend.

Then recently I was surfing the blog of another popular blogger, and he claims to have over 300,000 pageviews a month. He says this on a page where he is selling advertisements for his site. He basically says, “If you buy an add, it will get viewed 300,000 times this month.” But I was just looking at a web stats site last week which tracks actual page views of people’s blogs, and I remember noticing that according to that other site, he only gets about 80,000 pageviews a month. Obviously, one of the two numbers is wrong…

I thought that maybe the other site was wrong, but I checked my site, and it was within 5% accuracy to what I actually receive. So it seems to me that he is either padding his numbers to encourage people to place ads on his site, or, more likely, there was a month once where he got 300,000 pageviews, but that month is not “normal.” A normal month is around 80,000 pageviews. Either way, it seems dishonest to me.

All this got me thinking….

I am by no means a super popular blogger or author, but neither am I completely unknown. In the past month, I have had over 60,000 pageviews. It’s not a huge amount, but it’s still a healthy amount. When I first started, I was lucky to get 100 pageviews a month.

And just so you know I’m not lying, here is the Google Analytics report:

So I want to be completely honest and open with you. Do you have questions about blogging? Do you want to know what I do on this blog or how I do it? I am by no means a blogging expert, and I am still learning new things every single day, but I might be able to answer a few questions if you have them.

And no, there are no courses to buy. If I can help a bit, great! No strings attached. No secret agendas. I just want more people to read your blog. 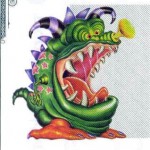 I’ve never done much posting in forums or blogs, so this blog is new territory for me.

And wow, I am amazed at myself. The things I am tempted to write (and maybe occassionally do write) in the posts and comments reveal pride, anger, and an ego that I have never before experienced. Sure, I have some theological disagreements with some of those who make comments, but I don’t think I would get this upset if I were having a face-to-face conversation.

So I apologize. I thought about going back and deleting some of my comments, but then I figured, “Trying to hide my faults is only more pride.” Besides, I do say some good things in some of those comments. (There goes my pride again! Ha ha). So my dirty blog laundry is out for all to see. I have a monster within me, and he sometimes fights to get out.

Another factor of the blog monster I did not consider is the amount of time that blogging can consume. I am too busy to do the things that are already on my plate, let alone taking time to read and write comments.

If those of you who have more experience blogging than I do can give me some me some tips on how to control the blog monster, I would appreciate it. Maybe just more prayer and more time between reading comments and responding to them is all I need.