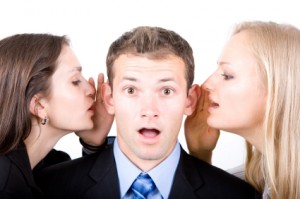 One thing we Christians love to do is gossip. I suppose that due to the Papparazi gossip machine and gossip-heavy magazines like “People” it is only natural Christians fall into this social trend of listening to and spreading rumors about other people. It’s natural, but then, so is all sin.

Ironically, in churches today, we are more prone to condemn “homosexuals,” “abortionists,” and “democrats” than those who gossip. But did you know that the Bible speaks out against the sins of the tongue more than any other sin? I have a sneaking suspicion that the Bible condemns gossip more than all the other sins combined. Someone should do a study on that.

So, if you like to point the finger at others, and send e-mails about how Mr. Leader is moving into heresy (i.e., anything you don’t believe), and make phone calls to put your neighbor on the “prayer chain” (Gasp, Can you believe she got pregnant out of wedlock?!), what you are really doing is committing the number one sin of Scripture.

You know what I say to all of this? Watch the following video to find out.

This poor lady is dealing with a different issue than gossip, but the advice she received can be applied to those of us who gossip: STOP IT.