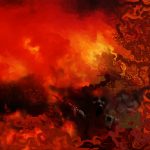 The following study looks at Mark 9:42-50 to see whether are not this text teaches that hell is an everlasting place of suffering and torment for the unbelieving dead.

Mark 9:42-50 is very similar to Matthew 18:6-9, and can be understood in a nearly identical way. So it might be helpful to go back and read that article as well…

However, there is one primary difference between the two passages which is important to consider. The passage in Mark 9 contains the refrain that “their worm does not die, and the fire is not quenched.”

Though many take this passage as a clear reference to eternal suffering and torment in the flames of hell, there are several reasons to doubt such a view.

Are these literal worms? 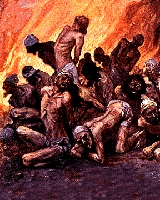 The first reason is that the images of worms and the fire cannot both be taken literally. Indeed, those who see the reference to fire in Mark 9:42-48 as a reference to literal flames in hell do not typically understand the reference to worms in a literal way. Instead, they interpret the worms metaphorically, as a symbol of intense remorse or regret.

Why? Because the word used for worm is skōlex, which is the kind of worm that feeds on dead bodies. This worm would not feed on a living body in hell, and especially not if the body was being burned by flames.

In the literal Valley of Hinnom (Gehenna), which was a graveyard for the dead and dying, worms and maggots would eat the bodies that were not being consumed by flames. Proper hermeneutics requires that either both terms be either literal or symbolic.

But they cannot be literal, for worms cannot “feed” on living beings in hell that are being burned alive for eternity.

Therefore, both terms must be symbolic. But symbolic of what?

In Mark 9:48 (and 9:44, 46 as well), Jesus is quoting from Isaiah 66:24, which is the final verse in the book of Isaiah. These final lines of Isaiah describe the eternal state of the new heavens and new earth, in which all flesh will worship Him forever and ever, “from one New Moon to another, and from one Sabbath to another” (Isaiah 66:22-23). 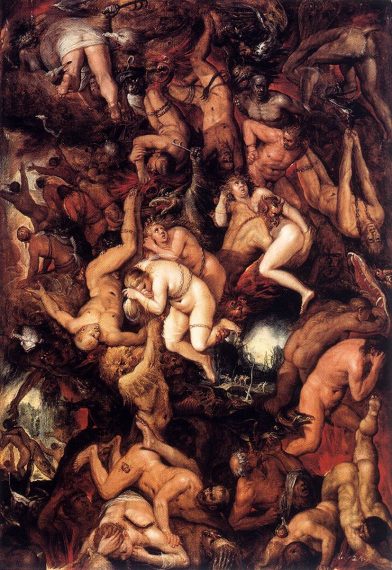 Part of this everlasting worship of God includes the ability to “go forth, and look upon the corpses of the men” who transgressed against God, “for their worm does not die, and their fire is not quenched” (Isa 66:24).

Though some look forward to such an experience with anticipation, I find it impossible to think that as part of eternal bliss with God, people will want to take regular field trips to gaze upon a mass grave full of rotting, burning, maggot-filled corpses.

To the contrary, since we will have glorified bodies, and will be sinless as God is sinless, I doubt that any glorified person in eternity would ever desire such a thing.

So why does Isaiah end his book this way? What did Isaiah have in mind?

And quite often, this destruction and corruption is self-inflicted. God set up the world with rules and guidelines for how to best live and function in this world, but when we live outside these boundaries and guidelines, negative consequences are the result. He does not send the consequences of sin, for they are inherent within sin itself.

God loves us, and does not want to see us hurt by sin, which is why He warns us against it. But when we ignore His warnings and practice sin anyway, the consequences of sin come upon us. This is why Isaiah speaks of “their worm” and “their corruption.” It is theirs and theirs alone. They brought it upon themselves, and they live with it.

But how does this help us understand Isaiah 66:24?

Isaiah is describing the new heavens and the new earth, in which all the peoples of all the nations of the earth dwell (Isaiah 66:18-20). And when he writes that the people of God will be able to gaze upon the corpses of the dead, he is not imagining that there is literally a field of corpses in eternity that we can stare at with dread fascination or morbid satisfaction.

Instead, Isaiah is answering an age-old question about eternity. He writes that in the new heaven and new earth, all flesh will come and worship God (Isaiah 66:22-23).

But the question that people have always asked is how this eternal existence of worshiping God will differ from that of Adam and Eve who were supposed to worship God for eternity as well. In other words, since they were perfect and sinless but still fell into sin, what will keep us from rebelling against God in the new heaven and new earth?

We will have what Adam and Eve did not, namely, the knowledge of good and evil. This knowledge is not something that God intended to withhold from humanity forever, but was instead something He wanted to teach to humanity over time within the reality of an ongoing relationship with Him.

But Adam and Eve “jumped the gun” and tried to take a shortcut before they were ready. In eternity, the thing that will separate us from Adam and Eve, and therefore, allow us to avoid their same mistake, is that we will have knowledge of evil and will understand its devastating and destructive consequences. We will be able to go out and look upon the corpses of men who have transgressed against God, and will be able to see how their words and actions led to nothing but the worms of corruption and the fires of destruction. 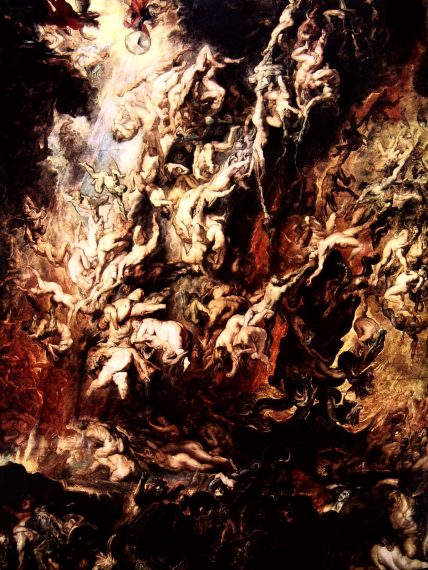 And who are these “corpses” we will look upon? There are all the people of human history, including ourselves. We will be able to view human history, and how we have all lived at various times in the kingdom of hell, which is the realm of death and darkness, the world of worm and fire.

Human history will serve as an everlasting reminder about where a life of rebellion leads. Human history is the everlasting object lesson that provides the knowledge of good and evil to the redeemed.

Besides, since all events in our lives are connected, God cannot wipe some of our memories without wiping them all. But as painful as human history will be to watch and remember, it will carry a much different meaning when viewed through the lens of God’s redeeming grace.

So the group of “corpses” that we will be able to view is the corpse of human history. The field of the dead in Isaiah 66:24 is the field of human history, including all of our mistakes and failures. It is our observation and remembrance of human tragedy and horror that will help us avoid similar mistakes in eternity.

We will have gained the knowledge of good and evil, and by remembering the fires and worms of our past, will be able to judge between right and wrong, good and evil, so that we can worship God in righteousness and holiness forever.

This will enable us to worship God in eternity by learning from our past mistakes and seeing how God has redeemed these mistakes to bring glory and honor to Himself for all eternity.

It is this understanding of Isaiah 66:24 that Jesus appears to have in mind.

We see this because of His reference to fire and salt in Mark 9:49-50.

Jesus says that “everyone will be seasoned with fire.”

If Jesus is thinking of the eternal fires of everlasting torment in hell, then He would be saying that everyone is going to hell. Clearly He is not saying this, and so therefore, some other meaning must be sought.

His reference to salt helps clarify the picture. In the ancient world, salt was not only used as seasoning, but also as a preservative for meat. Since there was no refrigeration, salt kept meat from decaying, and kept worms from eating the meat. 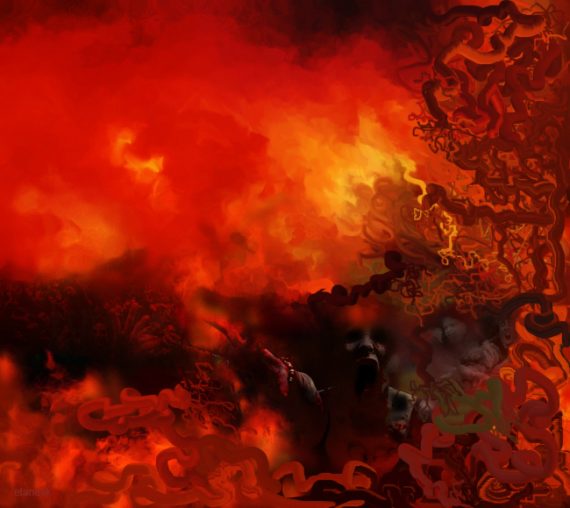 Since the fires of destruction often come upon humans as destructive wars (that often involve fire), then being seasoned with salt for the sake of peace is one of the primary ways to avert human violence and the wars that come from it.

This imagery of fire and salt is also mentioned in the context of sacrifice.

This brings to mind not only the sacrifices of the Mosaic Law, but also the invitations in the New Testament for followers of Jesus to offer ourselves as living sacrifices to God (cf. Rom 12:1-2). Jesus has done away with bloody sacrifices, and now calls us to follow Him through a life of self-sacrifice for others.

If we do not fire and salt ourselves in this way, our life’s work will be burned away forever and will be eaten and destroyed by the corrupting worm.

William Lane presents the truth of Mark 9:43-49 this way:

The thought of the sacrifice of an offending member of the body (verses 43-47) is here carried a step further: every disciple is to be a sacrifice for God (cf. Rom 12:1). In the OT the Temple sacrifices had to be accompanied by salt (Lev 2:13; Ezek 43:24; cf. Exod 30:35). The salt-sacrifice metaphor is appropriate to a situation of suffering and trial in which the principle of sacrifice cultivated with respect to the individual members of the body is now severely tested. The disciples must be seasoned with salt, like the sacrifice. This will take place through fiery trials (cf. 1 Pet 1:7; 4:12) (Lane, NICNT: Mark, 349).

So the worm and fire of Mark 9:43-49 is not referring to the punishment or torture of the unregenerate dead in the afterlife, but to the self-sacrifice, loving discipline of God, and even fiery trials of persecution that come upon disciples of Jesus during this life as a way of purifying their lives and preparing them for future ministry and effectiveness in this life.

As with Matthew 18:8-9, Jesus is encouraging His disciples to take steps of self-sacrifice now, in this life, and to keep their life free from pollution, corruption, and moral decay.