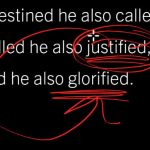 Paul was an outspoken proponent of God’s grace, and confronted legalism and works-based righteousness everywhere he went and with every letter he wrote. Paul’s magnum opus on the gospel, his letter to the Romans, has numerous clear statements about eternal security. One of these is Romans 8:29-39.

Almost every single verse in Romans 8:29-39 has something to say about our security as believers in Jesus, which can be seen in three parts. The first part, found in Romans 8:29-30, contains the eternal security chain.

Justification is in the middle of this chain, which means that those who believe in Jesus for eternal life, that is, those who are justified by faith alone in Jesus Christ alone, are also those who have been foreknown by God from all eternity and who will also be glorified by God in the future.

What this means is that there is not one single person who can be justified by faith alone who will then fail to be glorified. All who are justified will arrive at glorification. In other words, once a person is justified, they cannot lose their justification.

While I do not like the phrase “once saved, always saved,” I am perfectly happy to join Paul in proclaiming “once justified, always justified.”

Note as well that the items which Paul mentions in this eternal security chain are all God’s parts in eternal life. Human faith is not mentioned anywhere, nor is the process of sanctification. Paul is very aware of both ideas as he has written extensively about both earlier in this letter (cf. Romans 4–7). So by writing this chain as he has, Paul is teaching that once a person is justified by faith alone in Jesus, there is nothing they can do to stop the rest of the chain from occurring.

Even if a person stops believing or fails to make much progress in sanctification, such failures do not stop God from bringing the person to glorification.

While faith in Jesus is the only “on ramp” to this eternal security chain, there are no “off ramps.”

Since the entire chain is up to God, there is nothing that can break it. 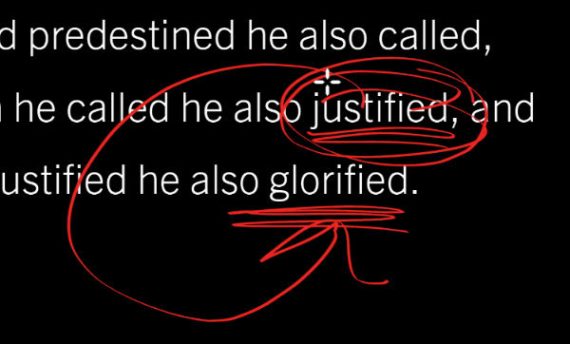 Nevertheless, Paul knows that there are always some who cannot accept or understand such amazing grace. There are always grace critics. Paul goes on in Romans 8:31-34 to silence the critics.

Critics of grace always like to ask questions like, “But can’t Satan accuse us of sin before God? What about that really bad sin of murder and adultery? God can’t just cover those by grace, can He? Won’t Jesus be offended by certain sins I commit and remove Himself from me, so that God no longer sees Christ when He looks at me?”

These are all good questions, but to answer them, Paul has several questions of his own.

His first question is, “If God is for us, who can be against us?”

The next question of Paul is even more pointed. He says, “He who did not spare His own Son, but delivered Him up for us all, how shall He not with Him also freely give us all things?”

Paul says that since God freely delivered up His Son to die for us, won’t He also give us everything else freely too? Of course He will! This is the same truth Paul already mentioned back in Romans 5:8-10. Which is harder? To love and forgive a wicked, rebellious, wayward, wretched sinner, or to continue forgiving somebody who has been declared righteous by God and who has been identified with Jesus Christ in His death and resurrection? 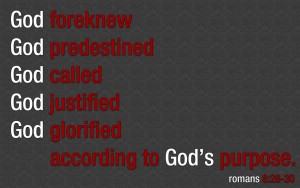 Neither is too difficult for God, but the point is that if God justifies us freely by His grace while we were yet sinners, it is no problem whatsoever for God, once we have been justified, to then glorify us and freely give us everything else we need for life and godliness (2 Pet 1:3).

This is the next question Paul asks and answers: “Who shall bring a charge against God’s elect? It is God who justifies.”

In other words, he is saying, “You’ve sinned really bad? You’ve sinned repeatedly? Who is going to charge you? The only person in the entire universe who could possibly bring a charge against you is God Himself, and He’s not going to do that, because He already justified you.”

All sin is ultimately against God, and therefore He is the only one who can bring charges against us. But when we sin, God says, “Yep, I saw that one from before the foundation of the world, and I already forgave it. I will not bring charges against it.”  And if God doesn’t charge you for the sin you commit against Him, nobody will.

What about Jesus though? He is God too, and He’s the one who went to the cross for our sin. Won’t He get tired of us sinning, and eventually just throw up His hands in disgust and give up on us?

Paul answers this too in Romans 8:34: “Who is he who condemns? It is Christ who died, and furthermore is also risen, who is even at the right hand of God, who also makes intercession for us.” Many people read this text completely backwards. They read the question, “Who is he who condemns?” and think that the following words, “It is Christ” provide the answer to the question. When read this way, Romans 8:34 is thought to be saying that it is Jesus Christ who condemns us.

Jesus is not our accuser but our advocate. Jesus is on our side.

So if Jesus, the only person who could condemn us, is actually defending us, then there is no accusation against us which can stand. With Jesus as our intercessor, there is no way we can ever be condemned of anything before God. If Jesus won’t condemn us, nobody can.

In light of all this, we have nothing to worry about. This is how Paul closes out his thoughts on the subject of eternal security.

Quite the contrary, rather than being defeated and overcome and condemned by such things, “we are more than conquerors through Him who loved us.” These things cannot defeat us, because in Jesus we have defeated them.

The reason Paul mentions this specific list of items is because he knows that when these things happen to us, we believe it is because God has rejected us, is punishing us, or has stopped loving us. When we go through tribulation, distress, persecution, famine, nakedness, peril, or sword, our natural instinct is to believe that such things are evidence that God has abandoned us.

But Paul wants his readers (and us) to know that nothing could be further from the truth. Nothing can separate us from the love of Christ. Bad things happen to us because we live in a sinful world; not because God has withdrawn His love from us.

Romans 89:38-39 is the conclusion of the matter, and are some of the most beautiful verses in the entire Bible. Paul writes “that neither death nor life, nor angels nor principalities nor powers, nor things present nor things to come, nor height nor depth, nor any other created thing, shall be able to separate us from the love of God which is in Christ Jesus our Lord.” 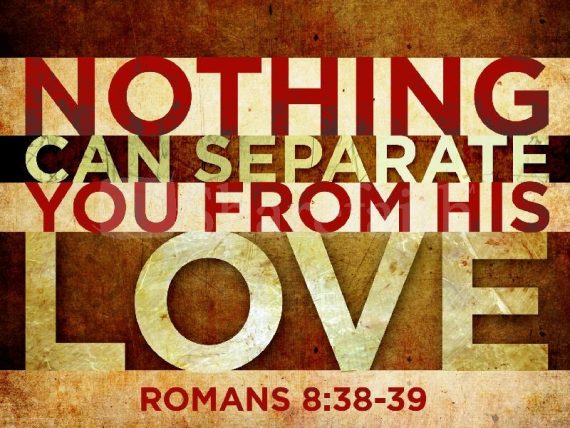 This description also includes ourselves.

In the end, Paul’s message in the first half of his letter to the Romans points to one single truth: Because God has done everything necessary as far as our eternal life is concerned, there is absolutely nothing we (or anyone or anything else) can do to lose our eternal life once we have it.

Those who are justified by faith in Jesus are eternally righteous in God and 100% of them will be glorified.