You are here: Home / Did David’s Mother Commit Adultery? 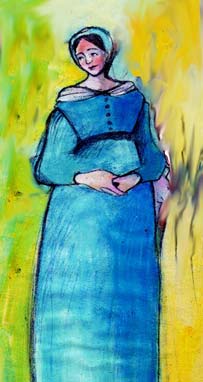 As I was researching a text for my book on Calvinism, I stumbled across the Jewish tradition that David was born as the result of an alleged adulterous relationship. Have you ever heard of this idea that David’s mother committed adultery? I hadn’t either. But I researched it, and checked with several of my Rabbi friends, all of whom said that this is the traditional Jewish history regarding David and David’s mother.

I am sharing it with you because it has many surprising parallels to Jesus.

The tradition is based on Psalm 69

David Was Despised by His Family (Psalm 69)

If you open up a Christian commentary on the Psalms and read the introduction to Psalm 69, you will see that most Christians cannot place the events of Psalm 69 in the life of David very well. They will say that there are numerous instances in the life of David during which he could have written this Psalm. They will usually go on to point out, however, that the Psalm contains many prophecies about Jesus Christ, His rejection by His family, and even how He was given vinegar to drink on the cross.

Curiously, I could find no Christian commentary that mentioned the traditional Jewish interpretation of Psalm 69, that it was written during David’s youth. They say that the Psalm is full of pain, rejection, and hardship because David was an outcast among his family.

They say that David grew up in a family in which he was despised, rejected, shunned, and outcast. He was treated with scorn and derision (Psalm 69:7-8). The community followed the example of the family, and assumed that David was full of sin and guilt (Psalm 69:11-12). If something turned up missing, they believed he stole it, and forced him to replace it (Psalm 69:4). He was often the object of jokes and pranks, filling his plate with gall and his cup with vinegar (Psalm 69:20-21).

If this is true, it somewhat explains why Jesse did not have David present when the Prophet Samuel came to choose a man to be God’s anointed king (1 Samuel 16:1-13), and also why his oldest brother Eliab reacted the way he did when David later showed up at the Israelite camp when they were being mocked by Goliath (1 Samuel 17:28).

But why would David’s family reject him?

The traditional Jewish answer to why David’s family rejected him is that they all thought that David’s mother had committed adultery and borne him out of wedlock. They thought he was a bastard (in fact, the word “stranger” in Psalm 69:8 has the same Hebrew root as muzar, meaning “bastard”). The traditional Jewish story is stated briefly below.

David’s father, Jesse, was the son of Obed, who was the son of Boaz, who married Ruth, the Moabite woman. The Jewish traditional law explicitly forbade Hebrew women from marrying Moabite men because of how the Moabites treated the Israelites when they were wandering in the desert after fleeing Egypt. But the law was unclear about whether or not a Hebrew man could marry a Moabite woman. Boaz believed that the law allowed such a marriage, which is why he married Ruth.

However, according to Jewish tradition, Boaz died on the night that he and Ruth were married (Midrash, Zuta, Ruth 4). Many believed that his death proved that God had condemned Boaz’ marriage to Ruth, and had punished him accordingly.

However, even though Boaz and Ruth had only been intimate for that one night, she conceived and gave birth to Obed.

Obed was then viewed as illegitimately born, as was his own son, Jesse. Nevertheless, both of these men labored hard in learning the Torah and loving God and so the conduct of their lives helped convince the surrounding communities that though Boaz had sinned, they themselves were accepted by God as part of the covenant community. Jesse married a Jewish girl named Nizbeth (Babylonian Talmud, Baba Batra 91a).

After Jesse had been married for many years, had fathered seven sons with Nizbeth, and had gained honor as a righteous man and spiritual leader in the community, doubts began to fill his mind about whether or not his line and seed were permanently polluted by his Moabite blood. It was at this point that he resolved to cease all sexual relations with Nizbeth. He did this out of love for her, because she, as a pure Israelite, would be sinning to be married to someone who was of impure Moabite ancestry.

Furthermore, Jesse began to doubt the legitimacy of his seven sons. If he was impure, then his children were illegitimate and impure as well.

So Jesse, wanting a legitimate heir, came up with a plan to have a son in the same way that his forefather Abraham had done: through relations with his wife’s Canaanite maidservant. Whether Jesse was viewed by God as a true Israelite or just as a Moabite convert to Judaism, the law allowed him to marry a female convert to Judaism. If he obtained a son from this union, this son would be recognized by all as a legitimate heir, thus securing Jesse’s family line.

When the Canaanite woman was told of this plan, she did not want to participate, for she loved Nizbeth, and had seen the pain that she had gone through by being separated from her husband for so many years. So she told Nizbeth about Jesse’s plan, and the two of them decided to do what Laban had done so many years earlier with Leah and Rachel. So on the night that Jesse was to have relations with the Canaanite maidservant, she switched places with her Nizbeth. On that night, Nizbeth conceived, and Jesse remained ignorant of what had taken place. (My wife says that for this to work, Jesse must have been drunk. Same goes for Jacob.)

But several months later, Nizbeth began to show that she was with child, and her seven sons, as well as her husband, all believed that she had committed adultery. The sons wanted to kill their adulterous mother by stoning (as the law called for) and her illegitimate baby with her, but out of love for his wife, Jesse intervened. Nizbeth did not reveal to her husband that the child was his, for she did not want to embarrass him by revealing the truth of what had happened. Instead, she chose to bear the shame of their son, much as her ancestress Tamar was prepared to be burned rather than bring public shame upon Judah, her father-in-law and the father of her child (Genesis 38:24-25). 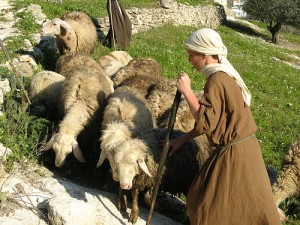 As a result, David grew up in a family in which he was despised, rejected, shunned, and outcast as described in Psalm 69. He was treated with scorn and derision. The community followed the example of the family, and assumed that David was full of sin and guilt. If something turned up missing, they believed he stole it, and forced him to replace it. He was often the object of jokes and pranks, filling his plate with gall and his cup with vinegar.

It was said that all the great qualities of Boaz were to be found in Jesse and his seven sons, while all the despicable traits of Ruth the Moabite were concentrated in David. The tradition is that this is also why David’s family forced David to be the shepherd in the fields by himself … they were hoping a bear or lion might kill him.

This may also help explain why later in life, when David was fleeing from a murderous Saul, David asked the King of Moab to harbor his mother and father (1 Samuel 22:3-4, according to tradition, one of his brothers was also protected there). Of course, a couple of years later when David becomes king of Israel, he slaughters two-thirds of the Moabite army. Why? Well again, according to Jewish tradition, this was because after David left his three family members under the protection of the King of Moab, the King killed David’s father and mother, but left his brother alive (The Pulpit Commentary, 2 Samuel 8:2). So when David becomes king, he retaliates by killing two-thirds of all the soldiers of Moab.

Finally, this may also explain why David, when he was confessing his own adulterous relationship with Bathsheba, he says “In sin my mother conceived me…” (Psalm 51:5). We will look more at this verse tomorrow.

Of final interest (at least to Christians) about the birth of David is the numerous parallels it has the birth of Jesus. He too, was viewed as one born of sin (John 8:41). Mary, his mother, conceived while she was betrothed to Joseph. And though people urged Joseph to stone her, he decided to marry her instead, thus taking her shame upon himself. But undoubtedly, there were always whispers, raised eyebrows, and sideways glances whenever Jesus and Mary walked by. Like Nizbeth protecting and defending David, Mary would have been the number one protector and defender of Jesus. Also, Jesus was not really accepted by his family until much later in life.

I am not saying that this is the way it happened, but at the same time, who’s to say it didn’t? Anyway, let me know what you think in the comments below!