You are here: Home / The Evolution of Communion

The Lord’s Supper was not originally the way it is practiced today. It evolved.

Here is a brief summary on how this happened.

After the church became the official religion of the Roman Empire, the church leaders had time to develop approved theology and doctrine. Among the things that were debated were the ways that the grace of God was distributed to believers. They came up with numerous ways, all of which required the involvement of the priestly class. Very frequently, the priests said special prayers or required people to say special words when undergoing these sacred rituals, so that over time, people began to think that there was actual power in these rituals, so that the way they were done did not matter as much as simply doing them.

This is how, for example, baptism by sprinkling began. It was thought that the significance of baptism was not in the symbol of going under the water and then rising back up as though from the dead, but in the power of the water itself after it had been blessed by a priest. Therefore, if the power was in the sacred water itself, the amount of water used did not matter. Why use a whole container of water when a few drops would suffice? Why require people to get into a river, when the priest could simply sprinkle a few drops of water on someone’s head? So you see, once the ritual was boiled down to the spiritual power within the ritual, the symbolic nature of the ritual disappeared, and the force was in the ritual itself, whether done in large quantities or little.

The same thing happened with the Lord’s Supper. 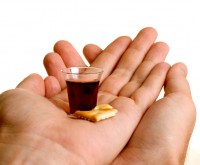 Originally, as will be seen in future posts, the Lord’s Supper was an actual meal. It was an actual supper. But as Catholic theology progressed, it was decided that the power of the meal was not in what happened during the meal, or in the gathering of people for the meal, or really in the food itself, but in the bread and the wine after it had been blessed by the priest. Therefore, why require people to eat a whole meal, when any amount would do, no matter how small? The significance of the bread and wine was not in the elements themselves, but in the power of the spiritual presence that came with it. So just as baptism could be done with a few drops of water, so also the Lord’s Supper could be observed with a small bit of bread and a few drops of wine.

During the Protestant Reformation, as certain church leaders began to break away from the Catholic church, some of them dropped the idea about the mystical presence of Jesus within the bread and wine, but kept the practice the same. The Lord’s Supper continued to involve a tiny bit of bread and a few drops of wine. It was in the late 19th century that churches began to switch to grape juice, and this became the standard practice during Prohibition in the early 20th century.

That is pretty much where are today. The tradition of using a tiny bit of bread and wine (or juice) has continued to be practiced, even though it does not even come close to what was practiced by Jesus and His apostles on the night He was betrayed, and reflects instead some sort of magical ceremony where some people believe that God is giving them special grace and power through the ritual elements of bread and wine. Those who do not believe this, still put great emphasis and significance upon the ritual, because they seem to think that this is what the Scripture teaches (even though it doesn’t), and that this is the way it has always been done (even though it hasn’t).

We will begin to look at some of the key Scriptures on the Lord’s Supper tomorrow.