You are here: Home / The Flood of Genesis 6-8 in Context

In the flood of Genesis 6-8, did God really send water to kill every living thing on earth? We have been considering the issue of the violence of the flood for several posts now, and will continue to do so for several more. This post briefly introduces the context of the flood in Genesis 6-8.

The Context of Genesis 6-8

Though this is the most common view of these chapters, there are numerous clues left by the text itself, by the surrounding context, and by other passages in Scripture which indicate that something else is going on in the flood account. The truths of Genesis 6-8 (and especially 6:7, 13, 17; 7:23) can be understood differently when we grasp the Scriptural and cultural contexts in which these texts were written, what other Old Testament authors had to say about the flood, and also what the Apostle Peter writes about it in his second letter. This section will look at the surrounding context of Genesis 6-8, and subsequent sections will consider other biblical passages that deal with the flood. 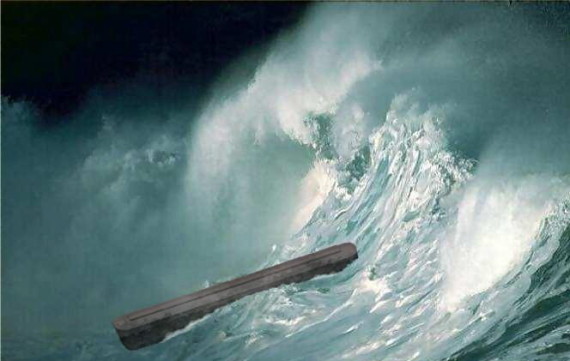 The Creation of the World from Water

We first need to ask questions about the water in Genesis 1:2. Where did these waters come from? Were they part of what was created in Genesis 1:1, or is 1:1 more of a summary/title for chapter 1? If the latter (as many Bible scholars believe), then the text doesn’t really tell us where the waters came from, only that they existed. And either way, how should the waters be understood? Are they referring to literal liquid water or is the water a literary symbol for something else?

We also need to ask what it means for the earth to be “without form and void” (Heb., tohu wa bohu). What does this phrase mean, especially in light of the statements in passages like Isaiah 34:11, 45:18, and Jeremiah 4:23 say that God did not create the world without form and void, but that it would return to this state? If Isaiah and Jeremiah says that God did not create the world formless, but Genesis 1 says it was formless, then how are we to understand both texts? Is there a contradiction in Scripture, or is something else going on in one (or both) of these passages?

The Nephilim of Genesis 6

Then there is the great debate surrounding the sons of god and daughters of men and their offspring, the Nephilim, in Genesis 6:1-4.One explanation for the flood is that the sons of God (as sinister angelic beings) had so polluted the human line that God had to make a clean start. It is thought that one of the purposes of the sons of God in having children with the daughters of men was to pollute the human race so that the Seed of Eve could not come and crush the serpent’s head (Gen 3:15). Therefore, when the text says that Noah was “perfect in his generations” (Gen 6:9), this is not a reference to the morality of Noah, but to the fact that Noah’s bloodline had not been polluted by the sons of God.

Since this account leads immediately into the statement by God that He is saw the wickedness of mankind of the earth and so resolved to destroy everything that breathes, (Genesis 6:5-7), it is essential to have some sort of framework for what is going on in this opening segment of chapter 6 as an explanation for why the flood occurs.

There are numerous other contextual issues from Scripture that could be considered, but these are three of the central background problems for dealing with the events of the flood. But we must also consider some of the cultural background issues, especially those dealing with the ancient worldview of Mesopotamia and Egypt. The imagery that is used in Genesis 1–2 and in Genesis 6-8 finds many parallels in Mesopotamian and Egyptian cosmology, and if we don’t understand these cultural contexts, we will almost certainly not understand these opening chapters of Genesis either.

In future posts we will look at several of these contextual issues. Until then, how do you understand the flood account in light of the creation account in Genesis 1, and in light of what happens between the sons of God and the daughters of men in the first part of Genesis 6?