You are here: Home / z / A Brief History of John Calvin

John Calvin was born in France in 1509 and was raised as a Roman Catholic. His father initially intended John to enter the priesthood, but realized later in life that there was more money to be made in law, and so in 1525, sent John to become a lawyer.

It was during this time that the ripple effects of Martin Luther’s 95 Theses (published in 1517) were beginning to be seen throughout all of Europe. In 1533 John Calvin experienced his conversion, and later that year, one of John Calvin’s close friends, Nicolas Cop, publicly sided with the Reformers in calling for changes in the Roman Catholic Church. As a result, Cop was condemned by the Catholic Church as a heretic, and was forced to flee for his life. Calvin was also implicated in the condemnation and was also forced to go into hiding.

In 1536, Calvin published his first edition of the Institutes of the Christian Religion, which was initially intended to be a short explanation and defense of the teachings and ideas of the Reformers. The book went through numerous subsequent expansions over the course of John Calvin’s life.

A short time later, during one of his travels, John Calvin traveled to Geneva, and a man there named William Farel convinced John to stay and help reform the church in Geneva. He agreed, and in 1537 he was selected to be a pastor of the church.

However, by the end of the year, the church council forced Calvin to resign his position and leave Geneva because he wanted to force church members to sign his doctrinal statement and articles of church organization (which few people wanted to do), and because he refused to serve communion with unleavened bread on Easter Sunday.

Calvin traveled to Strasbourg, which was a city of refuge for Reformed people, and over the course of the next three years, preached and taught in three different churches. He also worked on an updated version of the Institutes, and published his Commentary on Romans. 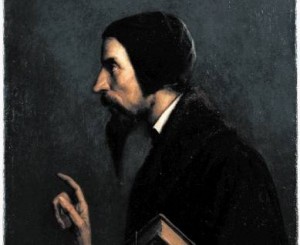 During the time, the church in Geneva dwindled in size, and was facing pressure by the Roman Catholic Church to return to Catholicism. By way of response, the Genevan church called upon Calvin to write a letter in their defense, which he gladly did. They were so pleased with his letter, they asked him to return to Geneva and take up the pastoral position once again.

In 1541, Calvin returned to Geneva under the condition that the church accept and adopt his proposed reforms. They agreed. Calvin ministered in Geneva for the rest of his life, until he died in 1564. The first few years of his ministry were busy and productive. He preached an average of five sermons a week, and wrote numerous books, tracts, as a well as a set of commentaries on almost every book of the Bible.

However, his ministry in Geneva was not without opposition.

Not all agreed with Calvin’s teaching and theology, and many accused Calvin of teaching false doctrine. From 1546 to 1553, Calvin’s power and influence steadily waned. There were frequent attempts by both sides of the debate to undermine, arrest, and even kill members of the other party.

As one example, a man named Jacques Gruet was arrested and, under torture, confessed to writing an anonymous letter in opposition to the church leaders. Gruet was beheaded in July of 1547.

Eventually, the opposition to Calvin became so fierce, that in July of 1553, Calvin offered to resign his position a second time. His request was refused, because those who opposed him knew that an uprising and church split would likely occur if they accepted Calvin’s resignation.

One month later, in August of 1553, all of Calvin’s fortunes changed when a man by the name of Michael Servetus arrived in Geneva. Servetus also was a Protestant Reformer, but had been condemned as a heretic by both Catholic and Protestant church leaders for his writings against the Trinity and infant baptism.

Though Calvin and Servetus had debated these issues by letter for many years, they had never met in person, yet when Servetus stopped in Geneva on his way to Italy, he was recognized and arrested. A trial ensued, in which Servetus was once again condemned as a heretic, and on October 27, 1553, was burned at the stake on top of a pile of his own books.

John Calvin – The Defender of Christianity

As a result of his involvement in the arrest, trial, and execution of Servetus, John Calvin was acclaimed across all of Europe as a defender of Christianity. 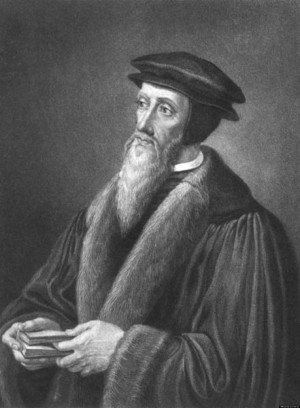 Over the next two years, his power and fame grew as never before, and in 1555, all who had previously opposed John Calvin either fled Geneva or were rounded up and executed.

From 1555 until his death in 1564, Calvin’s position, power, and reputation went almost completely uncontested. He did experience some controversy with Martin Luther over the issue of consubstantiation, but even this controversy with Martin Luther—the “father” of the Reformation itself—only solidified Calvin’s position of prominence in the minds of many.

During these final years, he continued to write, preach, and teach, and he also founded several schools, including Calvin College (Collège Calvin) in Geneva, Switzerland in 1559.

After his death, Theodore Beza took over Calvin’s position in Geneva and helped carry on his work and ideas.

This is obviously a very short and summarized history of John Calvin’s life. For those of you who have studied John Calvin, do you have anything to add? For those who didn’t know much about Calvin, what are your initial impressions from this brief account? Let us know in the comments below.