You are here: Home / I Am an Idol-Worshiping Pagan Heretic 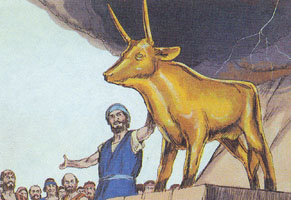 So someone left a one-star review of Christmas Redemption on Amazon.

My books certainly seem to attract negative reviews. Someone left a one-star review of Finding Church before they had even read the book! She claims she doesn’t need to read it, because the title tells her everything she needed to know. So her one-star review was because she didn’t like the title… sigh.

Anyway, regarding the one-star review of Christmas Redemption, the man said that with this book, I am leading people into idol worship. He equated me with Aaron building a Golden Calf for the Israelites and telling them that it was their God. He says he is writing a full-length rebuttal, but wanted to put a short warning up on Amazon.

I appreciate his honesty, and look forward to reading his rebuttal, if he sends me a copy.

But here is the thing, Aaron and the Israelites did the exact opposite of what I am encouraging Christians to do. God led the Israelites out of Egypt, and delivered them through the Red Sea, and then at the foot of Mount Sinai, Aaron built a golden calf and called it Yahweh, and said that this was the god that rescued and delivered them from Egypt. When Moses found out, he became enraged, destroyed the calf, and called people back to giving glory to God alone for what He had done.

I am not calling people to take the things of God and then construct idols for our worship and call them “God.” That is what Aaron did, but not what I am doing. No, I am doing the exact opposite. I encourage people to take the things of the world, which used to give credit and glory to pagan idols, and calling on people to give the credit and glory to Whom it really belongs, our Lord and Savior Jesus Christ! It is He who is the light of the world, the giver of all good things, and the true Spirit of generosity and grace.

This is what Christianity has done with most of our history and traditions (church buildings, Easter, paid clergy, etc), and what Moses himself did with much of his writing. Many Christians do not realize it, but Genesis 1-2 is mostly borrowed from Egyptian Creation Myths. So also, the “contract” between God and the Israelites in Deuteronomy is based off a Mesopotamian Suzerain-Vassal treaty, which often used pagan deities to guarantee the terms of the treaties. But Moses, who was trained in the Egyptian courts, took these documents, and changed the names and a few of the details so that stories and treaties which used to give glory to pagan gods, now directed people’s worship, honor, and glory to the One True God, the God of Abraham, Isaac, and Jacob. Even most (maybe all) of the Jewish holidays and festivals were borrowed in one way or another from Egyptian and Canaanite festivals at the time. 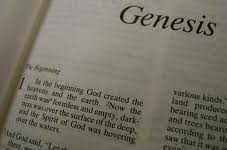 This does not mean that Genesis 1-2 is myth, or that God didn’t really say the things He said in Deuteronomy, or that the Jewish feasts have no significance or meaning.

Quite to the contrary! If anything, God told Moses to write these things, telling him that He was redeeming this stories and treaties and festivals to Himself. Though the Egyptian Creation Myths gave glory to pagan deities, Genesis 1-2 now gives glory to God alone. The redemption of the Suzerain-Vassal treaty shows how God behaves fairly with His people. The redemption of the festivals shows that God can redeem holidays and rituals for His own honor and glory, and that even as His people, He still wants us to enjoy life with parties, laughter, and celebrations. God is not a kill-joy; He’s a joy amplifier.

We could go on and on like through most of the Old Testament and find numerous other examples of writers taking pagan ideas, stories, practices, and customs, and reworking them so that they no longer give glory to idols, but bring honor and worship to the God of Israel. This is what redemption is all about! 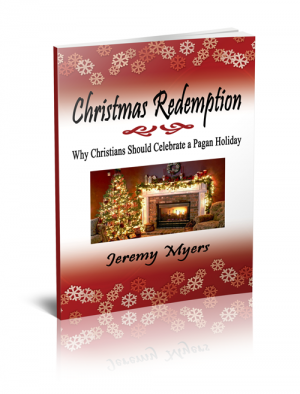 And this is what I tried to show in Christmas Redemption. There are many pagan practices which used to give glory to pagan deities, but the church can take some of these practices and symbols and point them to the One who really deserves the glory and honor of bringing light into this dark world – not Saturn, but Jesus Christ. I am doing the exact opposite of what Aaron did. He took the things of God and gave credit to a golden calf. I am taking the things of Saturn and giving credit to Whom they really belong – Jesus Christ.

Anyway, I am not really trying to convince this person who left the one-star review. There are many Christians who will always see things differently. You don’t need to go argue with him. That is not why I am posting this. Of course, maybe you want to post a one-star review of your own… Ha!

As for me, I am convinced that redemption is a key theme in the Bible, and if we don’t really understand redemption, we will not understand Scripture, God, Jesus Christ, ourselves, or our task in this world as followers of Jesus Christ.