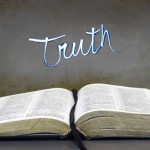 Thinking about the nature of truth helps us understand how the Bible is (and is not) true.

And don’t get nervous … I believe all the Bible is true … but you need to read on to discover what I mean by this.

There are different types of truth.

There is logical truth, scientific truth, historical truth, relational truth, poetic truth, and yes, even universal truth. There is a lot of overlap between some of these types of truth, but there are also some areas that might be true in one category, but not true in another. 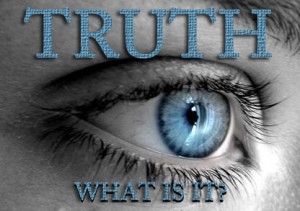 Then there are statements which are true for some and not true for others. The statement, “Halloween is a day on which children get candy,” is true for children who go Trick-or-Treating on Halloween, but is not true for those who don’t.

Many historical truth claims are true when they are made, but are not true later. For example, “King George is the King of England” was true when he was king, but is no longer true today.

Then there are experiential truths and truths from a certain perspective. Consider these two statements: “The sun rises in the east. The sun rises in the west.” Which statement is true? Everybody would agree that first statement is true. Yet from a scientific perspective, the sun does not rise in the east. This is an illusion based on our experience of seeing the sun rise up out of the Eastern horizon. Scientifically, however, the sun is stationary and the earth rotates around the sun.

Of course, even that is not a scientifically true statement, since in reality, the sun is not even close to stationary. The sun it is moving through the Milky Way galaxy at a speed of 450,000 mph. And when you consider that the Milky Way galaxy is moving toward the Andromeda galaxy at a speed of about 150,000 mph, and the earth is moving around the sun at a speed of about 70,000 mph, what this means is that when you were a child and your mother told you to “Sit still” you were still moving at a rate of about 670,000 mph.

So as you sit there reading this text, are you sitting still or are you moving?

This dilemma about truth becomes even more convoluted when we begin to discuss history, poetry, and literature.

The statement, “I ate porridge for breakfast this morning,” is a true statement (Relative, of course, to how I am using the words “porridge” and “morning.”) But if I say, “The porridge was good,” we now have a truth dilemma. What do I mean by “good”? I could mean that it tasted good, or that it was morally good, or that it was not rotten, or maybe that it manufactured and sold by a company named “Good.”

Then there is the language of poetry. Take this statement: “The color of love is red?” Is that true? Yes, it is true. But not from a scientific, or logical, or mathematical, or historical perspective. Love has no color. And in fact, what exactly is “red”? For that matter, what is “love”? (Baby, don’t hurt me, don’t hurt me, no more!)

Or take fiction and literature as an example. Here is a True or False question for you to answer: Aesop’s Fables are true.

Well, of course they’re false! In fact, the word “fable” means “myth” or fictional story, which by definition, means they are not true.

And yet Aesop’s Fables contains some of the greatest truths in literature. Truths about greed, teamwork, hard work, and self-discipline. So in this sense, Aesop’s Fables are amazingly true.

Enough with all this though. I hope you see that the truthfulness of a statement depends almost entirely on the type of truth statement it is, the context in which it is said, and numerous other factors.

So what about the truthfulness of the Bible?

The discussion above is why it is so difficult for some people to answer the question, “Is the Bible true?” Is that question referring to scientific truth, historical truth, relational truth, mathematical truth, poetic truth, or some other type of truth?

Initially, the answer to all these questions seems to be “Yes.” Many would state that “No matter what type of proposition or claim the Bible is making, it is true.” 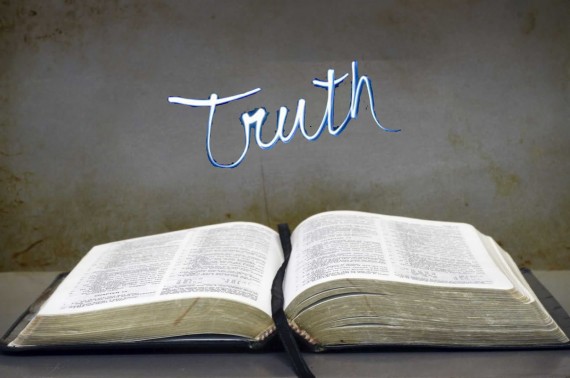 Earlier in this post, we talked about mathematical and scientific truth claims in the Bible.

In my One Verse Podcast, we have been looking at some of the claims in Genesis 1 (which some people believe are scientific truth claims … but I don’t). In Genesis 1:6, we read that God placed a firmament in the sky to separate the waters above from the waters below.

As I pointed out in the podcast, the word “firmament” means a hard dome. So is it true that there is a hard dome up in the sky which holds back a heavenly ocean from falling upon us?

Ah, so then the Bible has errors?

I do not believe so (as I explain the Podcast). While Genesis 1:6 may not be scientifically true, there are other ways that a statement can be true. The key is figuring out how Genesis 1:6 is true.

Take the truth claim of the Bible that “God is love.” Is that true? Well, of course it’s true. But it is not mathematically or scientifically true. It is relationally true. It is a statement about God’s character and nature.

No, of course not. Psalm 68:4 is poetically true, describing the glory and majesty and power of God.

Or how about the parables of Jesus? Are they true?

Well, of course they are true!

But was there really a landowner who went away and when he sent back servants to receive the income from the land, the tenants of the land killed all the servants? And so the landowner finally sent his son, thinking the tenants would listen to him, but instead, the tenants killed the son as well? Did that really happen? Maybe … but its highly unlikely, and the reason Jesus told this parable, was not to teach a historical truth, but to teach a theological and relational truth about his own mission and ministry.

We could go on and on, but here’s the point:

Asking that second question is key in properly studying and understanding the Bible.

This sort of approach to Scripture allows us to take a more nuanced view of the doctrine of inerrancy.

I Believe in Inerrancy

Biblical Inerrancy is loosely defined as the idea that the Bible is without error. That everything on which it speaks, it speaks truly.

I agree with this.

I believe the Bible is true. I believe every word of it is true.

And in fact, I am going to go further than most inerrantists I know. I believe the Bible is more true than most of them believe.

But I do not qualify my belief in the truth of Scripture this way at all. Because of how I understand truth, I believe the Bible is true more than inerrantists do.

I know these sorts of statement will make people mad, but here’s the thing: I believe that these debates about who truly believes the Bible and who doesn’t are just the smoke and mirrors of religion.

Debates About Inerrancy are Debates for Control

It is a powerful argument in the minds of many to be able to say, “I am right and those people over there are wrong because they don’t believe the Bible, and so you better listen to me.” But every time I hear this sort of language coming out of a teacher or a ministry, I run away faster than I would run from a roaring lion.

The claim, “You don’t believe the Bible is true” is nothing more than a smokescreen put up by manipulative religion to discredit or ignore a challenging teaching or idea about the Bible which disagrees or contradicts what that religion teaches. This accusation is played as a trump card, but it turns out to be nothing more than a joker.

But if we can stop arguing about inerrancy, we can return instead to what has true value, which is actually discussing the biblical text itself. We can talk about how a passage is true, even if we know it is not scientifically or historically true.

Does this way of thinking help you know that you can trust Scripture as true? I hope so. Let me know your thoughts and questions in the comments below.