You are here: Home / z / Will Licentiousness and Lewdness send you to hell? (Jude 4, Jude 7) 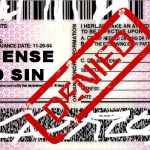 In this podcast episode, I discuss how to avoid hypocritical thinking in politics, answer a listener question about Jude 4, and discuss what the eternal fire in Jude 7 refers to.

How to Avoid Hypocrisy in Politics 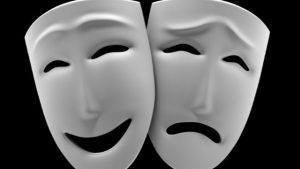 Listen to the podcast for the full discussion, but the bottom line truth is that whenever you think about criticizing a political opponent or person for their actions, first consider whether you would say the same thing if someone from your own political party had done the same thing. (Chances are, someone from your own political viewpoint HAS done the same thing… when that happened, what did you say or do?) If you would be silent, then remain silent now. If you spoke out, then feel free to speak out now.

Question from a Listener on Jude 4

How do you harmonize eternal security with the book of Jude? Especially the statement in Jude 4 about licentious men who deny God and Jesus Christ. It says they abuse the grace of God and turn it into licentiousness or lewdness If a person, pastor, teacher, etc promotes eternal security, aren’t they teaching and promoting licentious, saying we can sin/abuse God’s grace and still be saved? I read Zane Hodge’s Power to Stand, an exposition on Jude and it brought some confusion/questions, one of the many questions I had long ago. I was wondering if you might answer it. I am grateful for your website and ministry! Thank you! I appreciate it!

I do believe in eternal security and grace is one of the primary reasons I hold to eternal security. In my Gospel Dictionary course I have a lesson on grace, and in it, I said this:

It is extravagant, outrageous grace which shocks all sense of propriety. God is shameless in His love for us, so that even when we say and do things that would chase off any human being, God sticks with us and by us. As soon as we seek to limit God’s grace or restrict it to a holy few, we have stopped believing in grace and have plunged headlong into the hell of religion. Grace is free! Absolutely free. It has no limits, borders, restrictions, or conditions. It is freely given and freely received, and as such, can never be rescinded or revoked. There is nothing that can be done (or not done) to earn, merit, or deserve grace. Grace cannot be increased or decreased, merited or demerited. Grace is infinite, universal, and free.

I can hear the objection already: But if grace is how I have been describing it above, won’t people take advantage of this kind of grace? The answer to that is “Of course they will!” But grace that comes with restrictions to avoid being abused is no longer grace. In fact, true grace, by definition, opens itself up to being abused. It is not true grace if it cannot be abused.

So yes, by definition, grace can be abused. It opens itself up for abuse. If God limited grace so that it could not be abused, then it would no longer be free. It would instead be earned or deserved because we gained it or kept it through certain God-approved behavior. 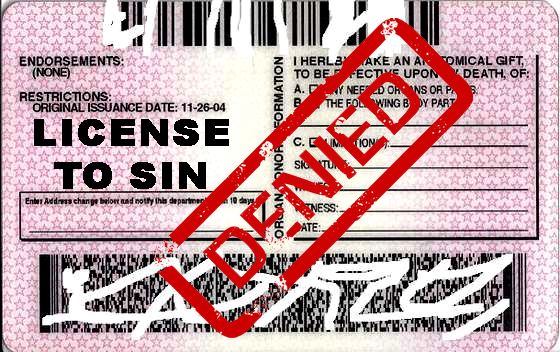 Now, I have written and taught in the past that grace does indeed allow you to sin all you want. So does the Jude 4 warning apply to me? Am I one of the teachers Jude 4 warns you against? No.

And here’s why. From the context in Jude 4, it appears that these teachers were saying that Christians could go sin all they want, and such behavior doesn’t matter. There are no serious consequences to such behavior. In this form of teaching, grace is a license to sin.

I teach no such thing. I teach that while grace does allow you to go sin all you want, when you really understand grace, it actually teaches you not to sin. Grace teaches us to deny ungodliness and worldly lust, as we read in Titus 2:11-12. 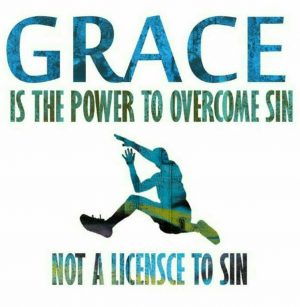 So the teaching on eternal security is not a license to sin. It is not licentiousness. It is the opposite. We uphold the grace of God in all its glory, and also know that grace, when it is properly taught and understood, teaches us to live righteously and godly in this present world. Grace, when truly grasped, is not the freedom to sin, it is the freedom to truly start living.

That is a brief explanation of Jude 4 in relation to the question of eternal security.

As long as we’re here in Jude, let’s look ahead a couple verses and also consider Jude 7 for our Scripture text of this podcast episode.

The Eternal Fire in Jude 7

The warnings of Jude 7 relate to what we just discussed from Jude 4. I have written and taught about this text previously in the lesson on “Fire” in the Gospel Dictionary Online course, and also in my book on Hell, titled What is Hell?

Here is what we read in Jude 7

… as Sodom and Gomorrah, and the cities around them in a similar manner to these, having given themselves over to sexual immorality and gone after strange flesh, are set forth as an example, suffering the vengeance of eternal fire (Jude 7)

As frequently seen in this study, the image of fire in Scripture refers to the temporal destruction of cities. This is also what is described in Jude 7, where the author points to the destruction of Sodom and Gomorrah as examples of what happens to those who stray from the will of God. However, some point to the phrase at the end of the verse that the cities are “suffering the vengeance of eternal fire” as evidence that Jude is talking about eternal suffering in the flames of hell. However, several contextual insights reveal that this is not what Jude had in mind.

First, this reference to the destruction of Sodom and Gomorrah is parallel to the preceding two examples. Jude loves to give examples in triplicate, and so prior to writing about Sodom and Gomorrah, he writes about the death of some of the Israelites in the wilderness because they did not believe (Jude 5), and the imprisonment of some angels in everlasting chains while they await judgment (Jude 6). 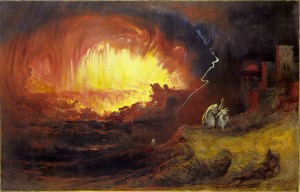 The first example of the Israelites in the wilderness clearly refers to physical death, rather than to eternal torment in hell. The example of the angels is more difficult, since we are not quite sure what event Jude has in mind. But many believe he is referring to the “sons of God” who had sexual relations with the daughters of men in Genesis 6, and were imprisoned as a result. Yet notice that while these angels are imprisoned in chains and darkness, they are not being tortured with fire. In fact, darkness and fire are mutually exclusive. And since angels are immortal, they cannot be killed. Therefore, they were imprisoned and are awaiting judgment.

This third example of Sodom and Gomorrah is a combination of the first two. Like the angels, the inhabitants of these cities committed sexual immorality and went after strange flesh. This is referring to the fact that the cities were inhospitable and attempted to rape the angels who visited them (Gen 19:4-7; Ezek 16:49-50). The result of this behavior was that the cities of Sodom and Gomorrah were destroyed with fire.

But we also know that Jude was not referring to the eternal flames of hell because of what he writes in Jude 23. Jude writes that it is possible to pull people out of the fire. This is, of course, exactly what happened with Lot and his family. They were rescued, pulled, or delivered from the flames that destroyed Sodom and Gomorrah, and Jude indicates that similar deliverance can happen today.

If Jude was referring to the flames of hell in this text, then he would be teaching that it is possible to rescue and deliver people from hell after they are already there. But few who believe that hell is a place of everlasting torment in fire are willing to say that it is possible to rescue the people who are there. It is better to recognize from the context that Jude is not thinking about eternal torment in the flames of hell, but rather the everlasting destruction of cities due to temporal flames. 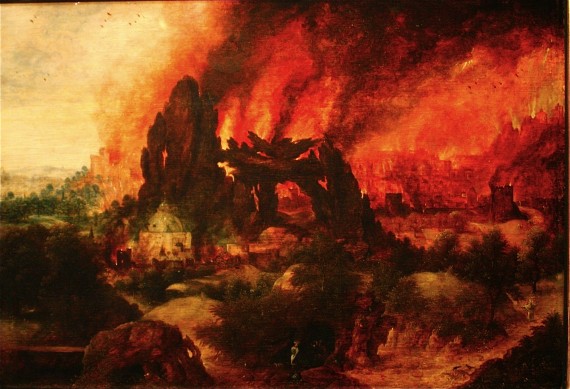 Indeed, this is exactly how to understand the phrase “suffering the vengeance of eternal fire.” To begin with, “suffering the vengeance” is probably not the best way of translating the Greek (Gk., dikēn hupechousai). In 2 Thessalonians 1:8-9, the Greek word dikē means “penalty” or “justice” (Dikē was the Greek god of justice). The second word, hupechō, appears only here in the New Testament, and literally means “to undergo” or “hold under,” and carries the idea of experiencing something.

So the phrase itself means “to undergo justice” or to “experience justice.” And as frequently mentioned elsewhere, this experience of justice, or this penalty, is not sent by God but is brought upon someone through their own actions. Sin carries its own penalty with it. This is exactly what Jude says in verse 10 when he writes that the false teachers “corrupt themselves.” The corruption and punishment that come upon people is not sent from God but is brought by a person upon their own heads.

Jude says that this self-inflicted punishment upon Sodom and Gomorrah was “eternal fire.” This does not mean that the cities are still burning, for they are not. It means that the fire that fell upon these cities destroyed them completely, and they have not been rebuilt (cf. Rev 18:9, 18). This is true, for the cities of Sodom and Gomorrah were in the location of what is now the Dead Sea. 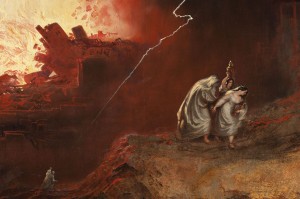 According to historical accounts from the New Testament era, the Dead Sea was also known as the Lake of Fire, where there were frequent bouts of flame and smoke, burning sulphur, and where everything that went through it collected a tarnish of oily soot and grime (cf. Gen 19:24-28; Deut 29:23; Isa 34:9; Jer 49:17-18; Rev 20:10). In the days of Jesus, the valley was still smoking and smoldering, and they assumed it would go on that way forever. This is what Jude has in mind when he speaks of the cities suffering the vengeance of eternal fire. It is not hell, but is the ongoing, physical destruction and devastation that came upon those cities.

And this is the overall truth that Jude is presenting in Jude 4 and Jude 7. Abandoning grace, or turning grace into a license to sin without consequences, is a recipe for disaster. Though grace does allow itself to be abused, the abuse of grace leads to devastation and destruction in the person’s life who does it. It invites fire into a person’s life, which sweeps through their life, leaving behind only dust and ashes.

So don’t abuse grace. Grace is given to us so that we might live free. Therefore, live in the freedom for which you have been set free.

To learn more about these sorts of truths, join my online discipleship group and take the Gospel Dictionary Online Course.