You are here: Home / Money, Tithing, and Greed 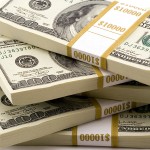 One of the bloggers I read is Greg Boyd. I have also read several of his books. Here is a post he made back in 2007 which deserves a repost:

It’s hard to deny that capitalism is the best economic system around. It creates wealth far better than feudalism, communism, som or any other system one could name. But for all its advantages, capitalism has one major drawback that Kingdom people need to be concerned about: capitalism requires people to stay perpetually hungry for more. If Americans as a whole ever followed Paul’s instruction to be content with basic food and clothing and not pursue wealth (1 Tim. 6:6-11), our economy would come to a grinding halt. The undeniable truth is that capitalism runs on greed.

So it’s not surprising that people raised on capitalism tend to be greedy. We don’t think of ourselves as greedy, for it’s hard for fish to notice the water inside their own aquarium. But the evidence is all around us.

Americans enjoy a lifestyle that is about four times the global average. Yet we on average spend 97 to 98 percent of our wealth on ourselves – despite the fact that close to a billion people live on the threshold of starvation with 40,000 dying each day of issues related to poverty, malnutrition and preventable or treatable disease. This is greed. We are hoarding resources while neighbors lack adequate food, shelter and medicine.

This should greatly concern followers of Jesus, for Jesus had a lot to say about greed and the need to care for the poor. Jesus lists greed as a sin right next to adultery (Mk 7:22). He criticized the religious heroes of his day for being preoccupied with maintaining a nice religious exterior while their hearts were full of “greed and self-indulgence” (Mt. 3:25; Lk 11:39). These people meticulously followed religious rules, but because they loved money (Lk 16:14) they “neglected the more important matters of the law” which include “justice” and “mercy” (Mt. 23:23). In other words, their religious appearance notwithstanding, these people hoarded resources and didn’t share with the poor. For Jesus, this omission rendered the rest of their religious behavior irrelevant.

Along the same lines, when a man wanted Jesus to settle a legal dispute with his older brother over how much of the family inheritance he should receive, Jesus said, “Man, who appointed me a judge or an arbitrator between you” (Lk 12:13-14). He was basically asking the man, “Do I look like your lawyer”? (Notice how Jesus refused to get pulled into politics!) He then warned the man, “Watch out! Be on your guard against all kinds of greed; for life does not consist in an abundance of possessions” (vs. 15). “However you work out your legal and political issues,” Jesus was saying, “never let greed get lodged in your heart.”

Jesus then drove the point home further with a parable about a farmer who “yielded an abundant harvest” — so abundant that he didn’t have adequate storage space for it. After thinking about the matter, he decided he’d simply tear down his barns and build bigger ones to store his surplus food. He could then “[t]ake life easy; eat, drink and be merry” (vss. 16-19). In other words, with his stored-up wealth he could retire and live “the good life.”

I suspect most of us Americans would have thought the same way. The man frankly seems to be guilty of nothing worse than being a good capitalist! You come upon some extra cash, so you enjoy life more and retire a little early. It’s called “the American dream.” What’s the big deal?

Yet, Jesus taught that God called the man a “fool,” for it turned out this man was going to die that very night. And then, most ominously, Jesus said, “This is how it will be with those who store up things for themselves but are not rich towards God” (12:20-21).

The problem was not that the man happened to get wealthy. While riches are considered dangerous and the pursuit of wealth is forbidden (I Tim. 6:9-10), neither the Old nor the New Testament takes issue with wealth as such. The problem with the wealthy farmer was that he was not also “rich towards God.” He didn’t submit his (God-given!) wealth to God but instead considered only how he and his family could benefit from his fortunate harvest. In other words, he was greedy.

Jesus tells us that unless we give up all our possessions we cannot be a disciple of his (Lk 14:33). I don’t interpret this to mean that we can’t legally own anything, since most of the disciples he was speaking to continued to earn money and live in houses. But it does mean we can’t consider anything we legally own, or any money we legally earn, to be our possession. They belong to God, and as such, we are called to seek his will as to how our wealth should be spent. Whatever he allows us to enjoy, we should enjoy (I Tim. 6:17). But whatever he leads us to share with the poor and invest in our churches, we must obediently let go of.

There is no fixed percentage given in the New Testament about what percentage of a person’s wealth they are allowed to keep. But given that most of us Americans are the wealthiest people on the planet, and given that we’re surrounded by people who are starving to death, we need to seriously question whether we’re really listening to and obeying God if we’re keeping 97% of our wealth for ourselves.

What do you think. Is he right, or can we just call him a “sot” and go back to purchasing everything we set eyes on?