You are here: Home / From Passover to the Lord’s Supper

The first “Lord’s Supper” was actually a Jewish Passover meal (cf. Matt 26:17-30; Luke 22:7-23). A typical Jewish Passover meal involves lots of food and wine, with numerous symbolic items and actions during the meal. It commemorates the deliverance of Israel from slavery in Egypt, and through the meal, Jesus is showing that in Him, all the world is now delivered from slavery to sin and death. The worldwide Exodus occurs in Him. 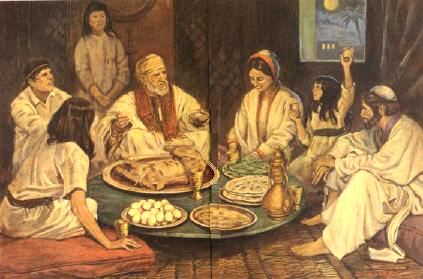 In the Gospels, there is no instruction from Jesus that the church should continue to practice and observe this meal. And even if there was, the Apostles and the early believers would have understood Jesus to be referring to the annual Passover meal, rather than a monthly, weekly, or daily observance.

Transitions to a Regular Meal

Yet something happened in the early years of the church so that by the time Paul writes 1 Corinthians, it appears that the believers in Corinth are regularly gathering to observe something called “the Lord’s Supper” (1 Cor 11:20). There were problems with the way they were observing the meal, and so Paul provides some corrective instruction about this meal (1 Cor 11:17-34). As part of these instructions, Paul refers to the Passover meal which Jesus shared with His disciples on the night before He was crucified (1 Cor 11:23-26). So somehow, in the span of a few decades, the Lord’s Supper goes from referring to the once-a-year observance of Passover to being a more frequent meal of fellowship with other believers.

It is difficult to know exactly how this transition occurred, but there is one likely theory. It is true that initially, the Lord’s Supper was a Passover observance. After Jesus died and rose from the dead, the new believers understood that the death and resurrection of Jesus was the central event in the history of the world, and that all Christian belief and practice focused around this pivotal event.

At the same time, the early church was struggling to survive against persecution from the Romans and the Jews, and also striving to protect itself from false teachings about Jesus. There were also numerous people who had questions about Jesus and this new way of life that many people were being baptized into. Furthermore, one of the central practices and customs of Middle Eastern culture was fellowship and discussion around meals (cf. Acts 2:42-46). All of this together made mealtime the perfect opportunity to teach and answer questions about Jesus, encourage one another to stand strong in the face of persecution, and simply share food and fellowship with one another as was the custom.

Furthermore, since the death and resurrection of Jesus was central to Christian belief and practice, and since teaching was often done with the help of symbols, it probably became customary as a part of nearly every meal where Christians were gathered, to remind people that the bread they were eating represented the body of Jesus which was broken for them, and the wine they were drinking represented His blood. While early on, it appears that the believers met daily for this purpose (Acts 2:42-46), it seems that later on, they may have met once a week or so in a formal fashion (Acts 20:7-11).

By the time Paul writes 1 Corinthians, it appears that the tradition was firmly established that part of the meal of fellowship between believers included remembering the death of Jesus as symbolized by bread and wine.