You are here: Home / Paul through Mediterranean Eyes 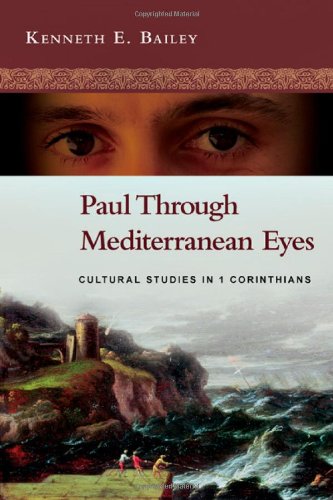 The study of Scripture in its cultural background has always been a primary interest to me. Even more than grammatical context, the cultural context of Scripture provides keys to properly understanding and applying the Scriptures. I believe that when we begin to understand the culture and history behind a Scriptural figure or book of the Bible, the Scriptures not only come to life but are also more easily applied to life.

And so it was with great excitement when I was recently asked to review Kenneth Bailey’s new book, Paul Through Mediterranean Eyes: Cultural Studies in 1 Corinthians.

Kenneth Bailey is one of the leading scholars in the world on cultural background studies of, and his books on Jesus

have been extremely helpful in my own research of Scripture.

As it turns out, I missed quite a bit. Bailey spent forty years living and teaching in the Middle East, and while much has changed there since the days of Jesus and Paul, there is much that has not changed as well, and these forty years of first-hand experience provide Bailey with a unique perspective on the Scriptures which every reader and teacher of Scripture can benefit from.

For example, in 1 Corinthians 5:5, Paul instructs the church to hand the sexually immoral man over to Satan. This instruction has caused much confusion and debate within the church over the centuries. What does it mean? How should it be done? Bailey points out several things from a cultural/historical perspective. First, the word “man” is not there (p. 164). Here is Bailey’s explanation:

Literally, Paul writes “surrender this…to Satan.” This is a Middle Eastern way of talking. In English we usually translate it “surrender this man,” but the word man is missing. When Paul writes, “surrender this…to Satan,” the readers can add whatever adjective they want. It can be “this idiot” or “this fool” or something stronger. This same style of speech appears in the parable of the pounds in Luke 19:14. In that story a group of citizens who hate the nobleman send an emissary (presumably to Rome) to say, “We do not want this…to rule over us.”

I currently work with lots of people from Middle Eastern cultures, and when I read this, I knew exactly what Kenneth Bailey was explaining. I am often speaking to an individual about someone they strongly dislike (even hate), and rather than refer to that other person in any way, either by their actual name or even some derogatory name (that fool, that idiot, that moron), the person I am talking to will simply say something like, “I can’t stand to be around that… any longer!” Often, in place of the “…” they will wave their hand dismissively, or insert a non-verbal grunt.

Just last week I was speaking to a Jewish individual who was very upset at someone else, and for most of the conversation, I had absolutely no idea what he was talking about. I didn’t even realize he was talking about a person until half way through the conversations. He kept saying, “I can’t be around that…!” and he waved his hand off in the general direction of a group of people. “Around what?” I asked? “You know!” he said. “This…grunt.” I finally figured out that he was talking about a person, and who this person was he was upset with, but I realized that in Western Culture, we insult people by calling them derogatory names. In Middle Eastern culture, it appears that it is a greater insult to keep someone nameless, than to give them a derogatory name such as “fool” or “idiot” (or something more vulgar and crude).

Does any of this help us understand what Paul meant to “surrender this…to Satan”? No. But it does bring the passage to life a bit, and reveal the humanness of Paul. He is pretty disgusted with this fellow. Bailey does go on to point out that he believes Paul wanted the church to kick this man out of their fellowship, which would be pretty shocking back then, since there was only one church in a community. Today, of course, the practice would not have the same effect, since such a man could just go down the street and join a different church. So what we must do, it seems, is find other ways to practice church discipline. Bailey rightly points out that Paul’s goal was for this man to repentance and restoration to the church. So the church today must find ways of leading people toward repentance and restoration. Today, kicking people out of the church will not accomplish this. We must find other means.

It is this sort of helpful cultural background information which pervades this book by Bailey. As such, I highly recommend it as a valuable resource for anyone who wants to understand more about the cultural context of 1 Corinthians and the Apostle Paul.

The Cultural Structure of 1 Corinthians

However, these cultural background insights are not the primary focus of the book, nor the primary reason Bailey wrote it. Instead, Bailey wrote the book to defend a particular structure of 1 Corinthians which he believes is present within the letter. Many scholars and students have struggled with the structure of 1 Corinthians, as it seems to be a loosely connected assortment of ideas about various topics and questions that concern the Corinthian church. Some view the book as an extended Q&A session between the Corinthian Christians and Paul. They wrote him a letter with some questions and issues they were facing, and he is now writing back to answer those questions.

Bailey believes this is not at all the guiding structure of 1 Corinthians. In fact, he believes that 1 Corinthians was not written primarily to the Corinthians at all, but was intended to be a circular letter for all the churches in the region, and that the letter is not loosely organized at all, but is a literary masterpiece based on a Middle Eastern form of writing which is unrecognizable to most Western readers and scholars.

What is this structure? Well, Bailey calls it “Prophetic Rhetorical Homily” which is not that helpful unless you know what Bailey is talking about. It comes in numerous forms, but none of them follow the typical “Outline Form” which is popular in western logic (A, B, C, D, E). First, is what Bailey calls the “Ring Composition” form, which is also known as a “Chiasm.” It has one central point, around which circle several sets of parallel points (A-B-C-B-A). But this is not the only form. Bailey also unveils the Double-Decker Sandwich (A-B-A-C-A), Step Parallelism (A-B-C-A-B-C), and others (cf. pp. 528-529).

The basic argument of Bailey is that 1 Corinthians is composed of five major Prophetic Rhetorical Homilies, all of which use numerous types and formats of these Middle-Eastern thought structures. If Bailey is right, then 1 Corinthians truly is a literary masterpiece composed by a prophetic rhetorical master, the Apostle Paul.

I, however, remained unconvinced. Maybe it is just because I am so immersed in western ways of thinking. As I read Bailey’s proposal, I tried to imagine the what it would take to write a letter this way. It seems it would have taken months upon months of careful composition, with writing, and rewriting, structuring and restructuring. I suppose that if someone was brought up in this way of thinking pattern, writing this way would come naturally, just the western thought flow comes relatively naturally to us.

However, if this were true, that Paul naturally thought and wrote this way because of his Middle-Eastern mindset, wouldn’t we see this pattern in all of his letters? But Bailey admits we do not. He says that 1 Corinthians is unique in this way among all the letters of Paul (p. 22). So in other words, this prophetic rhetorical homily way of writing is not Paul’s default style. Therefore, if Bailey is correct, Paul must have carefully crafted and organized 1 Corinthians around this intricate and detailed swirl of prophetic homily thought structures.

Yet the structure of 1 Corinthians which Bailey suggests is so complex, I personally had trouble imagining that Paul took the time to compose his letter in such a way. It seemed much more likely that Bailey was trying to impose a structure upon 1 Corinthians that was not really there. And indeed, as I studied the patterns and structures which Bailey suggested, this often seemed to be the case. Certainly, I think the structure is obviously present in many cases, but this does not mean it is present everywhere in the letter, as Bailey suggests. As examples, the second and third s of Paul (4:17-7:40 and 8:1-11:1) do not seem to exactly fit the prophetic homily structures, and many of the internal pieces also seem forced into unnatural forms.

In the end, while I cannot see the pervasive use of these structures throughout the letter, the ones that are present do help illuminate and reveal the meaning of the text, and aside from this, the cultural background insights of this book make it an excellent addition to the library of any pastor, professor, or student who seeks to understand the message of 1 Corinthians.

FTC Disclosure: This book was sent to me by IVP for review on this blog.