You are here: Home / What Does Queen Elizabeth Tell Us About King Jesus?

This is a guest post by Mike Gantt. He is a retired corporate executive and former pastor who blogs at: 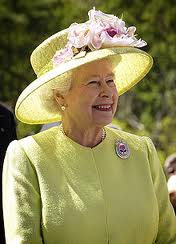 This year marks Queen Elizabeth’s Diamond Jubilee – her sixtieth year on the throne of the United Kingdom.

According to Wikipedia, she is “the constitutional monarch of 16 sovereign states known as the Commonwealth realms, and head of the 54-member Commonwealth of Nations. She is also head of state of the Crown Dependencies.”  This makes her head over millions upon millions of people.

But does anyone do what she says?

Jesus famously asked, “Why do you call me ‘Lord, Lord,’ and do not do the things that I say” (Luke 6:46).  He was anticipating that many of His disciples would treat Him like Queen Elizabeth’s subjects treat her – as an ornament.

Consider how many people worldwide watched the wedding of Charles and Diana, the funeral of Diana, and the wedding of William and Kate.  Much of humanity is devoted to perpetuating the honor of the British royal family.

But how many of these people are actually trying each day to do the will of William and Kate?

Similarly, the institutional church is devoted to Jesus Christ. It’s all about lip service.  No one gets more pomp and circumstance than the Lord Jesus. Three billion of the world’s seven billion inhabitants confess His name.

Yet how many of those three billion are trying each day to do His will?

There is an enormous difference between lip service and actual service.  Lip service is what the Pharisees were giving God, and Jesus called them on it in Matthew 15 when He quoted Isaiah 29:13:  “This people honor me with their lips, but their heart is far away from me.”

Jesus was thus indicating that giving God mere lip service is a perennial problem – not just something that manifested itself in His generation.  It was found before Him, and it would be found after Him.  It is certainly found today.

If we are to serve Jesus with more than our lips it will require breaking the cycle of going to church as the primary expression of our service.

That’s like going to a parade for Queen Elizabeth as your primary means of obedience to her.  It may suffice for Elizabeth, but Jesus died for more than that.

In fact, clergy generally equate serving church with serving Christ.  This is the ugliest usurpation of authority we can find in the earth today.

I should know.  I was a typical pastor.  I didn’t want people to stop and help others on the way to church – otherwise, they’d miss church.

Church today is like Jericho complaining that the Good Samaritan had shown up a day late and a dollar short while the priest and the Levite who’d left the victim on the roadside had done the proper thing by hurrying on to their destination instead of helping out.

Queen Elizabeth will be content with all the festivities associated with her Diamond Jubilee Year because she’s not really expecting to have any meaningful influence over the lives of her subjects.

King Jesus, however, has much more in mind.  In fact, He’d just as soon dispense with all the pomp and circumstance just so that we might love one another just as He commanded us – starting right now, wherever you are.