You are here: Home / Redeeming Church / The Satanic Messiah vs. The Suffering Messiah 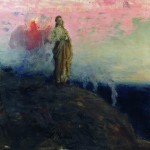 Have you heard of the Satanic Messiah? Probably not, since most people usually don’t think of Satan and the Messiah as having anything to do with each other.

Yet surprisingly, worship of the Satanic Messiah may be more common than we realize.

In fact, such worshippers may exist in our own town … maybe even in our own church!

What is the Satanic Messiah? 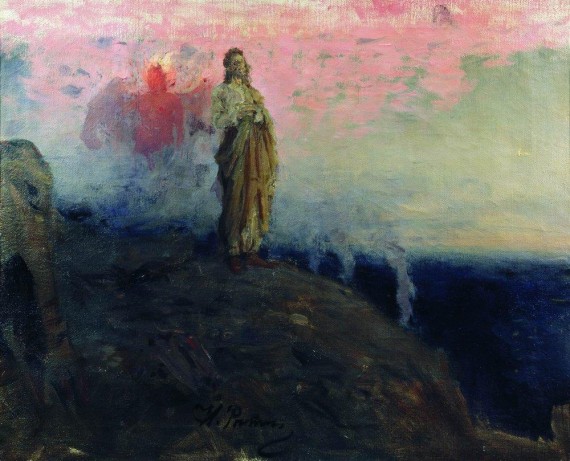 Where is this Satanic Messiah so that we might avoid Him and warn others to do the same?

This Satanic Messiah is the Messiah which is often preached from the pulpits and beheld in the books of modern Christianity. If modern Christianity has patterned itself after Jesus, then the Jesus we present to the world is not the Jesus who rejected the offers of self-reliance, control over others, and glory before men, but is the “Jesus” who has accepted such values and now holds them up as virtues.

Where is such a “Jesus”? He can be found all around us. He can sometimes be found in our churches, homes, and in our own treatment of others.

If the church is the representative of Jesus to the world, then to the degree that the church seeks to meet our own needs before the needs of others, desires to control the beliefs and behaviors of others (both inside and outside the church), and chases after glory, fame, power, wealth, and recognition before men, is the same degree to which the church presents Jesus as a Satanic Messiah to the watching world.

Don’t be shocked by such a statement. This is not new. Mankind has always tried to make God in our own image, and God has always been trying to reveal Himself to us as He really is. We have wanted a God of self-reliance who needs nothing and nobody, who glorifies Himself by destroying His enemies and forcing every molecule into submission to His will, and who requires that all people worship and adore Him lest they face the torment of His eternal wrath. 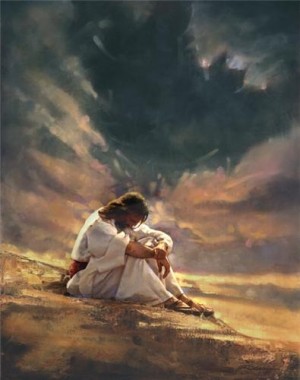 But in the face of this grotesque depiction of a manmade-God, God has been trying to show us since the very beginning in Genesis 1, that He is a God of light, love, hope, healing, mercy, grace, and forgiveness. As a result of God’s eternal love, He created human beings so that we might love Him in return. He wants our love, but knowing that He cannot force love, He woos us and invites us and calls us to Him, but we, being the worst of all possible lovers, slander His name, drag Him through the mud, tie Him up in a dark corner, and eventually even crucify Him on a barren hill. And all the while we declare that it is God Himself telling us to do these things.

It’s insanity. When God sends His messengers of grace and love to show us what He is really like, we get so upset that someone is threatening our idea of a God-who-looks-like-us, that in the name of God we kill the very messengers of God. This is what we have been doing since the very beginning. It’s what we’re doing today. It is also what we did in the days of Jesus when the “image of the invisible God” walked among us. Jesus was not despised, rejected, condemned, and ultimately killed by the sinners and so-called “enemies of God,” but by those who claimed to know God best.

All of this better helps us understand what many Bible scholars call “the Messianic secret” in the Gospels. Have you ever noticed that as Jesus went around preaching and performing miracles, almost any time someone recognizes Him as the Messiah, He instructs them to keep quiet about this and tell nobody else? Since we all assume that Jesus came to declare Himself as the long-awaited Messiah, we get confused when Jesus prohibits people from telling others that He is the Messiah.

Why would Jesus want to keep His identity secret? Why does He want His role as the Messiah to remain a secret?

The reason, I believe, is because the Messiah the people wanted was not the Messiah Jesus came to be. The people of Israel wanted a warrior Messiah, one who would slay the enemies of Israel, overthrow the corrupt and pagan Roman Empire, slaughter the wicked, and set up Israel as the ruling nation over all the world.

The Messiah the people of Israel wanted was the same Messiah that Satan offered to Jesus in Matthew 4 and Luke 4.

Jesus knew that if word that “The Messiah has come!” spread around the countryside, many people would start little rebellions in their towns, believing that this was what the “Messiah” wanted them to do. Thousands of people would show up with swords in hands, ready to follow the “Messiah” into battle against Rome. Since this is not what Jesus wanted, and not at all the kind of Messiah He came to be, He told people to keep quiet about Him being the Messiah. He needed to show them what kind of Messiah He was before He would let them announce that the Messiah had come.

We see this exact same scenario play out on a smaller scale in Matthew 16. Jesus asks His disciples who He is, and Peter, by the Holy Spirit, says that Jesus is the Messiah (Matt 16:16). Jesus praises him for this answer, but then immediately tells them not to let anybody else know (Matt 16:20). A few verses later we learn why. Jesus instructs His disciples that since He is the Messiah, He must go to Jerusalem to suffer and be killed.

But the disciples do not want to hear this. Peter, the one who just proclaimed that Jesus was the Messiah, pulls Jesus aside and tells Him to stop saying such things (Matt 16:22). The Messiah is to kill His enemies; not be killed by them. The Messiah is to rule and reign and conquer; not suffer and die. At least, this is what Peter thinks.

How does Jesus respond? He rebukes Peter as speaking for Satan (Matt 16:23). He says that the Messiah which Peter has in mind has nothing to do with the ways of God, but is based entirely on the ways of men. This is the Satanic Messiah.

Jesus then goes on to say that if we truly follow Him, we will follow Him into death and self-sacrifice (Matt 16:24-26), not into power, glory, self-advancement, and control over others.

The Spirit of the Anti-Christ

When we put all this together, then we also begin to understand the New Testament teaching about the anti-Christ. 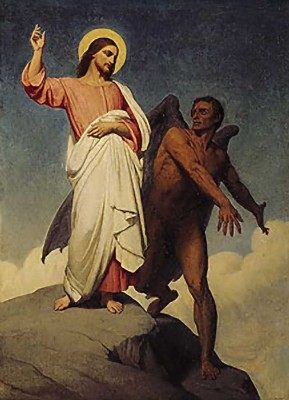 If the Christ is the Suffering King who bleeds and dies for His enemies, who loves and accepts all, and who has no desire to control others but only to serve them, then any “Christ” which is used to defend war and violence toward enemies, to reject and divide from others, and to control and manipulate others for personal gain, is the anti-Christ.

Any portrayal of Christ that allows Jesus to accept the offers that Satan made to Jesus in Matthew 4 and Luke 4 is a false Christ, an anti-Christ, a Satanic Christ.

The Church and the Satanic Messiah

But has not the church accepted and adopted for ourselves the very things that Jesus rejected in Matthew 4 and Luke 4?

If so, are we not wanting, desiring, proclaiming, and following a false Christ, an anti-Christ … a Satanic Christ?

In many ways, the church has become just like Peter.

When we lust for power over others instead of giving power to others, we are following the Satanic Messiah.

When we desire to control the beliefs and behaviors of others instead of trusting that God will lead them as He leads us, we are following the Satanic Messiah.

When we call for the death of our enemies “in Jesus’ name” instead of seeking to serve our enemies in His name, we are following the Satanic Messiah.

When we chase after wealth, power, prestige, glory, and fame instead of choosing to love, give, bless, and forgive, we are following the Satanic Messiah.

Instead of helping people in hopeless situations, we give them authority figures who tell them what to do.

Instead of seeing that we are all brothers and sisters on this earth and that our struggle is not against flesh and blood, we create false divisions based on skin color, cultural traditions, religious preferences, and invisible geographical boundaries called “borders.”

Instead of seeking to be reconciled to our enemies, we seek revenge upon them by asking leaders to bomb them, kill them, or at the bare minimum, round them up and lock them away.

We cry out for freedom from oppression, not so that oppression can cease, but so that we ourselves can become the oppressors.

We vote in leaders who promise to change everything else so that we ourselves do not need to change.

The Satanic Messiah is alive and well, and I sometimes think he is worshipped and followed more than the one true Messiah, Jesus, our Suffering King.

Which Messiah do you worship, and why?