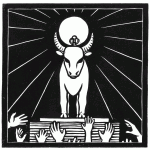 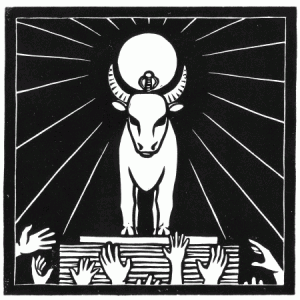 We live in a materialistic society, and most of us have been swayed by the siren song of “stuff.” Steve Taylor’s song, “Cash Cow” is a warning to us all that chasing cash is a form of idolatry that began way back in the Sinai desert.

One of the things I love about this song is the way it starts out slow, and then become more and more frantic and noisy as the song progresses. This is one of the things that makes Steve Taylor’s music so compelling. He doesn’t just sing words; the music itself is often a work of art, telling the story along with the words. As we fall into the trap of the Cash Cow, it always starts small. We just want a small pay raise, or a nicer phone. And before we know it, we have been hypnotized into chasing every new fad and fashion that comes along.

And churches are not immune. Do we really need the gilded handbells, the silk-lined robes, and the glistening bell tower? Or do we buy such things because we are listening to the whispers of the Cash Cow? No matter how many times I listen to the song, the closing words always get me:

I, too, was hypnotized
By those big cow eyes
The last time I uttered
Those three little words
“I deserve better!”

Oh, and by the way, Cash Cow is not really “sung.” It is more “spoken.” Steve Taylor performed numerous songs this way, some of which are “Drive, he said” and “Lifeboat.” Watch the video below and you will see what I mean. As far as I know, this form of music is unique to Steve Taylor, which is another reason I enjoy his music so much.

It was a morning just like any other morning…in the Sinai Desert…1200 B.C.

It glistened, it glowed, it rose from the gold of the children of Israel (and most of the adults).

The golden Cash Cow had a body like the great cows of ancient Egypt.
And a face like the face of Robert Tilton (without the horns).
And through the centuries it has roamed the earth like a ravenous bovine seeking whom it may lick.

Woe to you, proud mortal!
Secure in your modest digs.
You think you’re immune?
You, who couldn’t finger said cow in a police line-up with the three little pigs?

Cash Cow–Master of Disguises.
Who’s gonna change shape at will?
Who’s the eye in the pyramid on the back of the dollar bill?
Who loves power lunching from Spago to the Sizzler?
Guess who’s coming to dinner?

One yank on that udder,
Will land your butter,
In a sling.
First one’s free.
Cow junkies take heed.

Cash Cow, coming to getcha!
Why? Because you think this is stupid, don’t you?
The Cash Cow will not be mocked!
The Cash Cow’s planning a coup!
The Cash Cow chews cud bigger than you!

Woe, woe, woe to you who blow off this warning.
Perhaps you’ve already been licked…

I, too, was hypnotized
By those big cow eyes
The last time I uttered
Those three little words
“I deserve better!”