You are here: Home / The Heresy in Debates about James 2 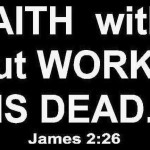 Everywhere I turn, Christians and churches are debating James 2:14-26, and especially the role of faith and works.

The primary problem with such debates is that they cause us to ignore the rest of the book of James, which the church so desperately needs to hear. As we debate James 2, we continue to show favoritism in church (James 2:1-9), gossip and slander one another (James 3), judge, condemn, and fight with each other (James 4), and misuse, abuse, and neglect the poor (James 5).

I say we should stop all debates about James 2:14-26 until we have obeyed the rest of the book. (Frankly, if we did that, I think it would clear up James 2…)

I was thinking about this earlier today, so it was with great appreciation that I read the following comment on the blog of Alan Knox, who was quoting Arthur Sido at his blog, The Voice of One Crying Out in Suburbia:

I asked Beoda and another young boy, Stevenson, to write their names in the small Bible I brought with me on the page facing the first chapter of James to remind me that James is not speaking of theological concepts to be debated in the ivy covered halls of academia. He was speaking of real people, real orphans who had their lives turned upside down. Real widows who lost their husband and often had children to care for in a very different, very difficult world. James was writing about Beoda and Selene, about Stevenson, about Kimberly.

The great tragedy–can I call it heresy?–of James 2 is not necessarily where we stand on the issue of faith vs. works, but how we allow this debate to sidetrack us from the message of James that we so desperately need to hear and obey today.