You are here: Home / Throwing Hammers at Glass Churches 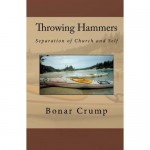 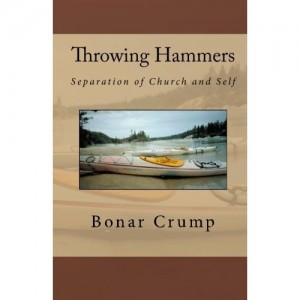 Bonar Crump is an aggressive blogger, and his book, Throwing Hammers – The Separation of Church and Self follows the same approach. It is edgy, squirm-in-your-seat, good writing.

He certainly has something to say, even if you don’t like how he says it. Frankly, however, I think he writes what a lot of people think and feel, but do not have the courage to say. Well, Crump says it. And with gusto.

Like what? Well, cover the eyes and ears of your children, here are some examples:

We’ve created a system of healing which is completely off-limits to anyone that might be bleeding, infectious, or near death. We’ve segregated ourselves from those we can help the most. We’ve erected so many barriers between our hospitals and the outside world that we have become irrelevant! WTF indeed… (p. 35).

Why do we tolerate pricks within our churches? I’m not talking about among the folks being ministered to—I’m talking about within the ministerial branches of our churches (i.e. pastors, elders, deacons, teachers, nursery workers, etc.). …If you area prick and you are making life difficult for the rest of us then you have to pack your shit and go! We’ve got enough problems around here meeting people’s needs and teaching them how to love their neighbors without you setting such a piss poor example! (p. 59).

I imagine that reading such statements, many Church-Going Christians would say “This is not proper language for a Christian,” to which I imagine Bonar Crump would respond, “Damn right! That’s the entire point!”

And I’ll be honest. He does have a point, especially when he provides solutions for how we can stop being pricks. Check these quotes out:

The path starts with being lovable. (I’m not talking about being cute and cuddly, always smiling, and ready to hug anyone that walks in the door.) …It means to be gracious, compassionate, respectful, tolerant, humble, attentive, patient, kind, gentle, joyous, peaceful, and reverent—it means to be a servant. If you don’t start at this point then everything else is worthless! It’s really not that difficult to gauge—if people around you don’t enjoy your company, are forced to tolerate your speech and/or behavior, and really don’t want to invite you to the party then you being very lovable (p. 58).

Jesus, of course, is the perfect example:

He’s outside sitting on the curb consoling one of the bus drivers who just found out that his wife of 35 years has cancer. He’s across the street on the corner giving a homeless guy a dollar. He’s up the street trying to break up a fight between two guys arguing over a parking space.

He’s engaging in people’s lives—holding the hand of a woman who lost her baby during delivery—buying a beer for the guy at the end of the bar who just got laid off—counseling the couple who are standing on the brink of divorce—consoling the “life partner” of a man who just died of AIDS—trying to talk a kid out of taking his own life (p. 69).

In the end, I believe Crump presents a great vision for “the church” which appears to be much closer to the image of Jesus in Scripture than most of what I see elsewhere today.

Here is how he describes the ideal church:

There wouldn’t be any robes or hymnals or pews. The focus would be on providing the local community with a “rally point” for health and human services. …Our church would be run by social workers, nurses, teachers, program coordinators, and public health professionals. …Every day of the week our building would be used for some sort of event which would assist our community (p. 79).

He goes on to describe this is more detail, but to get it, you will have to read the book for yourself.