You are here: Home / We Cannot See Till We Have Faces 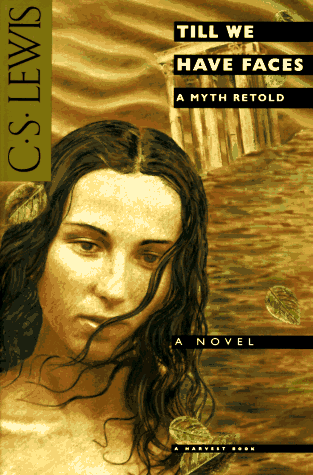 Till We Have Faces

is my favorite novel by C. S. Lewis. He wrote that it was his favorite as well, though when the book came out, it was not well received by the public, and never gained much notoriety. Even today, few people even know that he wrote the book.

I think that part of the problem is that even among those who have read the book, few understand what it is about. I am by no means a C. S. Lewis expert, but as I try to read through other things that C. S. Lewis has written, I have stumbled across some statement by him about this book, which I think sheds some light on its meaning.

Let me attempt to share this meaning with you, without destroying the plot of the book too much.

The book tells the story of three princesses, Orual, Redival, and Psyche. As their father the King had no sons, Orual was destined to become Queen, but she was very ugly. Redival, the middle sister, was beautiful, but was also lascivious and vain. However, the third sister, Psyche, was blessed the beauty and the temperament of the gods. She was not only beautiful, but was wise and kind. I cannot really tell much else about story without ruining it, except maybe to say that after much pain, tragedy, and betrayal, Orual becomes Queen and rules for many years.

Near the end of her life, she writes a complaint against the gods. She claims that though she has done nothing but serve and honor them her entire life, they have given nothing in return but pain, grief, and destruction. She recognizes that she is powerless before them, but she feels that if there is one thing she can do against them, it is to make her complaint known by writing it in a book, and making it available for people everywhere to read. That book is the first part of C. S. Lewis’ Till We Have Faces.

But after she finished writing her complaint, she is given a vision. A vision of her life. A vision of her life replayed, but not from her perspective, but from the divine perspective, the perspective of the gods. It is they who saw the entire picture, while she saw only her small part. And this vision shows her that she has been wrong in her anger, and hatred, and bitterness toward the gods. It was not they who treated her so wrongly, but she who treated others wrongly. It was not they who were punishing her and destroying her life, but it was her own actions and behavior that brought pain upon herself.

But even then, the gods took her actions, which had caused so much pain for so many people, and used them to accomplish good in the lives of others, especially those of others that she dearly loved.

When she learned all this, she wrote a second book, which she concludes with the following statement:

I ended my first book with the words “no answer.” I know now, Lord, why you utter no answer. You are yourself the answer. Before your face questions die away. What other answer would suffice? Only words, words; to be led out to battle against other words. Long did I hate you, long did I fear you. I might–

And with that, she died.

Here, I think, is the message of the book: We do not have faces until God makes one for us, and this He will only do by forming one from the garbage of our own lives. Until we learn to see ourselves clearly for who we really are, we see nothing clearly at all. In this book, Orual is brought face to face with herself, and hates what she sees. But it is only after she sees her soul’s twisted face that she is given a new face, a beautiful, shining, radiant face of the gods. The most critical statement in the book is this one:

I saw well why the gods do not speak to us openly, nor let us answer. Till the word can be dug out of us, why should they hear the babble that we think we mean? How can they meet us face to face till we have faces? (p. 294).

Here are a few other quotes from the book which opened my mind in wonder:

For all I can tell, the only difference [between reality and a dream] is that what many see we call a real thing, and what only one sees we call a dream. But things that many see may have no taste or moment in them at all, and things that are shown only to one may be spears and water-spouts of truth from the very depth of truth (p. 277).

When she stands on trial before the gods, she has this dialogue with another person who is there:

“I cannot hope for mercy.” [Orual]

“Infinite hopes–and fears–may both be yours. Be sure that, whatever else you may get, you will not get justice.” [The Fox]

It is quotes like this from a master story-teller like C. S. Lewis which makes Till We Have Faces

such a great book.