You are here: Home / Is The Command to Tithe SO Old Testament?

This is a guest post by Jesse S. Greever. He is a follower of Christ, scientist, business man, and author. He has written a number of works of fiction with digital publisher Untreed Reads and co-authored a book on stewardship with Marc Farnell, Senior Pastor of Cross Ridge Church in Little Elm, Texas. That book, Learning to Give in a Getting World,

aside from being an encouragement to Christ-followers who want to give to God, is also a memoir of what can happen when Christians answer the call to give. You can follow Jesse on Twitter and Facebook. If you would like to write a guest post for this blog, check out the guidelines here.

Any time the topic of giving and stewardship arises, there is likely to be some variation of the following statement: “I don’t believe tithing is a New Testament concept.”

And while the comment is often bandied about in an off-hand way, it does bring up an important question: Is tithing a command for Christ-followers?

It is true that tithing has its foundations in Old Testament Levitical Law, and even before the law was given to Moses, as in the story of Abraham bringing a tithe to Melchizedek. And it is true that Christ came to break the chains of legalism and offer salvation through grace. But does that necessarily negate the our obligation to tithe (and beyond)? 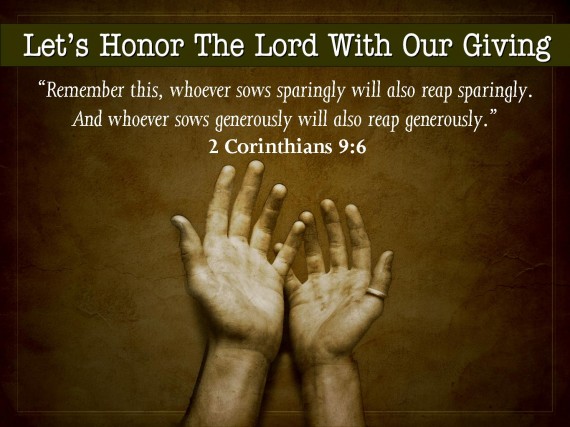 Woe to you teachers of the law and Pharisees, you hypocrites! You gave a tenth of your spices–mint, dill and cummin. But you have neglected the more important matters of the law–justice, mercy and faithfulness. You have have practiced the latter, without neglecting the former” (NIV).

Notice the last sentence. Jesus said they should have shown justice, mercy and faithfulness WITHOUT neglecting the tithe.

The argument about the relevance of the tithe to the modern Christ-followers really misses the point, though. Why do we squabble over percentages, when all throughout the New Testament, generous and sacrificial outpouring is modeled by Jesus and His followers?

Jesus poured out everything He had, gave up His throne in Heaven and emptied himself out for our salvation, even down to His last drop of blood.

In Acts 2:41-47, we are told of the early church and how they sold everything they had to make sure that none of their brothers and sisters were in need.

In 2 Corinthians 8, we are told of the churches of Macedonia, and of their pleading with Paul to give beyond their means in the face of extreme poverty to assist the believers in Jerusalem.

When we scan through our monthly bank statements, does our allocation of money really reveal a true desire to sacrifice for the will of God? Are we following the model of the early believers in Jerusalem and Macedonia, or have we allowed the American Dream to dilute our generosity?

We buy houses we can barely afford, pay exorbitant amounts of money to maintain 500 television channels of mostly garbage, have enormous flat-screen TVs, multiple gaming systems, expensive tablet computers, smartphones we don’t even know how to fully use, and all of these things suck our precious (and sometimes highly limited) financial resources away.

And then we feel the prompting of the Holy Spirit, convicting us to give to God the way He intended, and we find ourselves scratching our heads, wondering how on earth we could fin any money left over to give to accomplish God’s will in the world.

Wouldn’t it be more appropriate to wonder how we can afford such extravagant waste after we use our resources to further the Kingdom of God?

Even in the face of economic turmoil, we are still one of the most affluent societies on earth. Let’s face it, by the global standard we are rich, and that wealth has made us complacent in our dependence upon God for provision. The early church was made up of the poor and the destitute who had nothing but dependence on God to provide for their daily needs.

In our modern-day society, what needs do we really have that require us to look heavenward?

We have so much more than those early believers.

Why do we look around us, and see so much need when we venture outside of our cozy bubble of comfort, and balk at the idea of using just a small portion of our resources to minister to those in need? Why are we so reluctant to give? Why can’t we look to the models given to us in the New Testament, smack ourselves on the head and say “How could we be so foolish?”

When we compare ourselves and our current situation to the soul-crushing poverty of the first-century church, perhaps our question should not be “Do I have to give?”

Instead, shouldn’t we be asking: “Could I ever possibly give enough?”