You are here: Home / We See in the Bible What We’re Told To See

Have you ever seen this video? Watch it and follow the instructions carefully…

If you’ve seen the video before, you know what to look for, but if you have never seen the video, you might have been shocked at what the end of the video revealed…

I think that sometimes, the way we read the Bible is similar.

We have been taught by books, pastors, seminaries, and Christian friends for so long to read the Bible a certain way and look for certain truths in Scripture, that when someone comes along and says, “Yeah, but did you notice the gorilla in the text?” we reject such an interpretation and say, “No! That’s not there! I have read and studied the Bible for years and have sat through countless sermons, and since I have never heard that idea before and no pastor I have listened to has ever brought that up, it must be wrong! I went to seminary and never heard that in any class!”

Maybe I’m only talking about myself.

For the past 7 or 8 years, I have been struggling with Scripture. Some days it almost literally feels like I am wrestling with the Bible. There is all my theological education on one side, screaming at me “Count the number of times the people in white t-shirts pass the ball!” and then there is a still, small voice over on the side saying, “Yes, but did you notice … ?”

I’m trying to notice. I really am. But it is so hard to retrain the mind to see and hear something else. 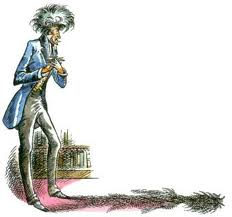 I was reading The Magician’s Nephew to my daughters last night, and there is a part in the story after Digory, Polly, and Uncle Andrew witness the creation of Narnia where C. S. Lewis explain why Digory and Polly could understand what the Narnian animals were saying but Uncle Andrew could not. It all began when Aslan was singing Narnia into existence and Uncle Andrew convinced himself that the lion was not actually singing, but was only growling. From there, Uncle Andrew’s logic carried him the rest of the way, so that by the time he is surrounded by curious Narnian animals, all he sees is dangerous, brutish beasts who want to eat him. Lewis says that by that point, it would have been impossible for Uncle Andrew to have ever hear the animals talking.

As I read this, I felt like I was Uncle Andrew. There are things I feel like I have believed for so long about God and the Bible, that I am not sure I could ever un-believe them, simply because I have believed them for so long. Try as I might, and despite all the people speaking into my life (and even the still small voice of God), I find it extremely difficult to believe something other than what I have believed my entire life.

I’d rather not say.

Last time I wrote about some of the things I was having questions about, I lost my job…

That’s why for now, on this blog, I am going to have to steer away from my series on the violence of God and write about something I feel a little more confident about.

I ran a survey earlier this week, and the response was overwhelmingly positive. Over 98% of you want to know more about Calvinism, and specifically, why I am NOT a Calvinist. So, I am going to start that series on Monday.

Just so you know, however, I will still be trying to see the gorilla in the text. I will try to believe what some have been whispering to me, that “animals talk” and that the Lion is not going to eat me.