You are here: Home / Redeeming Theology / What is the Gospel? (Give me your best definition) 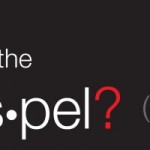 I am writing a book on the gospel, and want your input.

Specifically, I would love your definition of “the gospel.”

What is the gospel?

Ready? Go! (And along with the comment section check out the course below to see how others have defined the gospel.)