You are here: Home / Why did Jesus come to earth?

One of the key things we see throughout Scripture is that we are surrounded by malevolent forces which seek only one thing: the destruction of mankind. 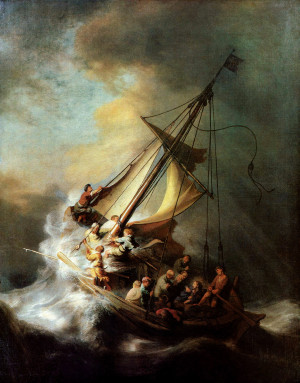 These forces are presented in different ways throughout Scripture, but the common theme remains the same: these powers seek to destroy humanity. They seek to ruin our lives here and now, and they seek to destroy our future lives in eternity. There is a whole system of theology inherent within this point which will summarized in future posts.

For now, note that according to the New Testament, one of the primary reasons Jesus came to earth was to stop the destruction.

First John 3:8 says that Jesus came so that He might destroy the devil’s work. Since Satan is sometimes referred to in Scripture as “the destroyer” this is somewhat a play on words by John in that Jesus is here to destroy the work of the destroyer.

To Destroy the Works of the Destroyer

And indeed, this is one of the things we see throughout the ministry of Jesus.

Jesus did not come to earth just to die on the cross for our sins and rise again from the dead. If that were the case, there would have been little need for Him to be born as a human, and minister for three years through teaching, performing miracles, and casting out demons. He could have simply shown up, died on the cross, risen from the dead, and been done with it.

No, everything that Jesus did and said was intended to expose the powers for what they are. Through His birth, life, teaching, miracles, death, and resurrection, Jesus revealed His preeminence over all creation, and showed the emptiness of the power and promises of the devil. He exposed the devil’s lies, laid bare the deceit and darkness that had come upon the earth, and revealed a new way of living in peace and unity with God, one another, and all of creation.

Once we have this perspective, we can see it all over in the Gospels. It is easiest to see when Jesus casts out demons and delivers those who are in bondage to evil spirits, but the work of Jesus in destroying the devil’s work is also seen in nearly everything Jesus says and does. Jesus heals people, not just because He loves people who are sick (which is true), but also because sickness is a result of sin and death. Healing people is one way of destroying the devil’s work.

Similarly, Jesus performs miracles over creation, such as calming storms, and providing record catches of fish, not just to show that as God incarnate He is in control of such things, but because life-threatening storms and frustration in our work are signs of an out of control creation, a creation that is subject to futility and groans in expectation for the sons of God to be revealed (Rom 8:19-22). The things that Jesus did showed the reversal of this futility and frustration, and put the powers of destruction and chaos on notice that beauty and order was once again becoming the norm.

Finally, even the teaching of Jesus was an act of spiritual warfare against the works of the devil. Satan has blinded the minds of unbelievers so that they will not see the truth (2 Cor 4:4), but beyond even that, the devil uses all sorts of lies and deceptions to confuse and enslave even those who have believed in Jesus for eternal life. Even though we follow God and His Word, this does not mean that we are free from the destructive and deceiving influences of the devil.

Quite to the contrary, the teachings of Jesus challenged many of the principles and presuppositions of religion, which should tell us something about the primary location and focus of many of the falsehoods of Satan. It has often been argued that religion—as a man-made attempt to get back into God’s good graces—may be one of the most satanic and devilish institutions on earth. This too, Jesus came to destroy.

The teaching of Jesus was a warfare activity which challenged the lies of the devil and pointed people to who God really intends for humanity, and what our place should be in this world.

Why am I pointing all this out? Because viewing Jesus in this way helps us get closer to an understanding the violent portrayals of God in the Old Testament.

When we remember that Jesus reveals God to us, and when we read Jesus backward into the violent portrayals of God, something beautiful and surprising begins to emerge from all the blood and mayhem on the pages of Scripture.

We will begin to see what some of this is tomorrow…