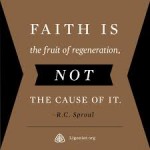 1 John 5:1 is sometimes cited in reference to the Calvinistic idea that regeneration precedes faith. The statement in question is found in the first part of the verse, as quoted below:

In his article about the Calvinistic teaching that regeneration precedes faith, Dr. R. C. Sproul cites 1 John 5:1 as evidence for this teaching. In doing so, he quotes from the NRSV translation of the Bible, which more clearly brings out the point that Sproul is trying to make:

Everyone who believes that Jesus is the Christ has been born of God (1 John 5:1).

Note that by translating the verse this way, being “born of God,” or regeneration, seems to precede faith, which in context is the belief that Jesus is the Christ.

R. C. Sproul is not the only Calvinist to have this understanding of 1 John 5:1. The view is quite common. Here, for example, is a quote from leading Calvinistic author and apologist, James White:

And what is the inevitable result of being born of God? Belief that Jesus is the Christ. …this means that in 1 John 5:1 the belief in Jesus as the Christ is the result of being born of Him. … Therefore, sheer consistency leads on to the conclusion that divine birth precedes and is the grounds of both faith in Christ as well as good works (James White, The Potter’s Freedom, 288).

Calvinistic scholars and commentators defend such a view by pointing to the Greek tense in the text.

I don’t want to get too lost in the technical weeds on this text, which would be easy to do, since there is a great debate among top Greek scholars about how to understand the “time” of present participles in Greek.

For now, let me just say that 1 John 5:1 is not the only place in John’s writings where he pairs a present participle with a perfect tense verb. In John 3:18, for example, John quotes Jesus as saying, “He who believes [present participle] in Him is not condemned [perfect tense verb].” I do not think that even Calvinists would say that people believe in Jesus as a result of not being condemned. To the contrary, according to the Calvinists, the whole world lies under condemnation, and even though they would say that regeneration precedes faith, I have never heard of any Calvinist who claims that being freed from condemnation, or being declared “not guilty,” or being justified, precedes faith as well.

In the more immediate context, 1 John 5:10 is also helpful. John writes that “he who does not believe [present participle] God has made Him a liar [perfect tense].”

It seems quite obvious from this verse, that God being made a liar does not precede a person refusing to believe God, but vice versa. When a person does not believe God, it is as if they are claiming that God is a liar. The perfect tense, “making God a liar,” is a result of the present participle, “not believing.”

We could go on and provide numerous similar examples, not just from the writings of John, but from other New Testament authors as well, but we have seen from just a couple of examples that present participles in connection with perfect tense verbs do not clearly indicate anything about the timing of one compared to the other. To say that they do is to read one’s theology into a text in order to get it to say something it does not.

Some Calvinists recognize this, and so avoid the “verb tense” argument and point instead to the Greek word for being born (Gk., gennaō) in 1 John 5:1. 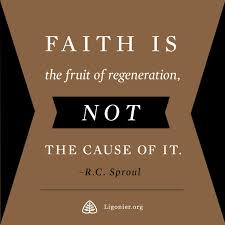 They argue that wherever this word is used in 1 John, it produces various results. Along with faith, they say that being born of God produces righteousness (2:29), the ability to stop sinning (3:9), and love for God and others (4:7). In every one of these cases, the verb for “born” is in the perfect tense, matching almost perfectly the tense usage in 1 John 5:1. And since practicing righteousness, avoiding sin, and loving God and others are all results of being born again, rather than conditions to it, it seems that faith also must be a result of being born again, rather than a condition of it.

1 John 5:1 is not teaching the Regeneration Precedes Faith

There is an alternative understanding to 1 John 5:1, however, that does not resort to the idea that regeneration precedes faith.

In this first letter of John, he is describing the conditions and characteristics for fellowship with God and with one another (1 John 1:3). He is not giving tests of life or doctrinal and behavioral indicators by which to determine whether or not you have eternal life. No, John is writing to believers who are facing an early form of Gnostic heresy and is instructing them to turn away from that false dualistic teaching, and instead come into a fuller understanding of God who is light and love. In this way, they will have true fellowship with God and with one another.

Related to this, the idea of being born (Gk., gennaō) in John’s letter is the way he is describing the new life which all believers share with God and through which we come to know Him more intimately. The phrase “born of God” which is frequently found in the letter, is not exactly a reference to being justified or having eternal life, but is a way of speaking about the new divine characteristic that is created inside each and every believer.

To use Pauline terminology, being “born of God” is to be new creation, to have a new man (cf. Col 3:9-10). So when John writes about being “born of God,” he is describing the characteristics of this aspect of our life, and contrasting it with the part of us that is “of the world.” Again, Paul would write about being “of the flesh.”

This helps make sense of what John writes in 1 John 3:9 where he says that “Whoever born of God does not sin.” He is not saying that true Christians never sin, for that would blatantly contradict what he wrote earlier in his letter, where he said that everybody does sin, and the one who claims he does not sin is a liar (1 John 1:8-10).

This helps us make further sense of the various places in 1 John where we read about what it means to be “born of God.” The part of believers that is “born of God” helps us practice righteousness (1 John 2:29), helps keep us free from sin (1 John 3:9), helps us love God and others, (1 John 4:7), and helps us continue to believe that Jesus is the Christ (1 John 5:1).

When understood this way, it becomes clear that 1 John 5:1 is not referring at all to the initial faith which grants a person eternal life, but rather to the ongoing faith which is necessary for sanctification and godliness.

Certainly, as believers in Jesus we need ongoing faith, and what would be more natural and right than for the new birth to serve as an instrument of God whereby our faith in Christ grows and multiplies?

The Christians to whom John was writing were already believers, but they were in danger of falling prey to unhealthy teaching about God. In writing to them, John encourages these believers to rely upon their new birth in God for teaching, instruction about righteousness, abiding in faithfulness, and remembering that Jesus is the Christ, and that by Him, they have life in His name.

John is not concerned with that question at all. Instead, John is concerned that these genuine believers to whom he is writing—who already have been regenerated, who already have eternal life, and who are already born of God—will abide and remain in that position of being born of God, so that their righteousness, fellowship, and faith will grow and increase daily.

He wants them to live in the light they already have, and not be swayed by darkness and lies of the false teachers in their midst.