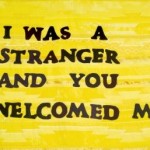 James (not his real name) and his brother had been convicted of murder. Both were given life sentences and had begun doing their time. But then (for reasons I won’t go into here) the courts decided to give James a retrial. And while he was awaiting retrial, they allowed him to post bail and live under house arrest.

There was only one problem: James had no house in which to live while under house arrest.

So my wife and I offered to have James live with us in our house. We had a one-year old daughter at the time.

Nearly everyone in the church I was pastoring counseled us against such an action. They told us we were putting ourselves and our new daughter at risk. They told us his presence in our home would create stress on our marriage, from which we would never recover. Some of the people wanted to know if he would be attending our church. They were not sure they wanted a convicted murderer to be attending our church while he awaited trial.

But we took him in anyway. He lived with us for about 6 months. Eventually, James was found innocent, and has been living as a free man ever since. I even had the privilege of performing his wedding several years back.

I am not recommending that anyone do this. It is true what the people in my church said: Taking in a convicted murderer could be dangerous. So I do not share this story to say that everybody should follow my example. I myself might not follow my example if a similar situation arose today.

But at the time, based on where we were at in life, and based on what we knew of James and his situation, it was the right thing to do, and we never felt the least bit of fear or concern. We hope that we also were able to give James a sense of love, acceptance, safety, and comfort as he faced an uncertain future.

I think this is how the Christian concept of “hospitality” works.

The way Christian hospitality often functions in most churches today is that every once in a while, some people in the church invite other members of the church over to dinner. They eat a meal, share some stories, and then the guests go back to their own home.

There is nothing wrong with entertaining. Entertaining is a form of fellowship, and is a great way to get to know other people. My wife and I “entertain” all the time, and we thoroughly enjoy it.

Christian hospitality, however, is quite different.

In biblical times, hospitality involved allowing newcomers in town to stay in your house while they were there. It involved giving itinerant prophets a place to live. It included taking people in from the street where they were likely to get hurt. It may even include giving food and lodging to those who were too poor or too sick to care for themselves.

The common theme to hospitality, it seems, involves meeting a physical need of someone else, especially in regard to food, lodging, and safety.

It meant taking those who were in some sort of need or danger, and providing them with food, lodging, safety, and security. It meant making your home their home. 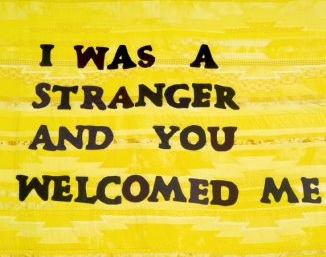 It might look like my friend Sam Riviera, when he takes food, clothing, and a kind word to the homeless people on the streets of San Diego.

It might look like my friend Dan Mayhew, who lets people live in his home in Portland.

It might look like the people all over the world who allow teachers like Wayne Jacobsen to stay in their homes while he is traveling or speaking.

It might look like my parents, who let a homeless man (and his dog) live with them for about a year while he was working to get his feet back under him.

It might look like my friends, Pam and Dona, who are allowing a woman to live with them while she faces numerous physical problems and has nobody else to take care of her.

It might look like my wife and daughters, who regularly helped an elderly neighbor with his yard work and grocery shopping after he had heart surgery.

As you can see, the forms of hospitality are as diverse as the people to whom hospitality is shown.

And then hospitality takes place when God brings people to our attention that have needs, and we seek to meet those needs with what God has given us.

Hospitality, as someone has defined it, is making someone else “feel at home.” How can we, as followers of Jesus, help others “feel at home” when they are in our presence? How can we put them at ease, serve their needs, give them comfort, safety, healing, and rest?

Hospitality is not true hospitality unless it makes us less comfortable and someone else more.

Do you have examples of how you or a friend showed hospitality to someone else? Do you have suggestions or tips on how people can develop hospitality? Share your stories and ideas in the comment section below.

Note: This post was part of the June 2015 Synchroblog. Here is a list of posts from the other contributors: