1 Corinthians 2:14 seems to be the perfect passage to defend the Calvinistic teaching of total inability, for it seems to say that the natural man cannot accept or understand the things of God.

But the natural man does not receive the things of the Spirit of God, for they are foolishness to him; nor can he know them, because they are spiritually discerned (1 Corinthians 2:14). 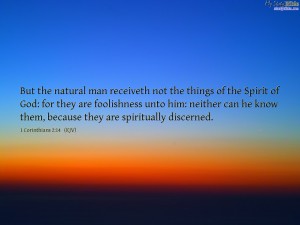 Regarding this verse, Calvinists are not shy in stating their beliefs about what it teaches.

This does not mean that a person cannot have a rational understanding of Christianity or of what the Bible teaches apart from the illumination of his or her mind by the Spirit. In one sense, a scholar can understand and even teach theology as well as any other branch of human knowledge. … [But] if they are asked their personal opinion of what they present, they say that it is all nonsense. It is in this sense that they, not being “spiritual,” are unable to understand Christianity (Boice and Ryken, Doctrines of Grace, 78).

Man cannot see or know the things that relate to the kingdom of God, without being regenerated first by the Holy Spirit. A dead spirit perceives only the things of man and Satan (Spencer, TULIP, 34).

The reason that the brilliant minds do not accept Christianity is that all minds are blind, unless they are regenerated. … Without the Holy Spirit one is not able to understand the things of God (Palmer, Five Points, 16).

As can be seen from these quotes, Calvinists use 1 Corinthians 2:14 to support the idea that unbelievers cannot grasp or understand the things of God. For this, they first need to be regenerated.

Calvinists have also been known to use this verse against other Christians who disagree with the Calvinistic teachings and doctrines. If a brother or sister in Christ takes a stand against Calvinistic theology, there are some Calvinists who will accuse this dissenter of having their minds darkened, of living without the Holy Spirit, and of being unable to spiritually discern the truth of Calvinism. I myself have had this charge leveled against me by Calvinists. The implication, of course, is that only Calvinists are truly Christians.

Sadly, such divisiveness within the Body of Christ is caused by a grave misunderstanding of Paul’s point in 1 Corinthians 2:14.

The Situation in Corinth

In Corinth there was much divisiveness as well, and one of the purposes of Paul’s letter was to correct the issues that led to this divisiveness. Paul knew that sometimes, correcting those who err is what leads to healing and unity. The faction in Corinth which was causing the problems believed in a hyper-spiritual form of Christianity. These “spiritual elites” are referred to throughout Paul’s letters as “the spiritual [ones]” (Gk., pneumatikoi).

They believed they had special knowledge and wisdom from God, special gifts from the Holy Spirit, and special insights into death and resurrection. This sort of hyper-spirituality led them to make a dualistic division between the physical realm and the spiritual realm, so that anything they did in the flesh did not affect their spirit, and vice versa. Such a belief had devastating consequences on the behaviors of the Corinthian believers, so that one of their leaders was even having sexual relations with his mother-in-law, and they were all proud about it (1 Corinthians 5:1-2). 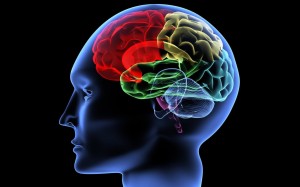 These three types of people reflect the three part of a person which we looked at in the discussion of Romans 7. But one should not read into these three divisions some sort of classification about whether or not people have eternal life. After all, though many identify the spiritual man with those who have eternal life, and the fleshly man with those who do not, what then are we to do with the soulish man? Instead, it seems best to see that Paul is talking about how all people learn spiritual things, whether they are regenerate or not. And how is that? People learn spiritual things through their spirit. Spiritual truth is spiritually discerned.

This is why, Paul goes on to say, he could not teach the Corinthians very much when he was with them previously. When he was there, they were operating out of their flesh, and so he could only provide them with milk teaching, not solid food for the mature (1 Corinthians 3:1-2). And indeed, though they now believe they are super-spiritual, Paul says they are still carnal, for they exhibit all the signs of operating through the flesh.

Again, all of this goes back to an understanding of how a person functions. The soul is the animating principle of a person, and it can operate through the spirit or the body. Since the soul is the seat of the imagination, memory, reason, and emotions, when a soul functions through the spirit, we can talk of a person being spiritually minded. But when a person operates through their flesh, they are carnally minded. Paul is saying that the Corinthian believers, though they have the Spirit of God, are carnally minded (1 Corinthians 3:1-17).

The Natural Man Cannot Receive the Things of God

So in 1 Corinthians 2:14,  Paul is simply saying that spiritual truth is not a product of reason, imagination, or emotions. Spiritual truth is spiritually discerned. That is all Paul is saying. Speaking to the Corinthian believers as he was, Paul is inviting them to not seek to learn about God by their reason and emotions alone, but through the Spirit of God which was in them. Of course, this does not set aside reason and emotions either, for these can operate through the spirit to discern spiritual truth.

The bottom line is that Paul is giving a warning to believers in 1 Corinthians 2:14 to not depend solely on their imagination, reason, or emotions to learn about God. In this way, though implications for unbelievers could be drawn from 1 Corinthians 2:14, this verse is not primarily about unbelievers at all. 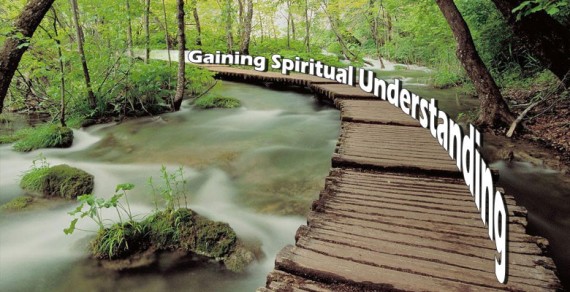 The NIV Translation of 1 Corinthians 2:14 is Tragic

This is partly why the NIV translation of 1 Corinthians 2:14 is so tragic. I indicated earlier that the NIV translation of the Bible leans heavily toward Calvinistic thinking and theology, and 1 Corinthians 2:14 is an example of one such place. Where most Bible translations accurately translate the Greek as saying something along the lines of “The natural man does not receive the things of the Spirit of God,” the NIV reads Calvinistic theology into this verse, and assumes that the natural man does not even have the Spirit, and so translated the verse this way: “The person without the Spirit does not accept the things that come from the Spirit of God.”

But as pointed out earlier, the “natural man” might be better translated as “soulish man” and has nothing whatsoever to do with whether this “man” has the Spirit of God or not. The soulish man is simply contrasted with the spiritual man and the carnal man of the following verses, showing the three realms within which a person can dwell.

Other Evidence for the Meaning of 1 Corinthians 2:14

William Barclay sums up the message of 1 Corinthians 2:14 quite well:

So in verse 14 Paul speaks of the man who is psuchikos. He is the man who lives as if there was nothing beyond physical life and there were no needs other than material needs, whose values are all physical and material. A man like that cannot understand spiritual things. A man who thinks that nothing is more important than the satisfaction of the sex urge cannot understand the meaning of chastity; a man who ranks the amassing of material things as the supreme end of life cannot understand generosity; and a man who has never a thought beyond this world cannot understand the things of God. To him they look mere foolishness (Barclay, Letters to Corinthians, 1975, 28).

The natural man, or soulish man, then, is not the man without the Spirit, or even the carnal man. The natural, soulish, man is simply referring to the person who relates to life solely through his intellect, emotions, and will, without regard to spiritual truth. While this may describe many people who are unregenerate, it by no means describes them all, and in fact, accurately describes quite a few Christians as well. A person who has the Spirit of God can be a soulish man just as much as one who does not have the indwelling Spirit.

Numerous other lines of evidence could also be drawn out from this verse to show that Paul is saying nothing whatsoever about the unregenerate person’s inability to understand or believe the gospel. For example, it could be argued that the “things of the Spirit” that Paul is referring to are about the deeper truths and mysteries of the gospel that Paul has been referring to previously in 1 Corinthians 2:9-15 (See Vance, The Other Side of Calvinism, 231). This would then have nothing to do with whether or not the unregenerate person could understand the offer of eternal life through faith in Jesus Christ, and believe in Him as a result. 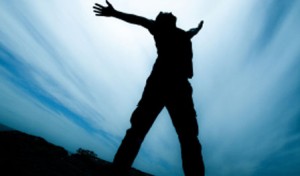 Furthermore, it could also be argued that when Paul says the natural man “does not” receive the things of the Spirit of God, “nor can he know them,” he is not referring to an inherent inability to do so, but rather to an antagonistic mindset that refuses to seek the truth and understand these things.

Why would a person refuse to seek the truth and understand the gospel? Because men love darkness rather than light (John 3:19). As Paul writes elsewhere, the mind that is set on the flesh (rather than the Spirit) is hostile and antagonistic toward God (Rom 8:7). People know that seeking the truth, believing in God, and following Jesus will require them to change their lives, and most are unwilling to do so. Paul’s “soulish man” is simply the person who does not obey the truths of the gospel because they are unwilling to learn the truths of the gospel.

Most dangerous of all was a mindset that was prevalent within the Corinthian church, which is also quite prevalent in various forms of the modern church, especially among those sorts of groups (like Calvinists and Charismatics) that require some sort of special knowledge, experience, gifting, or insight into the “deep things” of God in order to truly grasp the gospel and be used by God. This sort of teaching was part of the Gnostic heresy in the early church, but has worked its way through numerous forms of the modern church as well. On this subject, Philip J. Lee writes this:

Americans in the two opposing strains of Protestantism, the evangelical and liberal, along with many adherents of Pentecostal and holiness cults, would agree that religious knowledge is special knowledge that cannot be taught or learned by ordinary means (Philip J. Lee, Against the Protestant Gnostics, 113).

Can unbelievers understand the Scriptures?

Of course they can.

We are not Gnostics, and the Bible is not a book of mysterious magic and arcane knowledge which can only be grasped by initiates who have the sacred decoder ring. No, while understanding the Scriptures certainly takes serious effort and years of study, it can be understood and grasped by anyone who seeks to do so. To say that only the “elect” or only a special class of gifted Christians can understand the Scriptures is to fall into the ancient error of Gnosticism. Paul does not fall into this error, but instead says that if one is to understand spiritual truth, it must be spiritually discerned, which means that it must be studied through the use of the spirit.