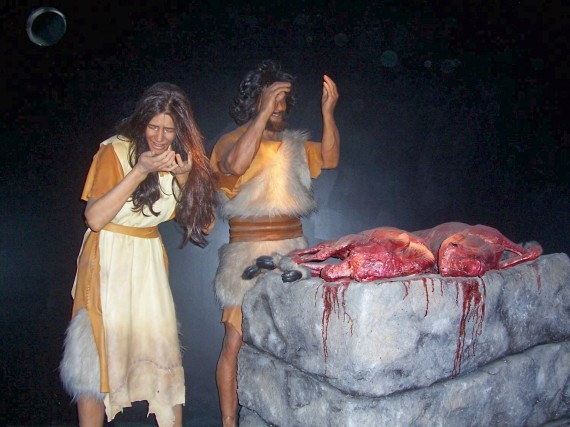 Many believe that the first sacrifice was carried out by God Himself in Genesis 3:21 which says that God made tunics of skin for Adam and Eve so that they could be clothed.

Did God Sacrifice an Animal in Genesis 3:21?

Although the text says nothing about a sacrifice, many believe that a sacrifice is implied.

It is often taught that after the first sin was committed, God wanted to show Adam and Eve that sin has consequences, and so He slew an animal in front of them, and made clothes for them from the hide of the dead animal.

Some have even speculated that the animal was a lamb, thereby presenting a prophetical picture of Jesus, the Lamb of God, slain from the foundation of the world (Revelation 5:6; 13:8).

Furthermore, some have argued that in this death of the animal, God was teaching Adam and Eve the theological principle of substitutionary atonement. He had told Adam that if they ate of the fruit they would surely die, and so after they ate of the fruit, God should have killed them, but instead He killed an animal in their place.

But Did God Really Perform the First Sacrifice?

But is any of this really true? Did God really practice the first animal sacrifice? Was it truly a lamb? Did God intend for Adam and Eve to learn about substitutionary atonement? 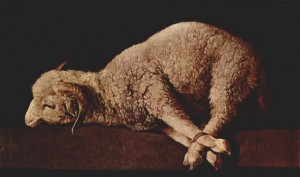 Frankly, this seems to be an awful lot to read into one single verse which says nothing other than that “God made tunics of skin, and clothed them.”

The death of an animal is never mentioned.

A lamb is never mentioned.

So where did God get the skin in which he clothed Adam and Eve?

Maybe he made it.

The word for “skin” that is used can refer to either human or animal skin.

There have been some streams of Judaism and Christianity which believed that prior to the event described in Genesis 3:21, humans did not have “skin” the way we see it today, but existed in some other form. They believed that we were “clothed in light” like God (Psalm 104:2) and that when Adam and Eve sinned, the light left them and they tried to replace the light with leaves (Genesis 3:7), which was an insufficient covering, and so God gave them skin instead.

This view is a little too mystical (or maybe even Gnostic) for most Christians, and yet it cannot be proven or disproven from the text any more than the traditional view that God killed an animal to make clothes for Adam and Eve.

Maybe it was snake skin. 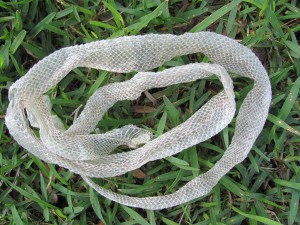 It is interesting to note, however, that one of the more common Jewish explanations of this text is that the skin which Adam and Eve were clothed with was snake skin. The Jewish Targum Pseudo-Jonathan says that the Lord made garments for Adam and Eve from the skin which the serpent in the garden had cast off. This seems pretty far-fetched if you have ever seen the papery skin shed by serpents.

A related view is that since God had said to the serpent, “he will crush your head and you will strike his heel” (Genesis 3:15 NIV), that Adam had taken it upon himself to kill the serpent by crushing its head with his heel, and from the skin of the dead serpent God made clothes for Adam and Eve.

This sounds far-fetched, but it is just as speculative as every other view.

We simply don’t know where the skin came from, or what kind of skin it was.

The simple fact of the matter is that the text simply doesn’t say how God made clothes for Adam and Eve. Therefore, we tread on dangerous ground if we claim that Genesis 3:21 contains the first sacrifice in Scripture, for it says nothing of the sort. All it says is that God gave them skin to wear.

We read substitutionary atonement and the sacrificial system into Genesis 3:21 at our own theological peril.