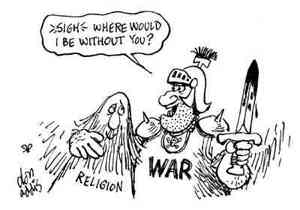 In Part 1 of this short series called “Satan Casts out Satan” we saw that although Satan stole dominion over the earth from Adam and Eve, Satan loves nothing more than to use violence to get rid of violence, and in so doing, consolidate and amplify his own power over the earth. One way he does this is through violent religion. This post looks a little more at this topic.

God was not inactive during this endless cycle of Satan using religion to “cast out Satan.” He constantly sent messengers, individuals, people, and even nations in an attempt to spread light and love in this dark world. But it is in these instances where Satan’s power really worked. Satan loved nothing more than to use redemptive violence against those whom God had sent so that God’s messengers were killed in God’s name (Matt 21:33-46, 23:34-37). How did Satan do this? Through religion.

God’s message to the world has always been a message of grace, love, mercy, forgiveness, and acceptance. But Satan has always taken God’s message and perverted it so that it becomes a twisted set of rules, regulations, sacrifices, and laws by which mankind seeks to regain God’s love and favor.

But whenever God sent messengers and prophets to proclaim grace to the world, religion reared up to condemn God’s message of grace as false, heretical, contrary to God’s will, and of the devil. Then, having used religion to convert God’s messenger into a messenger of Satan, Satan used religious redemptive violence to kill and destroy God’s messenger in the name of God.

Satan turns God’s messenger into “Satan,” and then uses violent religion to destroy this newly minted “Satan.” It is in this way that Satan “casts out Satan,” and once again, protects and consolidates his own power in the world. 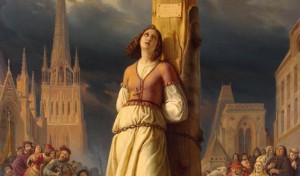 So by causing violence to be ascribed to God, and by using violent religion to “cast out Satan,” Satan had developed the perfect cycle of violence from which there seemed to be no escape. When bad things happened, it was God’s fault. And when God sent messengers to proclaim His truth and love, Satan vilified them until they too were killed in the name of God. This beautiful lie was perpetrated upon the world and carried out in plain view over and over and over since time began.

But when Jesus arrived, He began to unmask the lie and pull back the curtains on Satan’s scheme. He told people what God was really like. He invited people to turn away from violence, and live in love and forgiveness. He set people free from sin, from darkness, from slavery, and from hate. He called people to a new way of living.

This, of course, was not something Satan could allow. It was not something Satan could permit. And so he resorted to the same ploy that had worked millions of times before. Every previous time that God had sent a messenger, Satan raised up religion to kill God’s messenger in God’s name. Satan did the same thing with Jesus, believing that such a plan would work as it always had before. He got religion to condemn Jesus as a son of Beelzebub, a blasphemer, an idolater, as one who was opposed to God and God’s Word. And then Satan got religion to kill Jesus in the name of God. Satan used religion to turn Jesus into a “Satan” so that religion could then kill Jesus in the name of God. Once again, Satan sought to “cast out Satan,” and thus solidify and consolidate his power even further.

And just as it had always done before, the plan worked beautifully.

One can almost feel the confusion of Satan in the end the Gospel accounts as Jesus, who has struggled and taught and healed against all the death and destruction and lies of the devil throughout His entire three years of ministry, now goes silently to the cross, like a lamb to the slaughter. Satan does not see the trap until it is too late. 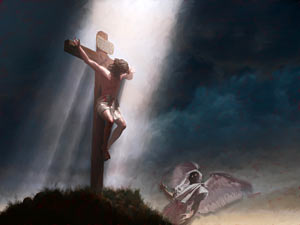 For all of human history, Satan cast out Satan so that he might continually reinforce his own power, and reinsert himself into human structures and institutions, forever consolidating and expanding his own power and dominion over God’s creation. But when he tried it with Jesus, he failed to recognize that he was snatching defeat from the jaws of victory.

Jesus Beat Satan at his own Game

Jesus, of course, knew what Satan was about. This is why He asked earlier in His ministry: “How can Satan cast out Satan?” (Mark 3:23). Jesus asks this question, but never answers it. Why? Because the answer was the key to His victory over Satan. The initial answer to Jesus’ question seems to be that “Satan would not cast out himself. It would be foolish to do so. For if Satan cast out Satan, then his kingdom would crumble, his house would fall, and his power would come to an end.” But Jesus knew, as did Satan, that the key to Satan’s power was that Satan had been casting out Satan since the beginning of time, but blaming his violent overthrow upon God.

But in the crucifixion of Jesus, when Satan tries once again to use violent religion to “cast out Satan,” this time in the scapegoat of Jesus Christ, Satan did not realize that his plan would backfire.

When Satan attacked Jesus through the crucifixion, Satan believed he was conquering over Jesus and casting Jesus out of this world once and for all. But little did he know that Jesus, by submitting Himself as the willing scapegoat for all the violence, enmity, hatred, and evil of the world, was unmasking the power and dominion of Satan, and thus, defeating Satan even as Satan thought he was striking the victorious blow.

What do you think of this idea of Satan using religion to cast out Satan, which in reality, is nothing more than Satan using violence in the name of God to solidify his own power in this world? Include your own ideas in the comments below! 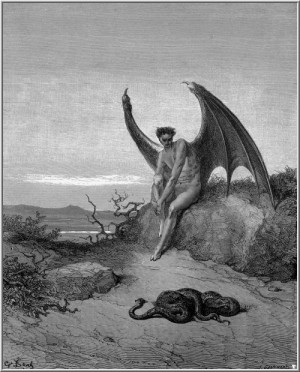 One of the great lies of Satan is in how he uses human institutions such as religion and politics to make it look like God uses violence to defeat violence. This is the great myth of redemptive violence, which is seen in almost every movie, story, and legend of history, as well as within every daily newspaper and every nightly news broadcast.

We have been taught that violence is the best way to defeat violence. This is the myth of redemptive violence.

But more than that, divinely sanctioned violence is the most successful, and can even be carried out in the name of God. But Jesus reveals in His life and ministry, and especially through His death and resurrection, the true emptiness of redemptive violence. He unmasks Satan’s lie of redemptive violence for all the world to see.

Although really, as it turned out, it was Satan himself who, in crucifying Jesus, unwittingly revealed his lie to the world. The trap that Satan had set for Jesus turned out to be a trap that Jesus had laid for Satan. This is why Paul says that if Satan had known that the death of Jesus would be his undoing, he never would have crucified the Lord of glory (1 Cor 2:8). In blaming God and finally crucifying God, Satan thought he was winning; but the death blow he dealt upon Jesus turned out to be his own. By using the power of Satan, Jesus defeated Satan, which in reality, turned out to be Satan causing his own defeat.

Satan Stole Dominion Over the Earth

It all began in the Garden of Eden. When Adam and Eve were created by God, they were given dominion over the earth. But when they sinned in the Garden, they effectively handed this dominion over to Satan. He did not steal the dominion; it was freely given to him. As a result, he now became the ruler of this age, the god of this world (John 12:31, 14:30, 16:11; 2 Cor 4:4).

Due to the nature of the dominion which God had given to Adam, God could not simply take back the dominion now that it had been handed over to Satan. God had freely given it to Adam, and Adam had freely given to Satan. The only way for God (or mankind) to get the dominion back from Satan was if Satan freely gave it back, which he was never going to do. Satan had wanted to be like God, and in gaining dominion over the earth, he became a god. Satan had an iron grip on this world, and he ruled it ruthlessly and with all dominion, power, and authority.

Under Satan’s rule, darkness, terror, death, and chaos reigned. If you have read Tolkien’s Lord of the Rings trilogy (or seen the movies), imagine what life would be like in Middle Earth if Sauron had been able to obtain the One Ring, the ring of power. The reason that Gandalf and the races of Middle Earth sought to stop Sauron from regaining the ring is because they did not want their world to plunge into eternal death and chaos. But in the biblical account, this is exactly what happened when Adam handed dominion over to Satan.

But Satan was not content just to rule by spreading darkness and terror. He wanted to get humanity to blame God for all the evil that happened in this world, and in so doing, solidify his own power even more. How did Satan do this? He used the myth of redemptive violence. He got people to believe that when evil people rose to power, whether their power was over a single person or an entire country, violence was required to overthrow that evil. And yet almost without fail, when the new rulers rose to power, they became more oppressive than the oppressors they overthrew.

In this way, the cycle continued endlessly.

In this way, Satan “casts out Satan,” and thus endlessly consolidated and amplified his own power.

We will look more at this idea tomorrow. Until then, what do you think of the idea laid out above? Do you think that Satan uses violence to make it look like God is defeating Satan, when in reality, it is Satan “casting out Satan” so that it appears that God is defeating him?