You are here: Home / Buried in the Trees and Sky

In previous posts I have argued that the symbolism of baptism is mostly gone today. In New Testament times, nearly all people immediately understood that when someone got baptized, they were symbolically dying to their past and rising again to a new life for the future. Such a ceremony would spark questions and discussion about why the person was getting baptized.

While baptism means something similar today, most people (including Christians) do not immediately grasp the symbolism. The symbolism has to be taught. Just as a joke loses its humor when it has to be explained, so also a symbol loses its force when it is explained. We need symbols which are more naturally and immediately grasped by all people so that they are compelled to ask why you are dying to your past.

The symbols should represent a break with the past and the beginning of a new future. If possible, it would also be good to symbolize death, burial, and resurrection. One way to look for symbols is to look at the burial customs of a particular culture, and then try to find a ritual, ceremony, or symbol that mimics the burial customs.

I will begin to suggest some for our own culture tomorrow, but let us work our way toward them by considering the extreme examples from other cultures around the world. 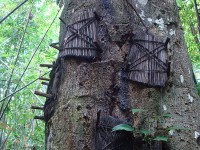 There is group of people in the Philippines known as the Caviteño. When a Cavite person is nearing death due to sickness or old age, the person goes out into the forest and selects a tree. Then the family members build the person a little hut at the base of this tree in which they will live until they die. But they are not left alone to die. The family and friends come out to hollow out the tree trunk of the standing tree.

When the person dies, he or she is entombed vertically in the hollowed-out tree trunk. The symbolism is that just as trees give life to the tribe through fruit and wood for their fires, so when a person dies, they give their life back to the tree.

So in this culture, a water baptism would not represent death, burial, and resurrection at all. But maybe when a Cavite chooses to leave their former way of life and turn to follow Jesus, it would be appropriate for them to go out into the woods and select a tree. Then live in the hut while they and their family members hollow out the tree trunk. Then, on a certain day, they get into the tree trunk where they stay for a period of time, before returning back out of the tree, as through returning from the dead.

Or take a certain group of Tibetin Buddhists who practice “sky burial.” When a person dies, the family hires a certain man of the town to go with them to barren field outside of town. There, the man cuts the dead body into pieces and feeds it to the vultures. The ritual is gruesome, but it nevertheless is a burial tradition. And once again, water baptism would be meaningless in such a culture. Is there a ceremony or ritual by which someone could symbolically give themselves a “sky burial”? Maybe they could take some bread out and feed it to the birds, although since vultures do not eat bread, maybe the person could take some meat out and present it to the vultures instead. 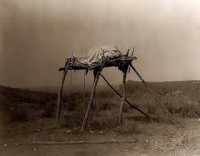 With some creative thinking, such symbolic rituals of death and resurrection could be performed in nearly all cultures for any burial ceremony. Some cultures wrap the body in cloth and dump it in the sea. In other cultures, bodies are sent down a river in a canoe, or floated out to sea on a raft, or raised up to the sky in the trees. While some of these rituals would be dangerous to do to an actual living person, maybe a replica of the person could be made out of wood or stone, and then dumped into the sea or sent down the river.

Different cultures have different customs for death and burial. In many of these cultures, water baptism would be meaningless as a symbol and a different ritual would be needed to represent the idea of dying with Christ and being raised again to a new life.

But what about in our own culture? I think that since we practice burial, there is a place for baptism, but maybe with some tweaks which better represent what is going on. There are also numerous other symbols which could be used to represent a break with the past and the resurrection to a new life for the future. We will look at some of these for our own culture tomorrow.