You are here: Home / Comparing God with Hitler

I talk weekly with people who are pretty antagonistic toward Christianity. One of them recently sent me this picture: 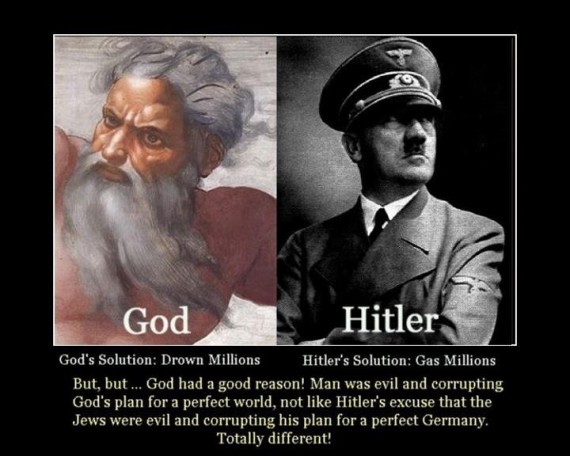 It is interesting because I am still in the middle of a long series on how to understand the flood in light of Jesus Christ, and the flood is exactly what this image talks about when comparing God with Hitler.

So how would you respond to this image?

Most Christians would say something like this:  “Well, God is God and so He can do what He wants. Hitler wasn’t God, and so it was wrong for him.”

I reject that answer. If God can behave like Hitler, but it’s okay because He’s God, I don’t think God deserves our worship.

This is a challenging proposal, and I am trying to write a book to defend it (When God Pled Guilty). But the further I go, the harder the book becomes. That is why you have been seeing fewer and fewer posts on it. I cannot decide whether to push ahead or just give up in defeat.

Any thoughts on what I should do? How do you understand the violence of God in the Bible? Also, how would you respond to that image above?