You are here: Home / Is Crusade Evangelism Effective? 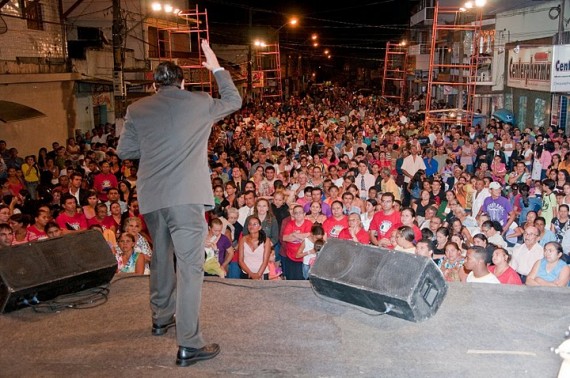 Crusade evangelism is a strategy that has been used since the First Great Awakening in mid-1700’s. It began in England and American where popular preachers gathered together large crowds of people, and preached the Gospel to them.

Some of the leading evangelists to use this strategy include D. L. Moody, George Whitefield, Jonathan Edwards, John Wesley, Charles Finney, Billy Sunday, and in more recent years, Billy Graham, Franklin Graham, Luis Palau, and Greg Laurie. And should we include Tim Tebow’s dad in there as well? Check out the Bob Tebow Evangelistic Association.

Without a doubt, millions of people around the world have heard the Gospel and received eternal life as a result of these crusades. They are, and continue to be, a meaningful and effective way of spreading the good news about Jesus Christ.

And yet, in a 1990 interview with PBS, Billy Graham himself stated his believe that only about 25% of those who come forward at one of his events actually became Christians. In recent years, studies have shown that only 6% of people who “come forward” at an evangelistic crusade are any different in their beliefs or behavior one year later. Of course, it is estimated that Billy Graham preached to more than 200 million people, and 6% of 200 million is still 12 million. That’s significant.

In recent decades, ministries that are involved in crusade evangelism have tried to increase the long-term effectiveness of their efforts by engaging local churches and ministries to perform follow-up discipleship with those who come forward at a crusade. They recognized, rightly, that the Great Commission in Matthew 28:19-20 calls for discipleship, not just evangelism. It calls for people to learn about Jesus and follow Him; not just pray a prayer or make a decision about Jesus. This is a step in the right direction.

But if crusade evangelists are taking a step in “the right direction,” what is the direction they are stepping toward? They are moving toward relational evangelism, recognizing that big tent, big event evangelism does not achieve the long-term results which comes only through long-term relationships with other people. And so they have tried to take the relational emphasis of effective evangelism and tack it on to the tail end of their events.