You are here: Home / Destroy the Devil’s Work

Since Jesus perfectly reveals the Father to us, we must view God’s actions in the Old Testament within the light of Jesus’ goal to destroy the devil’s work (1 John 3:8). 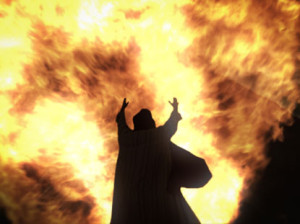 The problem with this interpretation is that we never see Jesus doing this sort of thing in the Gospels. (Yes, the book of Revelation seems to portray something different, but we’ll get to that in a later post.)

Quite to the contrary, every time Jesus has the opportunity to pour out vengeance and retribution upon other people, He not only turns away from such actions, but pointedly condemns and rebukes this behavior instead.

For example, in Luke 9:51-56, the Samaritans reject Jesus, the disciples want to call down fire from heaven to incinerate them. Where did they get such an idea? From some of the violent actions of God in the Old Testament! People who reject God are frequently incinerated by fire in the Old Testament (Lev 10:1-2; 2 Kings 1:9-12). The disciples were simply trying to follow suit with what they saw God doing in the Old Testament. But what does Jesus do? He rebukes His disciples for even having such thoughts, and tells that that these thoughts do not come from God but from some other spirit, and that He did not come to destroy men’s lives (for that is what the devil does) but to save them instead.

Jesus certainly did come to destroy the devil’s work, but His route for doing so was not conventional. Or at least, it was not the way any human would seek to do it. He did not rain down fire and death from the skies. He did not raise up an army and march off to war. He did not call on political leaders and those with money, power, and prominence to exert their influence and bring about change.

No, Jesus destroyed the devil’s works by doing the exact opposite things of the devil. He loved the unlovable. He forgave the worst of sinners. He healed the chronically sick. He fed the hungry. He empowered the weak. He extended grace to those who showed none. He was patient with repeat offenders. He did not seek to control. He never sought to enslave. He always refused to punish or condemn.

What then does this tell us about what God was doing in the Old Testament through the violence? We are drawing closer to a proposed solution… So stay tuned!