You are here: Home / Redeeming Scripture / Even the Demons Believe (James 2:19)

Almost every single time I write a post on my blog or on Facebook about how we receive eternal life from God by faith ALONE, someone  brings up James 2:19 and says “But even the demons believe!”

In this current series of posts on faith, I have previously taught about James 2:14-26 with a focus on the concept of “dead faith.” But in this final post on faith, I wanted to focus in on this famous verse of James 2:19, and show why people who quote it do not understand what James is saying.

(Note: ALL of these posts on faith are drawn from my book, What is Faith? So if you want them all in one place, along with an extended discussion about the nature of faith and how to know you believe, just get the book.)

Here is some of what we said on Twitter:

Note that I didn’t tweet the same thing to him over and over and over… he responded multiple times to one of my tweets, and I don’t know how to get rid of that when embedding a Tweet into WordPress… if anybody knows how, let me know!

@jeremyers1 No because as James 2:19b says "the devils also believe, and tremble".

@jeremyers1 The point is that if she believes a lot about Jesus, but not his resurrection is on par with the devils that had no faith N God

@jeremyers1 Brother we're arguing over semantics. The devils know who Jesus is. In Luke 4:33-34 they called him out by name. And they…

@jeremyers1 tremble at the hell that awaits them for opposing the Father, Son, and the Holy Spirit. The point that I'm making is as Paul…

@jeremyers1 written in 1 Corinthians 15:12-17 that if she doesn't believe that Christ was resurrected then her faith is in vain, and she…

@jeremyers1 as Paul said 1 Cor 15:17 she is "yet in your sins".As you said she believes in Jesus, but "not in his resurrection" is vanity…

@jeremyers1 Because as James 2:19b says even "the devils also believe, and tremble".

Here is what I was trying to say on Twitter, which didn’t get stated very clearly at all:

But none of these beliefs, even though they are correct, will give me eternal life by believing them.

According to Scripture, we must believe in Jesus for everlasting life.

So, what do demons believe?

Believe it or not (ha ha!), demons are probably more correct in their theology than most humans. Though I cannot be certain, I assume that demons believe that God exists as the Trinity, and that God is holy, righteous, and good, and that Jesus was God incarnate, born of a virgin, lived a sinless life, died on the cross, and rose again from the dead. 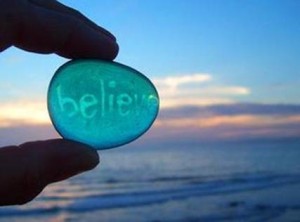 When it comes to the book of James, and James 2 specifically, lots of people quote James 2:19 out of context. They hear a pastor, professor, teacher, blogger, or evangelist say that to receive eternal life, all you need to do is believe in Jesus for it, and the objector says, “That’s not true! Even the demons believe!”

When it comes to receiving eternal life, it is not simple belief that matters, but believing in the right person for the right thing.

Below is a super brief synopsis of how to understand James 2:14-26.

James is writing to believers.

First, James is not writing an evangelist pamphlet telling people how to receive eternal life. He is writing to believers about how to live as followers of Jesus and function within the church.

The issue in James 2:14-26 is not about gaining or proving that one has eternal life, but rather, living as a profitable servant of Jesus Christ. James mentions profit several times (cf. James 2:14, 16) and the opposite of profit–being dead or useless (James 2:17, 20, 26).

The “profit” he is talking about, of course, is not monetary gain, but living as an energized, successful, fully-committed, faithful, generous, loving, caring follower of Jesus Christ. None of us want to live useless lives, but profitable lives that are useful to God and His rule and reign on earth.

Don’t just pray and believe God; Do Something!

Specifically, if you see someone who is hungry or without clothes, it is okay if you tell them you are going to pray for them, or if you believe that God can provide for them. But more than just pray for them, and more than just believe that God will give them food and clothes, why don’t you actually be an answer to your own prayers and your own faith, and give them food and clothes!?

That is what James is saying: “Don’t just believe; Do something!”

This is why people get so upset at Christians when we are faced with a troubling situation, or a dire need, and our only response is, “I’ll pray for you!” or “My thoughts and prayers are with you!”

When people are homeless, jobless, hungry, sick, dying, struggling, they don’t need thoughts and prayers. They need Christians do actually do something. This is exactly the point that James is making as well.

Again, eternal life is given to those who believe in Jesus for it.

Now, if James had stopped writing at James 2:16, there never would have been the misunderstanding about the relationship between faith and works in this passage. Everybody would have immediately recognized that James wants us to do more than just pray for people and state our belief that God can help them. We should actually do something for those in need. This point of James is pretty clear in James 2:14-16.

But he goes on to write James 2:17-26, and this is where all the problems with this passage enter. In the rest of this passage, I am not going to work though the entire passage in detail, but just provide a few of the highlights, and point you to the text of a sermon I preached on James 2 several years ago, and I also have a shorter version in Podcast episode 124 when I discussed James 2:14-26.

1. Faith Without Works is Dead

So we must never say “Dead faith is no faith” for that is absolutely not true. Dead faith exists, it is just unproductive and unprofitable.

However, Greek did not have quotation marks, and so authors used other methods to show where the objection ends and the refutation begins. They indicated this by calling the objection foolish (cf. 1 Cor 15:35-36; Rom 9:19-20). In this way, the objector in James 2 is saying everything in James 2:18-19. (See my article on “Epistolary Diatribe.”)

Therefore, the statement “even the demons believe, and tremble” is NOT from James, and is NOT in support of his argument, but is from someone who does not like what James is saying, and is objecting to the point James is making.

In other words, when we quote James 2:19, “even the demons believe” we are siding not with James, but taking the side of someone who disagrees with James.

The basic point of the objector is that he believes there is no connection between faith and works. James says that if we have faith, we should do something with it to live profitable and useful lives. The objector says,

That’s rubbish. The two are not connected at all. Take the cardinal theological belief of Judaism as an example: the belief that God is One. The demons believe this, but  it doesn’t affect their behavior. All they do is shudder, but beyond this, this still rebel against God.” So their faith does nothing for them.

Note, by the way, that faith in Jesus for eternal life is NOT what demons believe.

But this is not the belief of demons that James is writing about. The only thing demons believe in this context is that God is One, which is the central and most important belief in Judaism.

The Masterful Refutation by James

In the rest of the passage (James 2:20-26), James refutes what this objector said. 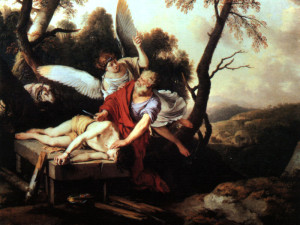 And he uses a particular event in the life of Abraham to prove that Abraham’s faith led him to obey God and perform certain actions, which in turn, allowed people to recognize that Abraham was truly God’s friend.

It is important to note that the event James is referring to takes place in Genesis 22, many years after the initial faith of Abraham in Genesis 15.

Whenever Paul refers to the faith of Abraham, he is referring to Genesis 15, when Abram was declared righteous by God. But James is referring to the events in Genesis 22, when Abraham was declared righteous by men, that is, they saw what Abraham did, and said, “Wow. He truly does believe in the God he claims to serve, and look what happened as a result! He truly is the friend of God!”

James then goes on with the knock-out punch. He has proven his point with the Forefather of Faith, Abraham, so he now takes the opposite extreme and shows how his point applies to the foreign, sinful, prostitute Rahab.

Rahab also believed something about God, and when the spies came to her, she acted on what she believed to deliver and rescue them. If she had just believed in God and done nothing, she still would have had the faith, but it would have done nothing to deliver her, her family, or the two spies. But because she acted on her faith, her faith became profitable.

James has proved his case and proved the objector wrong. If all you do with faith is believe, that is well and good, and it is still faith, but to truly be profitable, effective, energizing, and helpful in your own life and in the lives of others around us, you must act on what you believe (James 2:26).

This is the meaning of James 2.

So don’t let anyone tell you that faith is not enough when it comes to receiving eternal life. Of course it is! Jesus Himself promises it!

But when it comes to helping others, and getting rid of sin in our lives, and clothing the naked, feeding the hungry (James 2:14-26), taking care of orphans and widows (James 1:27), controlling our tongue (James 3:1-12), etc., etc., etc., just believing that God can take care of these situations is not enough.

What do you think of this explanation of James 2:14-26, and especially the statement in James 2:19 about the faith of demons? Does it help this passage make more sense to you?

Does it help it fit better with what we read in the teachings of Jesus and the writings of Paul? Has it cleared up in your own mind some of the confusion around the role of faith and works?

Let me know in the comments below, and if you want more clarification, get my book, What is Faith?