You are here: Home / The Flood According to Jesus (Matthew 24)

In Matthew 24:36-44, Jesus provides insight into the causes and events of the flood.

Furthermore, in the specific context of Matthew 24:36-44, Jesus equates those who are “taken” in this future event with the people who were taken away by the waters of the flood (Matthew 24:39). If this passage is truly about the rapture of the church, it seems strange for Jesus to equate the rescue of the church with the destruction of the people at the time of the flood.

So it seems more likely that Jesus is not describing the rapture at all, but some other future event. What future event?

The imagery Jesus uses in Matthew 24:36-44 fits best with similar imagery used by the Apostle John in Revelation 19–20. In these chapters, John describes a Satanically-inspired rebellion which results in fire destroying those who side with Satan (Rev 20:9). Both Jesus and John describe the Son of Man coming from heaven on the clouds to conquer (Matthew 24:30; Rev 19:11-16), carrion birds gathering to feast on the carcasses (Matt 24:28; Rev 19:17-18), and the passing away of heaven and earth (Matthew 24:35; Rev 21:1).

We will look at much of this imagery in a later post when we consider the violence in the book of Revelation, but the imagery is only brought up here to show that when Jesus talks about the flood in Matthew 24, He likens it to a similar form of world-wide judgment that falls upon the earth at the end of days.

The Attitude of People at the time of the Flood

Why does this second judgment come? Curiously, here in Matthew 24, Jesus does not mention any sort of sinfulness. Jesus says that at the time of the flood, “they were eating and drinking, marrying and giving in marriage” (Matthew 24:38).

There is nothing wrong with these things, as Jesus Himself ate and drank during His ministry. At one point, He was even accused of being a glutton and a drunkard (Matthew 11:19). And while He did not get married, He attended weddings (cf. John 2:1-12) and did not forbid His followers from getting married. 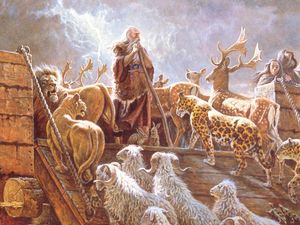 What is this attitude? What is the failure? It is living life as if nothing else matters beyond this life. It is when people fill their lives with some of the blessings of life—such as eating, drinking, and marrying—so that they ignore the signs of the times in which they live and the testimony from God about what is coming unless they all heeded the warnings and followed the ways of God (Matthew 24:32-33).

At the time of the flood, Noah served as “a preacher of righteousness” (2 Pet 2:5) who proclaimed and warned the people of the flood that was coming. But they were too busy with eating, drinking, and getting married to pay any attention or to make any changes in their lives. As a result, they were caught unprepared when the flood waters came and took them all away. So shall it be at the end of days when the Son of Man comes.

The Flood of Fire

In Matthew 24, Jesus does not describe exactly how the people will be taken away, but the parallel passage in Revelation 20:9 indicates that fire will come down from God out of heaven (cf. also 2 Pet 3:7).

Here again, however, we must be careful not to read something into the text that is not there. The imagery of “fire” in the Bible is widely misunderstood by most Christians.

It is commonly thought that whenever the Bible mentions “fire” it refers to the “hellfire” or the fire of wrath and judgment. Yet how can it be that the God revealed in Jesus Christ, who refused to rain down fire on the Samaritans and condemned such an idea when it was suggested (cf. Luke 9:54-56), would then turn around and rain down fire on those who reject Him at His second coming? It seems highly unlikely.

I will suggest another way of reading Revelation in a later post which allows Revelation to highlight and emphasize the love and grace of Jesus Christ, rather than portraying Him as a vengeful deity who comes to earth to bathe in the blood of His enemies, but suffice it to say for now that the fire which comes down out of heaven in Revelation 20:9 is related to the image of the flames of fire that burn within the eyes of Jesus (Rev 19:12), and the sharp sword which comes out of His mouth with which He strikes the nations (Rev 19:15; cf. Rev 1:14, 16).

The sword that comes out of the mouth of Jesus and His eyes of flame are not instruments of death. God is not in the business of incinerating His foes.

Instead, the sword that proceeds from the mouth of Jesus most naturally represents the Word of God, by which He creates, restores, and redeems the world. The eyes of flame represent the glory and purity of God, whose eyes burn with love and passion for all people. Though the Lord is a consuming fire, it is not that He burns with rage toward sinners, but that, as discussed above, the all-consuming love and holiness of God burns away anything that draws near which is not filled with the righteousness of God.

Scripture is clear that the fire which brings healing and restoration to the righteous people of God is the same fire that brings destruction and devastation to those who have set their ways against God (cf. Isa 33:10-16; Mal 3:2-3; 4:1-2; 1 Cor 3:12-15). 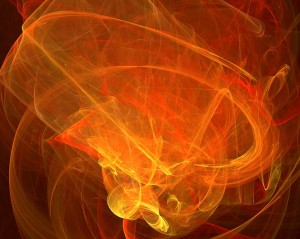 The fire of God is like the fire of the sun. Just as all the oceans of the world would do no more to quench the fires of the sun any more than would a single drop of water, so also, all the sins of all the people of all the world can do no more to quench the inferno of God’s holiness than would a single unkind thought from one person. Sin cannot taint God, for all sin is incinerated by the fire of God’s love, holiness, righteousness, and glory.

When God comes to finally and ultimately bring healing and restoration to the earth, everything that is in opposition to God is consumed by His purifying fire. The refining fire brings out the gold, jewels, and precious stones so that the wood, hay, and stubble are no more. What this means for the people who are in stubborn rebellion against God will be considered in later posts as well when we look at the topic of hell.

The point here is that when Jesus returns to set right all wrongs, to heal all hurts, and to restore all that is crooked, He comes with healing, love, and righteousness, calling all people to Himself to be redeemed and renewed.

This call for deliverance is exactly what God did for the people who lived in the days of Noah. But they would not heed the warnings, and when the flood came they were carried away by the waters.

So also, when the Son of Man comes, if people will not heed the warnings, rather than being rescued by God’s purifying fire, they too will be carried away.

This is one reason He is delaying His coming and why He asks preachers of righteousness like Noah to go out and spread the good news of the gospel of Jesus Christ to all who will hear and believe.