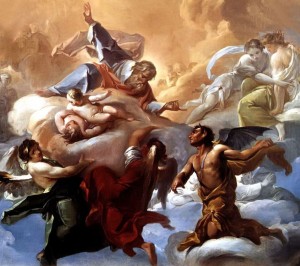 Have you ever heard someone say that God cannot look upon sin? I have, and a reader recently sent in this question:

It has been told to me that God cannot look upon evil, so why does the beginning of the book of Job portray God and satan conversing?

I have written about this before as part of the book I am writing on the goodness of God and the problem of violent portrayals of God in the Old Testament. Regarding this question of whether or not God can look upon sin or be near evil, I wrote this:

Sometimes we get this crooked view of God where He cannot look upon sin or be near sin because sin would somehow taint His holiness. Such a view gives sin way too much power and gives God way too little.

God is not like a pristine white couch upon which no one can sit for fear of it getting soiled. No, sin cannot be in the presence of God because whenever God draws near to sin, the raging inferno of His love and holiness washes all sin away. God can no more be tainted by sin than the ocean could be dyed red with a single drop of food coloring.

This is why God takes all sin upon Himself in Jesus and in the Old Testament.

Sin crushes, enslaves, and destroys humanity, but it vanishes away into nothingness at the smallest touch of God’s blazing holiness.

This idea that God cannot look upon sin or see evil probably comes from Habakkuk 1:13. In one translation, for example, it says this:

Your eyes are too pure to look on evil; you cannot tolerate wrong (NIV).

Ironically, the text then goes on to say that God does in fact tolerate wickedness and evil. Habakkuk is a book where the prophet asks numerous questions to God such as this one. The prophet Habakkuk looks around him at what is going on in the world and has trouble reconciling it with what He knows about God, and so He asks a whole series of challenging questions about God’s behavior and actions. Habakkuk 1:13 is one of those questions… the first one actually.

Habakkuk does not believe that God cannot actually see evil. No, Habakkuk knows that God sees everything that goes on in the world. From the very beginning, God saw that Adam and had sinned, and He saw when Cain killed His brother Abel, and He saw when the people on the earth became so wicked that a flood was going to destroy them all. We could go on and on throughout the Bible to see that God both knows the evil that is going on in the world, and He sees it. God sees every bit of evil in this world.

So to say that God cannot look upon sin is not accurate biblically, and is not what Habakkuk 1:13 teaches. Instead, it seems that what Habakkuk is saying is that God, by not seeming to do anything about evil, appears to be looking upon evil with approval. But we know that God does not look upon evil in approval; He disapproves it. So how then is it that the treacherous seem to be in God’s favor, and the wicked seem to win at everything? This is what Habakkuk is asking.

And if we look around in the world, we often have the same question. Why do the wicked prosper? Why do the treacherous thrive? (Jeremiah 12:1). Job asked a similar question as well in Job 21:7.

God Can Be in the Presence of Sin

Which brings us back to the specific question that was sent in. Obviously, if God cannot look upon sin or evil then God should not have been able to look upon satan, or even allow satan to enter His presence. But according to Job 1, God does both.

This dilemma goes away when we realize that it is not true that God cannot look upon sin and evil.

In fact, far from averting His gaze or blinding His eyes to all the sin and evil that goes on in the world, God dives right into the thick of it. He finds the vilest places, the most terrible times, and the evilest situations, and jumps in there.

Because He loves us too much to leave us in the darkness of sin, and because the light shines brightest in the darkest of areas.

Look at it this way: To say that God cannot look upon sin or be in the presence of evil is to deny that Jesus was fully God. Did Jesus come to this earth? Of course! Did He ignore sin and keep Himself away from all who were sinners! Far from it! Rather, He sought out the sinners. He hung around the prostitutes and tax collectors. He laid hands on the lepers and showed love to adulterers.

And on the cross, Jesus took our sin upon Himself. 2 Corinthians 5:21 says He became sin for us! He took the curse upon Himself (Galatians 3:13). 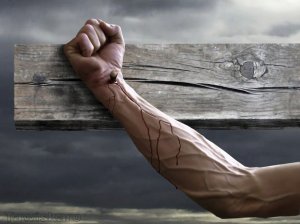 And if Jesus reveals God to us, then we can assume that God also likes to hang out with sinners and show love to the wicked. To say that God cannot look upon sin is to say that sin can defeat and defile God; that sin is more powerful than the righteous holiness of God! May it never be! God is not so weak and powerless!

So when satan comes into the presence of God in Job 1, God is not threatened by satan. God sees satan, talks with satan, and even agrees to let satan have his way with Job (which I actually have some major problems with, but that is a topic for a different post).

Instead, be grateful and thankful that God can look upon sin, and in fact, looks upon it every second of every day, and not just looks upon it, but decides to do something about it.

God loves us so much, He is willing to walk with us and be near us through the worst of our sins.