You are here: Home / Jesus Became Sin for Us 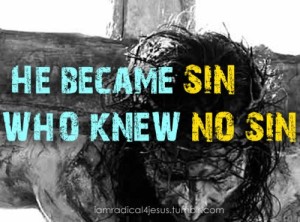 2 Corinthians 5:21 may be the most horrifying verse in Scripture, for it reveals the fact that Jesus, who was holy, righteous, and perfectly sinless, became sin for us. God made Him who knew no sin, to be sin for us.

The Horror of the Cross

Can you imagine the horror, the shame, and the guilt that poured upon Jesus while He hung upon the cross?

We, who are born in sin and who are accustomed to sin’s constant presence within us, still feel shame and guilt when we sin. Imagine then how it would feel for God in the flesh, who is perfectly holy and righteous, and for whom sin is the exact antithesis and opposite of everything about His being, to not just take on a few sins, but to actually become sin for the entire world? It is shocking and horrifying to think about.

The Love of the Cross

But it is also incredibly loving, for God, who alone knows the full ramifications and consequences of sin, knew that only in this way could He have the relationship and fellowship with us that He so desires. Only by taking sin upon Himself could He finally, ultimately, and completely defeat sin, death, and the devil. So He did it.

Jesus became sin for us and gave us His righteousness.

Jesus accepted our sin into Himself.

He breathed it in, soaked it up, and allowed it to consume Him from within. 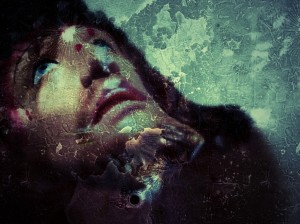 On the cross, Jesus is both the most beautiful thing the world has ever seen, and the most loathsome. Jesus is the most righteous and the most sinful. The cross of Jesus is full of love and horror.

This is a challenge thought, I know, so let us approach it from another perspective, from the perspective of God Himself. To do this, we must remember everything we have seen in this series so far (see the list of posts below).

God inspired the Old Testament authors to write about Him in a violent way so that He could do the same thing for Israel that Jesus did on the cross: Just as Jesus became sin for us, God became sin for Israel.

I will further explain and unpack this idea in future posts… for now, how does it strike you?